FASHION Annabelle Azadé, the woman behind the first sustainable ‘see-now, buy-now’ digital fashion show, tells Lucire how she went from studying at the Sorbonne in Paris, to travelling the world, to representing and showcasing eco-fashion brands in Los Angeles

The year of COVID-19 saw plenty of innovation: Zoom calls became mainstream, and digital fashion shows demonstrated that they could work, with China being one of the most successful proponents of the format. Digital media have been a leveller in so many respects, and the latest has been in fashion shows: if the companies behind London and Shanghai do not find the need to have a massive venue, then surely a single organizer could do the same? If the medium is the screen and not the physical location, then should it matter if the event was done by the British Fashion Council or by an independent? As long as the fashion is good and the show is entertaining, then it should find favour.

During the middle of 2020, Lucire received an invitation to Digital Cruise, tipped as ‘the world’s 1st sustainable see-now buy-now digital runway’, to be held in mid-September on IGTV, the “television” service of social network Instagram. Created by Wear the Future (@wear_thefuture), based in Los Angeles, the event aimed to celebrate ‘inclusive fashion’ with over 20 brands from the sustainable space.

Wear the Future’s Instagram handle is a clever visual pun—it’s easy to imagine an e where the underscore is—and running the venture is Annabelle Azadé, a graduate of the Sorbonne in Paris who began work as a journalist, and whose experience has taken her around the world before she decided to base herself in what she calls ‘the most beautiful place in the world,’ Los Angeles.

Azadé doesn’t make such a claim for her adopted city lightly: she has travelled extensively since her childhood. ‘I have been raised being curious; by the age of 11, I already travelled to Asia, Latin America, Europe and northern Africa since I had joined a professional choir by the age of nine,’ she recalls. ‘My extra time was devoted to arts and I always was pushed towards that way in my education. It was always very important to discover the world. As a result, it only made sense that I studied languages at Sorbonne for my bachelor[’s degree], so I could be ready to travel the world even more and speak several languages with people!’

However, she graduated during a recessionary time at the start of the 2010s and work was hard to come by. While starting her career in France, she wanted to travel and looked for an opportunity to depart. ‘It was really hard to find a job in journalism in France, so I decided to follow my best friend Hervé to Thailand, where he got a job related to the un and natural disasters. That’s also a time where I started being exposed to environmental topics, which eventually would lead me to found Wear the Future.

‘Once I arrived in Thailand, I found out I was one of the few journalists covering the third fashion week in Bangkok and was fortunate enough to cover the event for Bangkok 101 and other local fashion media. It was truly so much fun!’ That gave Azadé a dose of the fashion media, but by 2012, building up her résumé in journalism, she was prepared to travel again, and set her sights back on France.

‘[The global] financial crisis hit France pretty hard. After six months of living in Bangkok, I headed back to Paris, hoping for a better economy, but the country was still struggling. I heard of a friend of a friend who was hiring an intern for his brand in NYC and I applied and got the job,’ she says.
Now in the heart of the us fashion industry, Azadé soon found a job working for Marie Saeki, a boutique public relations’ agent.

‘I was working for Marie in Manhattan and had so much fun I thought to myself that PR wasn’t as boring as what our journalism teachers would tell us it was—quite frankly, I think they were just trying to make us “good journalists” by making us think that pr wasn’t an interesting job, or even less so intellectual, but it wasn’t the case at all!’

Saeki trained her and introduced her to the New York fashion scene, where she had no contacts initially, Azadé explains. ‘I went to some Fashion Week events, even stopped by Anna Wintour’s office to give her a gift … It was a huge. huge step for me! But then, at the moment I was expecting it the least, a TV channel offered me an anchor position—in Tel Aviv.’

Leaving for another country, Azadé was exposed to a lot of start-ups and innovative companies in her new role. She presented segments on technology for a morning tv show, and says, ‘I realized that tech was everywhere and could involve some fashion designers, including Danit Peleg. It was just so cool to find out that you can include some science notions while being a fashion designer and an artist!’

This experience had equipped Azadé to start her own venture, and Wear the Future was born, while she was back in France. ‘I always wanted to be my own boss—I believe my parents were my main inspiration being able to work whenever and wherever they wanted!’ In the same spirit she chose to base the new business in Los Angeles, a city with which she fell in love in 2014.

She soon gained clients in the sustainable fashion space. ‘First clients included Horizon Athletic, an Australian fitness brand launched by a female athlete that designs swimwear and athletic gear made from recycled plastic; Danit Peleg and Julia Daviy, both 3-D designers; as well as Coco Veve, a British designer that is focusing on recycled fibres.’

And last year’s show proved to be a success, being selected by one of the industry bodies whose endorsements really count: the Council of Fashion Designers of America (CFDA). The CFDA featured the show as one of its own: where it was once an IGTV special, it now appears on the Council’s YouTube channel and website. Azadé also notes that some of the fashion wound up on magazine covers (Moevir in France and Fashion Manuscript), and inside En Vie (another clever title, with a bilingual pun) in Japan.

She’s focused on getting sustainable fashion to the next stage, and believes the next area ripe for innovation is ethics. ‘Eco-friendliness is to me priority number one in what people do and how they design. I only sign brands who are strictly respectful of the environment on top of being respectful to the humans they hire.’ And we can only get there by educating consumers, she says. ‘I think the most important thing is education! We need to educate people! That’s why I’m so proud to be a mentor at the Bloomingdale’s Fashion Incubator in San Francisco.’ Those emerging designers in San Francisco, with Azadé’s guidance, could well be the next ones to watch out for as the industry responds to demands to be more ethical and sustainable. •

Classic with a twist
Karnit Aharoni lived and worked all over the world before deciding to create her luxury designer label in France. She tells Jack Yan her story and her approach to creating fashion
Photographed by Greg Alexander 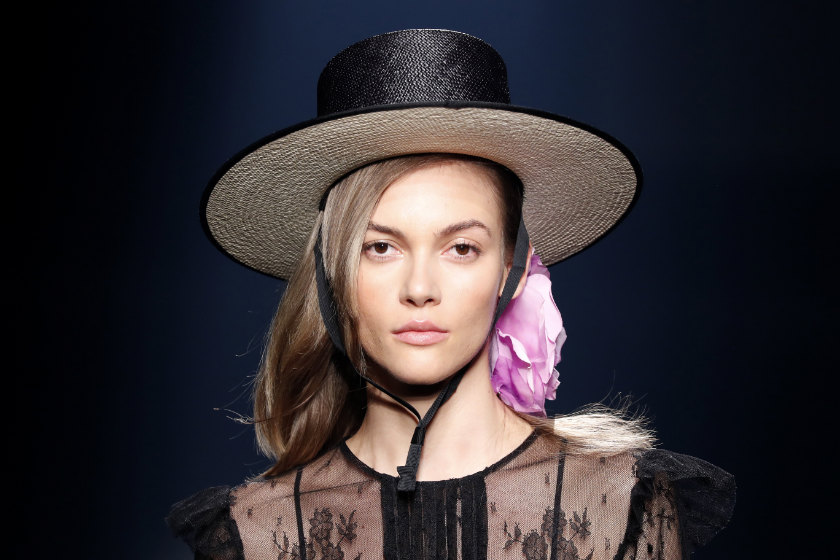 Fresh starts for the Spanish spring
Madrid wanted audiences to cast off their pandemic-affected winters as it showed vibrant spring 2021 collections. Meg Hamilton makes her picks for the season