US west coast editor Elyse Glickman and contributor Derek Poirier dish out the delicious, the disappointing and the decadence of Taste of LA, southern California’s hip antidote to hoity-toity food and wine affairs
photographed by the authors

Elyse Glickman is US west coast editor of Lucire. Derek Poirier is a correspondent for Lucire.

Over the last decade, we’ve enthusiastically gobbled up every opportunity we were offered to cover various food and wine festivals in southern California. And why not? Many of them support great causes, put us face to face with charismatic celebrity chefs and provide one-stop shopping to sample restaurants in LA people are talking about—from celebrity hangouts to farm-to-table destinations to places that put out simple, delicious dishes that speak for themselves without a mayonnaise-thick slathering of hype.

As we get older, however, we’ve become pickier eaters—and not only because of health concerns and a desire to fit into our clothes as our metabolisms turn against us. It just so happens that we woke up this year and realized it can cost as much or more to go to something like Taste of LA as it would a great meal at one of our favourite stalwart LA steakhouses or seafood havens (viz. Ruth’s Chris, the tiny and terrific Carlitos Gardel or the Pacific Dining Car, the Lobster and the Water Grill). Guests also have to wait in long, prohibitive lines at certain bally-hooed destination dining spots. The heat can get the best of one during the day. We were also sad to see fewer sushi bars (a definitive LA genre) and Asian spots strutting their stuff than in past years.

On the plus side, Taste of LA continues to be interesting thanks to its novel format: five separate three-hour sessions are staged with unique themes focused on different food trends. You have to pay separately for each session, but you can pick and choose the one or two that “speak” to your palate and preferences. We decided to focus on Farm-to-Fork (yes, this genre of restaurant is still “a thing” here in southern California) and the mixology-themed Dinner with a Twist, which also happened to showcase some of the best bites from some of the best restaurants in town.

So without further delay, here are our picks of hits and misses for this year’s Labor Day foodie extravaganza on the Paramount Studios lot.

We agree that during the day and by night, Don Julio Tequila’s showmanship and products were absolutely fantastic. All cocktails we sampled were well balanced and beautifully executed. This was made all the more miraculous since they came out of a tap and then were garnished with a fresh garnish by the bartenders. Ben Scorah of RoadSoda was the driving force behind all of the mixology technology that ensured every cocktail was perfect, including some coming out of a beer tap for a touch of extra carbonation.

At Farm-to-Fork, our first bite was Ingo’s Tasty Diner’s Brussels sprouts, which was also one of the best of the afternoon. We were this close to grabbing seconds.

We followed the sprouts with a generous and creative sampling of excellent Middle Eastern and Mediterranean offerings from 10e Restaurant. While the lines ran long at night, everything served up during the day was excellent, and provided incentive for us to go to the restaurant for a meal. The hummus was very creamy and pepper-based remoulade-like side dish had a lot of kick and personality. The beef empanadas and koftas were fantastic, with lots of flavour and spiced perfectly. The lamb chops (which drew lines at night), were heavenly.

In contrast, several of our favourite restaurants “phoned it in”. While Boa’s sliders were raw (perhaps rushed in response to antsy people in long lines in the hot sun), Bottega Louie served their famous macarons, which get people in the door downtown, but don’t provide the restaurant’s whole story. Our advice: we think you’re great and will be back, but show newbies who haven’t tried you what you have to offer.

Mayura Indian Cuisine had lovely, aromatic bites that were marred by the fact that they were served on one plate; in contrast, Spice Affair, Lum Ka Naad and other spots plated different things with varied flavour profiles separately.

In Farm-to-Fork desserts, we really liked Quenelle’s peanut butter ice-cream dessert for its interesting blends of flavour and texture. Amorino Beverly Hills Gelato offered superb gelato, though Santa Barbara-based McConnell’s was a close second, for its salty-sweet pecan cookie flavour-bright take on classic strawberry ice-cream. Dandy Don’s, a food festival favourite, did not really knock us out, even with all the sundae fixings.

Kye’s Asian and southern US fusion was nicely done, as was Aqui es Texcoco’s street tacos.

Belcampo Meat Co. has excellent restaurants in downtown LA and Santa Monica. The offering here was Labor Day-appropriate, but nothing memorable. Derek felt the all-natural hot dog with puff pastry and mustard aioli was high quality but bland in flavour. Elyse would have skipped the puff pastry all together.

The biggest surprise of the day was served up by Doomie’s Home Cookin’. Their vegan “pork” canapés were better than the real thing.

At a festival where swag and comfort are just as essential as good food, we give kudos to the Delta Sky Miles Lounge, a fantastic, air-conditioned lounge which was a good resting place on a hot day or cool evening. The airline’s biscottis were on hand as were several ice-cream and chocolate treats (Sprinkles, Coldhaus, Godiva) and many helpful staff doling out hand-held fans and other useful gadgets. The sponsoring LA Times Lounge (open for subscribers to the paper), though outdoor and not air conditioned, was also nice. The mini-bundt cakes from Nothing Bundt Cakes were fantastic. The LA Times tote bag was stylish, handy and came with a water spritzer.

It was nice to see several of our other favourites, including Public School (awesome ribs), Celestino (gnocchi with truffles), Lum Ka Naad (spring rolls and Thai jerky), Spice Affair, Badmaash, the Dog Haus, Plan Check, Gadarene Swine, Pedaler’s Fork and Hinoki and the Bird in action and offering all kinds of wonderful things. That said, we advise you to go to their restaurants to get the full effect of what they do really well. 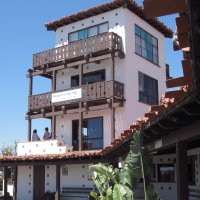 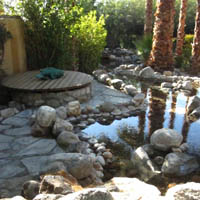 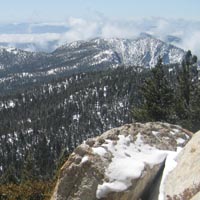 They know what’s good for you!
The women of the Pinnacle give the “fitness boot camp” concept a swift kick with a stylish and educational Palm Springs fitness weekend by Elyse Glickman