Unmistakably a Mazda The Axela, or 3 in export markets, has style in spades

Mazda’s Axela, sold as the 3 in its export markets, is a fine example of what the plucky Japanese firm can do with small volumes and lots of independent thinking, writes Jack Yan
Photographed by the author

Get quick facts on the Mazda Axela (BM) at Autocade.

I’ve often written admiringly about Mazda, most recently last week to a friend on Twitter. Here’s a company that’s really a minnow in amongst giants like Volkswagen and Toyota, punching far above its weight. In Australia and New Zealand, Mazda has a decent share of the market, and it’s earned its reputation by bucking the trend. For a company that comes from a culture of playing things conservatively, Mazda has often thrown out the rulebook, saying, ‘This is the way the world should be doing things and we really don’t care what you think.’

A few highlights included adopting, then perfecting, the rotary engine, at a time when others abandoned it; launching a multi-brand strategy during a recession (it bombed, leading Ford to take control at one stage); and having a range of retromodern cars long before Volks­wagen launched the New Beetle (one of them you might know as the MX-5, but equally there were others that were clearly Alfa Romeo- and Jaguar-inspired).

For a company that was founded to make money, rather than make cars, Mazda hasn’t really followed its own dictum regularly as passionate designers and engineers frequently take a chance. Honda’s meant to be the Japanese brand that eschews dull thinking, yet Mazda continually comes up with surprises.

Take its latest Axela, or 3 in export markets. (Using the numeral particularly makes sense in Spanish-speaking countries, where axila means armpit.) It was launched into a market in 2013 where the Volkswagen Golf or the Toyota Auris is the norm. You could almost check off a list when it comes to designing a C-segment car in the early 2000s: triangular headlamps, rising waistline, triangular sixth light. Yet Mazda decided it would go with a design that’s low-slung, cab-backward, and curvaceous. In terms of space efficiency, it’s bonkers: the car is 4,460 mm long yet a lot of it’s devoted to creating a bonnet that you might think belongs on a larger car. This is Mazda bucking the trend where it can again: this might be a mass-market segment, and others might play it safe (we’re looking at you, Toyota), but the folks from Hiroshima can’t resist being different.

Therefore, the Axela looks unlike anything else on the road. I once said to journalist Dave Moore: if Jaguar made a C-segment car, it could look like this. That might be a slight exaggeration, especially as Jaguar has since gone in a different direction with its designs, but the obsession that led Mazda to create its Eunos 500 and Sentia luxury sedans two decades ago, cars that clearly had inspiration from Coventry rather than Tokyo, remains. This is a flowing design, and one of the best lookers from Asia. It reminds you that, by and large, China is well behind the curve with its derivative designs; and only really Honda challenges Mazda in the styling stakes in Japan.

You can’t call it “European” though: Mazda’s Kodo design language is resolutely Japanese, but it’s what we like to call ‘Japanese international’. Mazda’s had a history of looking outwards—the 1966 Luce sedans had Bertone design by Giorgetto Giugiaro before he set up on his own, and the GC-series Capella of 1982, which also served as the basis of the original Ford Telstar, had European proportions. Mazda’s designers have come across a theme that has all the hallmarks of Japanese thinking, bringing ideas from nature (it’s meant to be a pouncing animal—I believe small-j jaguars count here), but mixed with proportions that appeal to occidental markets: the wheels pushed out to the corners just a bit more, the body curvature slightly fuller. Mazda says they’re creating ‘automobiles as art,’ and that’s not solely marketing hype. The third 3 looks good.

Round the back neat touches abound: even on our two-litre GLX, the base Mazda 3 in New Zealand, there are twin exhausts, and while it appears slightly undertyred (funny how 16 inches is considered undertyred in the 2010s; the Lamborghini Miura only had 15s), that only serves to emphasize the swooping waistline and its overall length.

Our reservation is the colour, which Mazda calls Titanium, and which we call brown. There is a theory that recessionary times lead to safe colours, accounting for silver and grey on our roads, and there are much nicer shades for the Axela.

Inside, things get a little better. Keyless start is a nice feature for a C-segment base model. Forget the days when driving Japanese meant reasonably nice exteriors and drab interiors; Mazda has made a decent effort to coordinate the materials inside, and the steering wheel, in particular, is nice to the touch. The plastics are of a decent quality, and that’s a revelation if your earlier experiences of Japanese interiors haven’t been pleasant. There are still quirks though: don’t expect the windows to keep winding up if you turn off the ignition during their rise; in fact, after you’ve turned it off, you’ll need to keep your finger on the switch to complete the motion. On two occasions, I thought I’d switched off the car, and I hadn’t, something which I’ve never encountered before.

The centre screen isn’t obtrusive, though we have some issues with it: it’s meant to be a touchscreen, but after 6,000 km on the clock on our test car, there are moments when touching won’t work, and you have to resort to the Idrive-like rotary knob. The dial might feel like BMW’s (another plus for Hiroshima) but the interface is less fluid: returning to a previous menu requires a leftward shift and a click, whereas just the former should suffice, in my book. The reversing camera is clear and logical; again if you’re used to Germanic solutions, then you’d easily adapt to this one. Importantly, Steve Matteson’s Tipperary typeface family is clear and not the sort of ill thought-out choice you might see at, say, Aston Martin.

However, I’ve never been able to connect my phone via Bluetooth, though the previous driver managed to connect his Iphone; and being a spartan GLX, pressing the ‘Nav’ button gives you a message telling you that no navigation has been installed. There’s an ugly plastic insert above the climate control functions that feels out of place. Pity, as there are few other reminders in the cabin that you are sitting in the base model.

The instrumentation could be clearer, with the markings on the speedometer a touch on the small side, and the LCD displays don’t quite have the contrast right. The boot space is smaller than we had expected, too.

On the move, however, it’s a quiet performer. Despite the sporty styling, and Mazda’s ‘Zoom-zoom’ slogan, it’s not terribly zoomy at all. The Kiwi-spec 3 has been tuned for comfort, with excellent levels of refinement, but even in sport mode, you don’t notice any real kick. You can’t shift quickly without paddles in the GLX, though you feel the ’box might be able to take it, and that there’s plenty more the 155 PS (114 kW) engine can give. The cruise control is among the most logical we have tried on any car, including Ford, which we long regarded as the most intuitive. The multi-link rear suspension aids the handling beautifully, and body roll is kept to a minimum. You don’t notice the length at all: this is a car that belies its size thanks to its agility and composure. Regardless of the driving wheels (and the Axela is front-wheel-drive), this is one of the sweetest handling C-segment cars around.

You need to remember, nevertheless, that this is a comfortable family cruiser, not an out-and-out sports hatch. The Skyactiv six-speed auto sees to that, too: it’s tuned for fuel economy, with the engine running at a 13:1 compression (more air), with start–stop, and returning a very respectable 35·3 mpg (8 ℓ/100 km) on a mostly urban test.

As 90 per cent of cars sold in New Zealand are automatics, and there’s evidence that autos are gaining ground, most drivers here (and presumably in Australia, Japan and other right-hand-drive nations that favour self-shifters) won’t mind that the left side of their bodies have atrophied. With the indicators on the right-hand side, I found that there wasn’t an awful lot for the left hand to do other than to steer.

Some nicer colours would draw us to the Axela and 3 more readily. The best one, Soul Red, attracts a NZ$250 surcharge on the NZ$32,795 price, while most send you to sleep. However, as a day-to-day proposition, it’s a fine effort with only a few quirks. There’s enough specialness to the design to make you feel a cut above the Auris, Focus and Golf driver. If, to you, Mazda’s about the adventurous Japanese firm that could, then the 3 has enough of the company’s magic. Just make sure you don’t get a brown or grey one. • 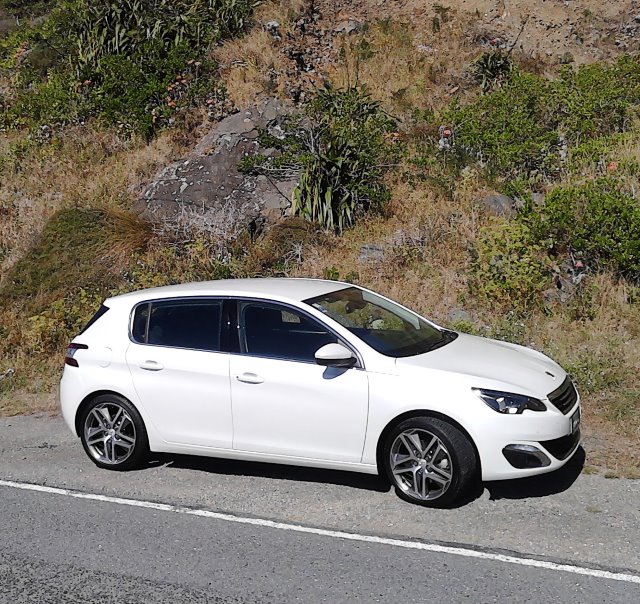