Venezia A great photo, though there were even more international things after

Return to the Biennale

Main photograph: Venezia in the spring. From top: Eva and Adèle. The crowds at the Biennale.

The hottest ticket at La Biennale di Venezia isn’t always an official one. This year, the 57th International Art Exhibition, Viva Arte Viva (open until Sunday, November 26, 2017) curated by Christine Macel, features 86 nations displayed in historic pavilions at the Giardini, Arsenale and throughout the city centre. As in past Biennales, there was too much to take in, though your correspondents dedicated three days to the proposition.

To mount a noteworthy presence at the Biennale some simple maxims hold.

2. Put your installation in a dark room. The spookier the music the better, the more obscure the repeating video the better, and remember to include self-important voices reading puzzling text.

3. If you can’t afford major electronics, place ugly and thrown-together stuff on pedestals or inside vitrines. Invest in framing, or simply nail things to walls.

4. Provide lots of talk-talk-talk, in the form of treatises, catalogue text, wall descriptions, media interviews and the essential on-site experts to further muddy the waters.

By far 2017’s finest venue was Bargenale, an unofficial floating salon-style free-for-all designed and curated by Michelle Lamy, muse–partner of designer Rick Owens. Herself an enigma of epic proportions, Lamy choreographs a high-tech barge which offers a private and exclusive watering hole for global gypsies, where the creative community assemble at long tables for legendary meals garlanded with incomparable conversation. Two years ago the barge anchored at a small island, reachable only by occasional vaporetto. This year she took her moveable feast to Giudeca, and added a boxing ring for demonstrations of how the imaginative class decompresses.

The other half of Lamy’s concept concerns cuisine. The African chef Dieuveil Malonga made a return engagement, sending out huge Tomgroute platters of African fusion edibles, spiced with Arab and Italian influences, virtuoso demonstrations of flavour, art and colour. ‘Food inspires me,’ he said. Later, Ghetto Gastro from Bronx, NY busted some food moves bringing their urban cuisine, a kind of high-style anything-goes seasoned from Grandma’s kitchen, the Cordon Bleu, and making use of the catch of the day from the Rialto Fish Market, finished with good old American brownies. Pierre, Lester, Malcolm and Jon slipped right into the Venetian groove and the crowd roared out for more. Lamy’s invitation-only party at the Giardini offered Ghetto Gastro brown-bagged picnic foccacio sandwiches accompanied by champagne, rap solos and a film première: Lamy’s daughter, fashion icon Scarlett Rouge, debuted a psychological thriller called Beyond the Walls of Eden.

Typically, the art media had a lot of contradictory opinions to fling about what they found in the pavilions. Lucire’s capsule reviews now add to the noise.

Austria: would you wait in line for 10 minutes to climb stairs to an elevated terrace inside a truck standing on its nose? Apparently 20 people at a time would. In the adjacent pavilion, you became the art. A caravan with holes enabled anonymous limbs to explore the inside–outside paradigm. Visitors climbed aboard incongruous objects affixed to the floor. Strangely, it worked.

Britain: photos of Phyllida Barlow’s supersized installation do not do the work justice. We found the actual environment to be rich in humour, inventive in materials and deliriously captivating in its scale. Site-specific constructions reaching up into skylights, jokes about weight and volume, and unbridled ambition made this a most enjoyable play space.

Canada: don’t stand too close to the fountain! However, it’s going to be hot in the coming months, so a visit to this pavilion may be imperative. Canada always delights with some expression of its particular culture, including a drenching as part of the presentation.

Above: The Canadian fountain. Below: Georgia reconstructs an abandoned house.

Georgia: a strangely affecting reconstruction of an abandoned house by Vajiko Chachkiani—Living Dog among Dead Lions—even more surprising because of a rainstorm installed inside. People peered through windows, a reverse looking-glass to a powerful metaphor. This reminded us of artist Ryan Mendoza’s reconstructed Rosa Parks house visited a few weeks earlier in Berlin (right).

Germany: the entire pavilion surrounded by security fencing, a plexi floor under which attack dogs and naked girls interacted. Record crowds waiting in line, the echoes of barking. Didn’t go inside.

Italy: ummm, not sure what to make of anatomically correct polymer castings of Jesus, an inflatible corridor and a robotic colossus fabrica. Il Mondo Magico? If technology is magic, where did the mystery go?

Korea: loved the neon exterior and the true cultural artifact inside by Cody Choi and Lee Wan. A room full of clocks operating at diverse speeds was a lesson in the economics of purchasing a bowl of soup. Well done!

Tunisia: small kiosks inside and outside the Giardni issued an alternative to visas, a key ingredient to a smart work about refugees and statelessness, The Absence of Paths. We were happy to wait in line to get our “freesa” which granted us the intellectual right to travel anywhere without restriction. A powerful statement in a small package.

USA: Mark Bradford’s monumental, highly personal installation drew from his history in south Los Angeles. Especially noteworthy were the large mixed media canvases displayed in the last room, multi-dimensional explorations into the experience of otherness in a chaotic metropolis.

The 2017 Biennale’s Ai Wei Wei was the artist Damien Hirst, whose nowhere seemed to be everywhere, embroiled in a plagiarism imbroglio. The super-earning king seems to have blatantly borrowed technique and installation from a lesser rival. Everyone seems to love Lorenzo Quinn’s monumental watery arms sticking out of the canal, holding up an endangered building. We don’t get it. Sheila Hicks’ Escalade beyond Chromatic Lands is a big, bulbous, brash yarn installation spilling off a wall. Can somebody please explain? And while we’re at it, what’s the big deal about James Lee Byars’s 20 m tall “golden tower”? It’s supposed to be about world peace, but the subject may simply rhyme with Dallas. • 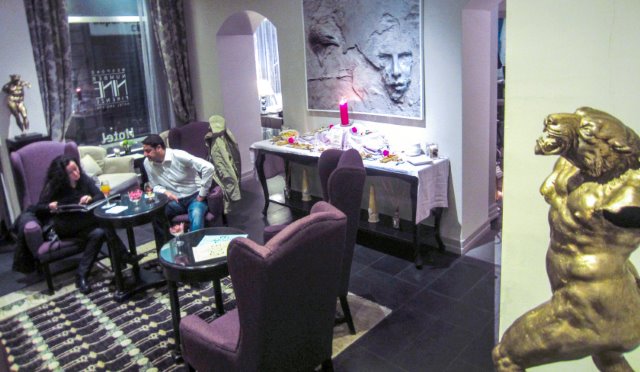 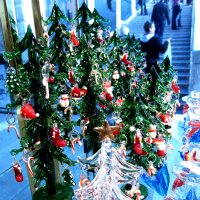 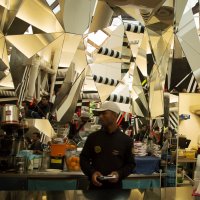