FASHION In another look back at our archives as we celebrate 20 years: Hale Bob brings a global edge and a feminine sensibility to US west coast fashion. In 2008, Elyse Glickman visited Moroccan-born, French-educated creator Daniel Bohbot and director of marketing Marc Springer
From issue 26 of Lucire

Hale Bob’s headquarters in austere, industrial Vernon, Calif. are miles away in spirit from A-list parties and red carpets, but its edifice makes for the perfect metaphor of their fashion philosophy. While Vernon is the place where the real fashion magic happens for Los Angeles, the team that has brought America’s latest “it” brand to life aims to push the envelope every season with texture and colour, even when plain prevails at other design houses.

The outside of the building has clean stylish lines, distinguishing it somewhat from the factories and warehouses. Step inside, however, and you’re greeted with splashes of colour in an art gallery-like space. Photos of celebrities extracted from the all-seeing entertainment weeklies punctuate the window sills. Look a little closer, however. The candid nature of the photos displayed send a strong message: celebrities are wearing Hale Bob by choice. Not just on the red carpet, but also to shop, hit the local coffeehouse, stroll the beach and rehearse their scenes.

While many lines coming out of Los Angeles are admittedly lines for all seasons, Hale Bob is also a line for all body types, ages and walks of life. Side by side in the marketing office, there is a photo of a pregnant Salma Hayek and a toned-up Heidi Klum, both looking amazing in the exact same dress. Lines that are effortlessly perfect on ultra-lean Eva Longoria are just as fabulous on curvy Eva La Rue. A dressy white top worn by Cameron Diaz that got retailers across the us and Europe buzzing with record orders was also a superb beach cover-up for Vanessa Minnillo. Hayden Panettiere and Sharon Stone both wear Hale Bob tunics yet look oh-so age-appropriate.

It is no surprise, then, that Daniel Bohbot will tell you that California women in general are his collective muse. They were a major reason (other than the weather) he chose to set up shop in Los Angeles instead of New York City. He also has succeeded based on his ability to tune in to their day-to-day fashion needs and whims. Back in 2001, he sensed that with the rebirth of the designer jean, there needed to be ultra-fabulous camisole tops that could dress them up. Three years ago, when skinny jeans resurfaced, he brought in tunics to help proportion-minded fashionistas look their best. More recently, when dresses came back via the catwalk and onto the streets, Bohbot then redefined “dress for success” in such a way that brought his company to international prominence. Upcoming is the launch of a companion shoe line, and next year, he mentions there will be cardigans designed to finish what the tops and dresses started.

In his airy conference room, he and Marc Springer, director of marketing, mused upon what is making the brand global, even with its definitive California roots.

Lucire: Tell us a little bit about the founding of Hale Bob, and what is now being done to keep the line vital.

Daniel: I began the line in 2001, six months before that in France, but I continued the line in LA by choice. What brought me here was the weather, but also the way of life, which is so magnetic and tied in to American and pop culture the way no other place is. There is more of a spiritedness in fashion, and people are real individualists in the way they dress. Two years ago, we added the division of dresses as we realized that look was less about jeans and cute tops and more about dresses and dressing up. For me, this was exciting, because I feel a good dress is the best way for a woman to show off her femininity and personality. From there, we found a licensee to create our shoes. And for 2008, we’re planning on adding sweaters in crochet or cashmere that will add a nice detail to finish the outfit.

How do you avoid the slippery slope of becoming too trendy, even when you do need to put out new and original things every season?

Daniel: We have gone through an evolution that involves proportion. We started with the camisoles, and then more recently evolved to the tunic. The real difference between what is trendy and what is classic is proportion and also putting out something high-quality that will work in your wardrobe year in and year out. We only use silk products in our line, whether its charmuse, chiffon, silk jersey, velvet or another treatment.

Marc: With what goes in and what goes out, dresses can be a challenge, especially when you consider hem length. We do have to address that and other issues as we go through the seasons. For example, metallics are big this winter, but they are not going to be evergreen. But even if you put it in the closet for a couple of years and brought it back out, they do have a timeless quality when they are cut and fitted well. Our burnout silks never go out of fashion, and we’ve been doing them for years because our customers respond to the beauty in the fabrics.

Hale Bob is huge with American celebrities. How will that success translate to sales internationally?

Daniel: Currently we are doing about 60 per cent of our sales in the States and 40 per cent of our business overseas. Right now, Europe (especially Italy) and the Middle East are our strongest markets, but we are also taking steps in getting into markets in Asia and Australasia.

When you were honing your craft in fashion did you, or do you still, have any particular role models?

Daniel: I like Roberto Cavalli, and I used to love Gianni Versace back in his ’80s’ height when he was in top form.

Marc: He represented a big shift in the way people looked a high fashion. They were milestones, such as the chains and the heraldry motifs that are so big right now, such as fleur-de-lis and crowns.

In addition to LA, what other places or influences have an impact on the collections?

Daniel: I love India, and find myself very inspired by what’s happening in the streets in terms of fashion. Between the colour, prints, saris and everything else going on in the streets, it is so easy to be inspired. But I tell you as much as an inspiration can come from India, it can also come from Sunset Boulevard or practically anywhere. It’s not necessarily about going far to find something inspiring, but finding beauty wherever you happen to be.

Marc: The market is more global than ever. Because of the internet, you can go online and buy things that were only available in a particular country or continent. There is a bigger world attitude to fashion. This is a big reason why we can avoid being too trendy—because we’re open to seeing what people really like instead of telling people what to wear.

So in other words, you are working on the notion that your customers are savvy and pretty much know their “look”, even if they, and you, stay up on the trends.

Daniel: We see trends everywhere, but we believe a woman is capable of developing her own trend that perfectly fits her shape and personality. While we are inspired with what is out there, we ultimately go in our own direction, and later, enable women to make their own fashion choices.

Marc: It’s the same idea that Vogue is no longer the only arbiter of what fashion is all about. It is just as much InStyle, Us, People and all kinds of publications. Celebrities have more influence on style. Kate Bosworth’s bohemian look when she did it had a more profound impact on the public than when Christian Lacroix did something like that the year before. Though models are dressed to sell something, the truth is people will respond more if they see their favourite celebrity wearing something they can relate to.

Though the models you have hired capture the spirit of the line, it seems like celebrities and the LA lifestyle are the true driving forces of the brand.

Daniel: Cameron Diaz was photographed in a certain white top [in one of the weeklies]. The very next day, we received 900 orders just for that one top from stores covering the US.
Marc: People have more of a “relationship” with celebrities, while they don’t connect that way to models. If Cameron Diaz wears something and looks great, people will embrace that. As her image, and the other celebrity photos will tell you, there is a certain ease to the clothing.

As a way of putting his trade-mark “embellishment” on the interview experience, Daniel squires me to the warehouse, where an upright regimen of tops and dresses are poised for their grand entrance into stores and, ultimately, women’s wardrobes and lives. The eye-popping shades and shapes prompt a comment from me that standing in the warehouse is much like being in a candy store. The quick-witted Daniel comments, ‘So you’re feeling hungry?’ Very much so—my fashion sweet tooth is in full tilt.

As I examine the current styles about to make their début, and Marc makes suggestions of which prints and cuts would be flattering to my figure, Daniel sizes up the Hale Bob experience as a whole. ‘Women love it because it is unique,’ he quips. ‘You can wear it and know you won’t see yourself walking down the street. You feel special when you wear it.’ • 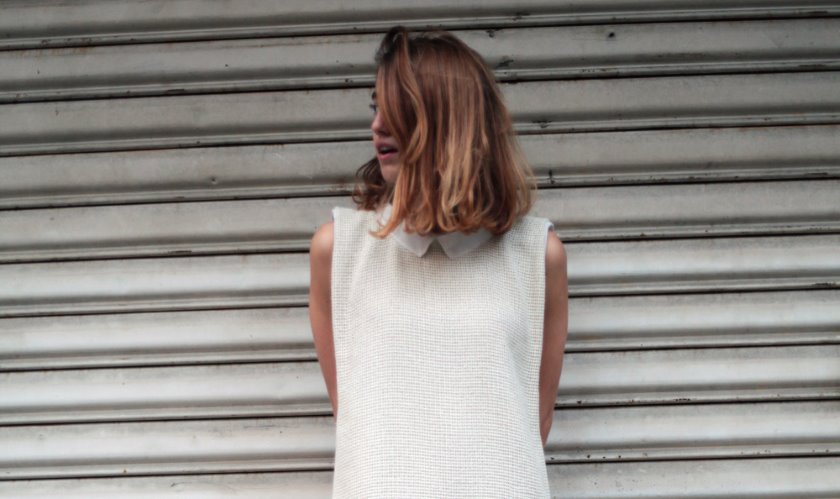