A joyful conclusion to the Vivienne Tam spring–summer 2018 show.

FASHION What are our favourite looks right now from New York’s designers? Lola Cristall makes her picks. Next week, we look at her choices for fall
Photographed by Dan and Corina Lecca, Frazer Harrison,
Edward James, Kevin Sturman and Monica Schipper
From issue 38 of Lucire

Celebrated designer Vivienne Tam sets an amusing scene to accompany her collection. Her spring 2018 collection stars famous Chinese character, Wuba, from the 2015 movie Monster Hunt. Described as a baby monster resembling a daikon radish, Wuba serves as Tam’s character of focus on the New York Fashion Week runway. As models emerged on the catwalk, a cheerfully animated backdrop with a fun dancing Wuba was the centre of attention.

Loose-fitted pieces, light blouses with asymmetrical zipped skirts, deep V-neck dresses, ruffled sleeves, denim jackets and flowing dresses were the main features of the collection. Hues from various tints of blues, pale pinks and neutrals made up the runway, with comical sequences reminiscent of Tam’s theme.

Wang Tao transformed the runway to re-create an era of lavish looks and feminine features. The new season’s collection, inspired by baroque musicians Purcell and Handel, features sophistication, elegance, and details, in a symphony of beauty. When Purcell and Handel-esque pieces were shown at the Shanghai Symphony Hall, Wang revived the composure, grace and refinement of the epoch. Wang is renowned as the leader of modern Chinese womenswear. More than simply a designer, she is also an entrepreneur.

Since Wang is also a master of draped looks, her collection includes many loose-fitting tops paired with highly well fitted skirts, as well as meticulously detailed ruffles. Hues were neutral with white, black and beige colours and accents of light blue.

A traditional east Asian theme comes alive on the Bibhu Mohapatra runway during New York Fashion Week. The wearer is powerful, defiant and seductive, flaunting delicate material vis-à-vis the structure and detail, from head to toe. The addition of crystals on some of the pieces add a touch of splendour. Mohapatra also collaborated with revered French designer, Christian Louboutin, to reveal two shoe styles, the Nosy and the Nosy Flat.

Vicky Zhang designer, Xinyin Xu, coordinates children’s wear with womenswear. The designer’s new collection is inspired by the Tang dynasty, combining the beauty of Chinese civilization with a contemporary æsthetic. The full collection is a graceful creation with stunning fabrics and attention to detail. Alluringly feminine gowns, simple floor-length dresses and boy’s suits highlight the beauty of the material and designs. The collection is all about embracing a special occasion to emphasize the wearer’s sense of opulence and luxury. •

The end of convention
Times may be uncertain, but designers are sending a clear message: it’s time to shake off convention in New York, as Lola Cristall chooses her favourites from the autumn–winter 2017–18 shows
Photographed by Thomas Kletecka and Dan Lecca
From issue 37 of Lucire 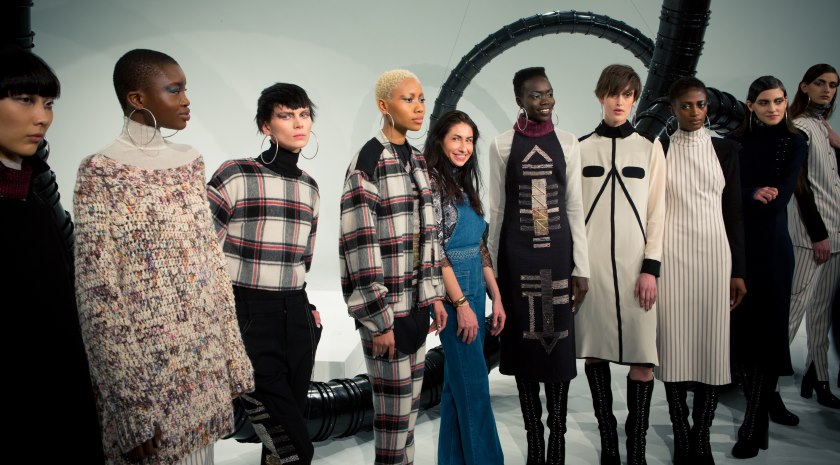