Above, from top: The Barollo Dream Stiletto with 110 mm heels in mint green and sky blue. Barollo clutch in aubergine. Barollo belt with Swarovski black and smoke diamonds.

Barollo’s website (barolloitaly.com; Instagram @barolloitaly) is understated: a simple logo, and a simple premise, to create made-to-measure footwear for a discerning wearer. The footwear is created by appointment, two words that mark them out from the mass production of others. For over a century, the Italian cobblers that Barollo employs have been refining their art and passing down their traditions. At its helm is an American, Darren Smith, its founder and creative director, who takes a no-limits approach to creating Barollo’s shoes, handbags and belts. His philosophy: ‘Barollo is not like other brands that answer to the accounting departments, which have to watch every cent to produce a shoe, handbag or belt. I produce the best and use the best materials for every part of the product I am designing. Look, feel and quality are the only things that matter.’ As of March 2020, Barollo is expanding its offerings, with Smith offering a collection with curated shoes, handbags and belts that he has made for celebrities—names that include Angelina Jolie, Marisa Tomei, Caitlyn Jenner and former Lucire cover girl Denise Richards—but for sale to the public at a new website, barolloitaly.com.

Smith has a keen eye for classic design, whether in fashion or other areas, which has set him in good stead with Barollo. From the us south, his family moved to Philadelphia when he was young. He began designing and creating bespoke shoes for celebrities in Los Angeles and New York, and for professional athletes, and through the demands of his clients, he had to ensure that his shoes were high end and that he gave his clients the best.

He had been exposed to a cobbler’s shop as a child and already had an appreciation of the craft. ‘As a child, I was completely fascinated with the machines and the hand work used to make a shoe or replace a sole. Taking leather and shaping it, to create a shoe, seemed amazing as a child, and still does!’ he recalls. ‘Most leather goods are somewhat fragile but a shoe is quite durable. Shoes are an incredible invention! We spend most of our time in shoes, our work chairs and our beds, so shoes are a critical part of our lives.’

Smith’s future career was probably influenced by his parents, too. ‘My mother was always into quality clothing and leather goods, especially shoes and handbags. Looking back, I remember shopping with my mother, as a child, and learning some important lessons from the salespeople who took care of her. One time, a woman at a shoe store pointed out what made the shoes so special and showed me the details of their craftsmanship. I remember the shoes like it was yesterday, classic and elegant, like my mother,’ he says.

‘My father also liked quality and design, and when we had special occasions we would go shopping for the right outfit, which included shoes. Every special occasion was marked with a special pair and I learned to take very good care of them, including learning how to clean and polish them, as my father was an officer in the armed forces, polishing shoes was a way of life and I still have his original kit.’

With that in mind, Italy was the obvious source for manufacturing Smith’s designs. ‘I think Italy is the greatest place in the world to work for what I am trying to build—I am in the luxury shoe capital of the world!’ he says, echoing many who have headed to la bella Italia for la dolce vita. ‘I am surrounded by the best of everything, including the food and wine! We have the best leathers in the world, the best craftsmen and women, the best suppliers … It is a dream to have this opportunity to be creating for the world in the best place on Earth! I honestly can’t believe how lucky I am and I am beyond grateful for this opportunity. It is literally a dream!’

Smith says he doesn’t have a favourite material, as his choice depends on what he is designing and making. ‘Some materials look great, but they are not the right material for the product, and sometimes you learn that after the product is finished. I have made many beautiful things and many not so beautiful. It’s a total learning process and I am always learning!’ What matters are colour and texture, he says. ‘Is it right for the product? That is the question I am always asking myself. When I design, I am looking for perfection at every level, including the packaging! Everything has to look and feel right!’

He currently spends three months at a time in Italy for his work, but is looking at doing a month on, a month off. Currently, with his high-end clientèle, he is regularly going between Italy, Los Angeles, New York, Chicago, New Orleans, and elsewhere, and says part-jokingly that ‘I want to get a pilot’s licence. I fly too much!’ Eventually, as the business grows, he would ideally like an extra person to assist with his work in Italy, which he describes as ‘amazing and exhausting’.

Despite the time he spends among the craftspeople in Venezia, Smith confesses that he had not studied the language before embarking on this venture. At school he took German, French and Spanish, ‘and speak only a little French, less German and no Spanish,’ he says. ‘In German class my nickname was Herr Gemüse (Mr Vegetable) because I was so bad at the language. Truthfully, I took German because I had a crush on a female student who was older and I got her to tutor me. I recently connected with her on social media and told her this story. She was very appreciative of that tale.’

Necessity is the mother of all invention and Smith says he faced a ‘baptism by fire’ when learning Italian. He is also gregarious in his interviews, and his outgoing nature helps. ‘I think I have learned in the best way possible, by working in Italy and being forced to absorb everything around me. It’s challenging but I think it is really the best way to learn.’

His work brought him to the attention of none other than Caitlyn Jenner, whose team contacted him for an event when he was in Italy. He recalls the first encounter, which demonstrates Smith’s attention to detail and his insistence that things be done right: ‘They wanted me to make shoes from two other sets of measurements, which I did not take. We were really short on time and I really had to say no.’

They wanted him to copy a Stuart Weitzman design but made into a larger size. Smith declined and suggested that they contact Weitzman instead. ‘After all, S. W. had the leather, the original heel, all of the accessories, he just had to make a larger size for Caitlyn. So they took my advice and S. W. made the shoe … and it was perfect!’

A year later, the team reached out to Smith again, and this time, things were better aligned. ‘I was flying to la to meet with Chris Harrison and Angelina Jolie for shoes and the timing was perfect. I drove out to Malibu, to sit with Caitlyn and we discussed her needs and we ended up creating a very nice collection for her, including pumps, sandals, opened d’orsay alligator shoes and boots. All-in-all I think she has 15 pairs now,’ he recalls.

‘She’s an amazing client and I hope to create for her again.’

Darren Smith with his Barollo Italy clients, Caitlyn Jenner (as shared on her Instagram), and Chris Harrison

Celebrities posing: Marisa Tomei in her Emmy Award outfit, back at the hotel room. Isabel May photographed by Gabor Jurina in Palm Springs Life.

While meeting with Jenner on one occasion, he spotted a pair of boots on Ashley van Metre, an American polo player now married to Kurt Busch, and felt compelled to jump up to get a closer look. ‘I got wide-eyed when I saw these amazing boots on this beautiful woman and I instantly excused myself to run over and introduce myself and take a picture for inspiration. They whole thing was really pretty amazing and somewhat organic. I am extremely grateful for the opportunities, which have been placed in front of me. I feel really lucky!’

The same sense of good fortune struck Smith when he met American mechanic and engineer Patrice Banks, who inspired the Red Shoe design that appeared in Lucire KSA in February 2020. ‘The meeting of Patrice was a complete act of God. We were attending the same digital marketing conference with 3,000 other people and we happened to be seated at the same round table. When Patrice heard that I was a shoe designer her eyes lit up and she slid me her business card, with her logo on it … Her logo was a red stiletto with a wrench as its heel.

‘The most amazing part of this story was I had six days to create a completely custom shoe and when I went to see what I had to work with … I had one pair of red stilettos in my position and they had a broken heel! This pair of stilettos with the broken was the exact red of her logo in her size. It was an act of God! If the heel wasn’t broken it would have been at our showroom in LA.’

From that, the Red Shoe was created to empower and encourage women to build careers in stem (science, technology, engineering and mathematics). The wrench heel signals that fields should be open all genders, embracing equality and diversity.

So far, Smith estimates that Barollo has made 1,000 pairs so far, each of them one-offs. ‘We make art, by hand, and it is very time-consuming,’ he says. With his new curated collection, the pieces will still be made by hand, just as they are for Barollo’s more famous clients. Each will take between 12 to 20 weeks, albeit at a more affordable price.

In this age of mass production and multinationals cutting costs to maximize their profits, it’s refreshing to find Smith and Barollo Italy continuing to stick to long-held principles that quality takes time, and there is no substitute for good design and demanding—and getting—the best. •

The Red Shoe, a limited edition inspired by mechanic and engineer Patrice Banks 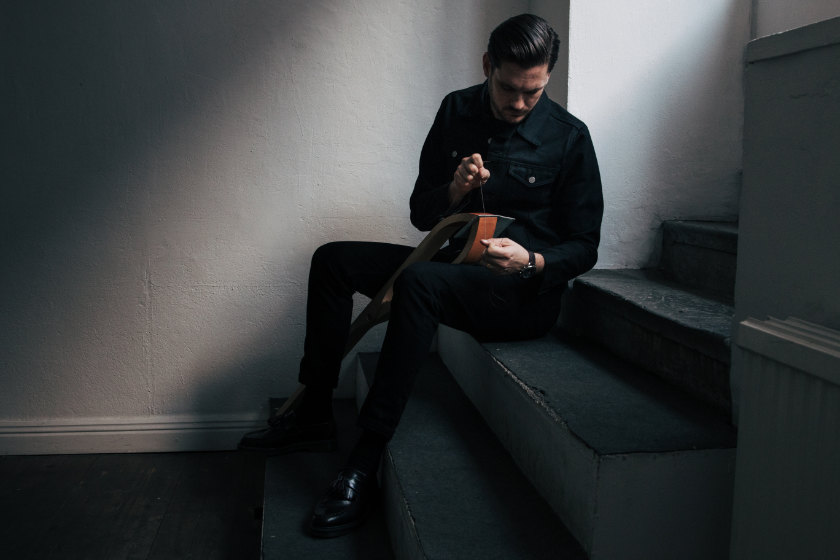