VOLANTE Stanley Moss delights in the art, architecture and photography that Paris has to offer

Photographed by the author, Paula Sweet, and courtesy of Marlborough Gallery and Rabouan Moussion
From issue 44 of Lucire and the December 2021 issue of Lucire KSA

Greetings once more from Paris, where Lucire is still lapping up the last of the autumn sunshine, and bidding welcome to the approaching winter chill. Seasonal change has not dampened the spirits of art lovers, fresh from the sparkling days of fiac last reported in our pages online. The Grand Palais, shrouded in scaffolding and hidden by a huge sponsorship banner and undergoing renovations in anticipation of the forthcoming Olympic Games, is shuttered to visitors. Instead, collectors this week flocked to Paris Photo 2021 relocated to the Grand Palais Éphémère near École Militaire, for a Eurocentric peek at the state of photo connoisseurship. From the energized divans of the VIP Lounge to the oft-seen Sold notations on many walls, it’s clear that the market resurrects, albeit judiciously. Once you’ve shown your passe sanitaire, the world is yours.

New practitioners are in evidence, yet the clearest, sharpest, most interesting offerings remain the old masters of the genre—solid, investment-grade material. Style shines through, with recognizable icons like Avedon, Man Ray, and Weegee nearly jumping off the walls, even with competition from brash, polychromatic, large-scaled, digitally based newcomers. Gallerists rooting through their storerooms during the pandemic seem to have rediscovered lesser known names, unknown artists working outside the commercial mainstream. The newbies love assemblage, 3-D layering, appliqué, multiple exposures, intense synthetic coloration, huge landscapes, and narrative. Bigger isn’t always better. In fact, scale often reveals the softness of newer offerings.

But back to the classics. At Rabouan Moussion, a life-sized photo by Phillipe Gronon of the verso of a Titian canvas from the collection of the Louvre eloquently retold the story of the painting through archival markings and labelling. A look through a book of Gronon’s explorations of the backs of famous works made tales of the front sides all the more mysterious and compelling. A tiny triple portrait of Magritte and his dog had us barking with delight. Original commercial artwork by Diane Arbus and the actual vintage book produced from it proved a wonderful grouping to encounter. At Marlborough Gallery we were treated to an exclusive private viewing of archival prints by Brassaï and Robert Frank, and admired an iconic print of harlequin-clad Lisa Fonssagrives by her adoring husband Irving Penn.

Discoveries: at Judith Andreae, prints by Johannes Brus, colleague of Sigmar Polke and Gerhard Richter, which pushed the boundaries of photography with multiple exposures, and darkroom explorations. At Galerie Sophie Scheidecker, we had the pleasure of perusing other works by the Mexican photographer Flor Garduño, whose signature white lilies illustrated the official Paris Photo programmes. Is Romania an art capital? You might think so after viewing Anca Poterasu’s offerings from Aurora and Iosif Király, samplings from a Bucharest gallery that places this former Eastern Bloc capital firmly on the international art map. Legendary performance and conceptual artist Anne Bean exhibited London gallery archival works; her innovative pieces from the 1970s haven’t lost any of their bite a half-century later. Provocative hyper-politicized work from ADN Galeria, Barcelona, by Carlos Aires, featured photographic images transferred to china plates in the Telediario series.

Above, from top: The Bourse de Commerce, with its redesign by Tadao Ando. Main atrium of the Bourse, from the first level. Paula Sweet meets Rudolf Stingel’s portrait of gallerist Paula Cooper. Works by Martha Wilson, 1974.

Bourse de Commerce Pinault collection
The hottest ticket in town for the past month has been the monumental renovation of the historic Bourse located at the end of Les Halles, by Tadao Ando. A limited array of works drawn from Pinault’s massive collection occupies the heroic space. You begin your odyssey in the dramatic, circular, light-filled ground floor atrium, and follow well marked wayfinding from floor to floor, in expertly managed crowd flow.

By far the brightest star is Ando’s extraordinary reimagining of the interior space. A lofty minimalist concrete ring topped by wide walkways overlooks the central area, which is linked by sweeping staircases and concrete passenger bridges. For the best experience, use the elevators to get to the top level, then meander back to terra firma. Many great Parisian views to be found from the upper floor windows, among them the flowing roofline of Les Halles with Beaubourg in the distance.

Noteworthy is Rudolf Stingel’s gigantic photorealist black and white painting of gallerist Paula Cooper. We were delighted to discover an installation of work by Martha Wilson, whose Pompidou installation we reported in our last letter. While the art presented is emblematic of the times and encompasses examples both memorable and forgettable, it is the architecture which dominates the visit and shows how much good can be done when an expert and loving hand like Ando’s is brought to the regeneration of a cherished classic building. •

Letter from Paris, October 2021
Travel editor Stanley Moss enjoys Paris in the autumn, with its artistic side in full swing
Photographed by the author and Paula Sweet 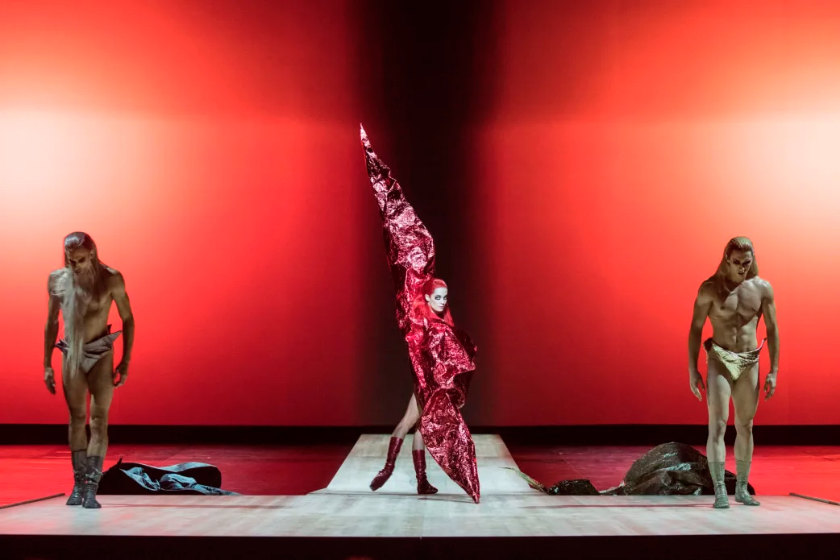