Chic and the city

When sharing our fashion finds of the week, we cannot forget Custo Dalmau, with his undeniable exceptional æsthetic through his unforgettable Custo Barcelona brand. The designer uses a vast palette of colours: this season, hot pink on black emerged to provide a radiant look, while Dalmau also used contrasting textures and prints to great effect. There was wool, lamé and faux fur. Purple shades, a vivid accessory, upped the rock-and-roll factor. Wide three-quarter sleeve tops were stunning, adding geometry to the collection. Dalmau matched many looks with ankle boots, the perfect choice for those aiming to reveal longer and leaner legs. The designer presented a sexy collection for fall, with many pieces ideal for any fashionista’s wardrobe.

Carolina Herrera once said, ‘I have a responsibility to the women of today—to make her feel confident, modern and, above all else, beautiful.’ As each collection is introduced season after season, the designer provides exactly what her customers want, with a European æsthetic mixed in with her creations. This season, with regally high up-dos, Herrera presented an elegant show. From head to toe, the wearer is true to her look: from gloves to barely-there make-up or a wide belt to highlight the waistline and a pair of large earrings to complete the ensemble. Knee-high skirts and dresses, jackets and woollen coats dominated, while at its core, Herrera worked successfully with geometric patterns. She excelled with hand-painted and embroidered details, leaving her audience more than delighted with her fall–winter vision.

New York proves to be a city unafraid of revealing hard-core elements. Jonny Cota, for Skingraft, showed numerous all-black ensembles for both men and women. Skingraft’s much talked-about début show left people yearning for more as they embraced their darker side. Women wore dark lipstick, knee-high boots and hip-hugging leather skirts; there were large hooded jackets with streaks of leather on the shoulders, contrasting the single-coloured ensembles. Cota balanced different materials, playing the contrast game with fabric. As the final looks appeared on the runway, dabs of bright gold stood out.

Charlotte Ronson presented her collection in one of the new fashion week venues, the Hub at the Hudson Hotel, a short five-minute walk from the tents. The show was DJed by her twin sister, Samantha. Her collection was feminine and chic, such as a skirt and dress with pink and blue floral prints, or an all-black pant-suit, or a pair of black pants and a sheer black top. Ronson mixed velvet with leather successfully, and carried off a fall–winter collection with an upbeat ’80s vibe.

The New York Botanical Garden held its annual Orchid Dinner at the Mandarin Oriental Hotel on February 24. The evening was a true work of art, as over two dozen tables were set to impress with majestic centrepieces. It began with a reception as well as the opportunity to purchase exceptionally rare orchids. The money raised goes to helping the Garden sustain a spectacular collection of orchids, maintain its 250-acre site, and carry on with its scientific research programme. The soirée celebrated the beauty of nature, and Baccarat, with its shimmering white crystal centrepiece, symbolized the maison’s highly recognized grand splendour (above). The social event brought people together for a good cause as guests overlooked the remarkable city atmosphere on a crisp, clear night.

QVC’s 5th Annual Red Carpet Style Party
From the city all the way to the west coast, the beginning of the year marks a busy time from Fashion Week to the Oscars. On February 28, the Four Seasons in Beverly Hills was the place to be for stars at QVC’s fifth annual Red Carpet Style pre-Oscar party.

At one of the hottest pre-Oscar events, celebrities included Nicole Richie (below), Mario López, Nick Cannon, Whitney Port and Joe Zee, the creative director of Elle US and one of the designers for QVC.

As we leave North America, we pack our bags and head to the luminous capital, Paris, from where Lucire will provide its next autumn–winter 2014–15 update. • 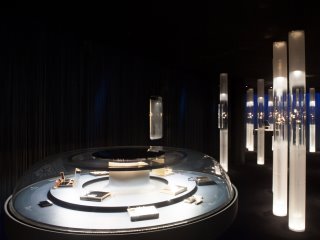