Hands across the ocean

People go to great lengths to achieve lofty goals, whether it is landing a part in a film, winning a marathon or starting a charity to help make the world a better place. However, Tanna Frederick proves that sometimes the best way to start a long, complex process is to just go out and ask somebody for a moment of their time.

When the aspiring actress arrived in Hollywood and heard about how independent filmmaker Henry Jaglom sometimes gave roles to actors who were also avowed fans of his work, she took a risk of writing him a letter to his film, Déjà Vu, to request a meeting. Though she had only seen 20 minutes of it prior to that meeting, Jaglom appreciated her initiative so much that a long-standing professional alliance grew out of it.

Today, Frederick is still going strong in her working relationship with Jaglom, starring in his romantic comedy, The M Word (co-starring Michael Imperioli and Frances Fisher) and mystery, Ovation, opposite James Denton.

Even with that fairy tale scenario, Frederick’s moxie didn’t suddenly appear in adulthood. Frederick has been seeking out and seizing opportunities since the acting bug bit her at age 8. After participating in several productions at the Steben’s Children’s Theatre in Mason City, Iowa, the precocious Frederick asked the producers and director in the affiliated adult theatre company for a role in Night of the Iguana. She adds that what gave her the courage to make such a lofty request was that the programme’s instructors made it a point to treat the children with the same respect as the adult actors in the community.

All kids participating in the Steben’s Children’s Theatre were expected to hold their own and act professionally. They were held to the same standards as the adult actors, and followed a code of conduct: never be bigger than your britches. Listen to everything around you. Do not write in the script, as it is a textbook to be respected.

‘Today, I am a small part of the larger world of filmmaking, and my ability to thrive and make the most of every opportunity I am given comes from my formative theatre training in Iowa and the discipline it instilled,’ says Frederick. ‘I also credit the support of my parents to follow my dreams. Although they were in the medical field and worked regular nine-to-five jobs, they were supportive of my efforts, encouraged me and nurtured my interests.’

The set of midwestern values and ethics Frederick holds dear has filtered into her adult pursuits in filmmaking. She not only pushes herself in the roles she takes on, but also endeavours to stretch boundaries beyond the movie industry’s Hollywood parameters. Rather than build a quintessentially “American” set in LA, she’s literally brought the industry back to her roots.

‘I maintain a house in Iowa on a lake in my home town, near where my parents live,’ she says. ‘Nine years ago, I launched the Iowa Film Festival, and every time I have the chance to go back, I want to spend time encouraging as many kids in the way I was encouraged when I was growing up. I have organized scholarships for the University of Iowa, and when the state cut funding from the music programme, I compiled some of my own resources to keep that programme moving forward in Mason City.’

In transforming her home turf into what she describes as a ‘Little Canada,’ (with its robust roster of American and Canadian film and television productions), she put together Project Cornlight. This organization contributes to the development and funding of film productions written, acted and crewed by Iowans, with the assistance of local residents.

‘We have stories to tell, and I got tired of having all of these movies set in the midwest in Iowa, Illinois or Indiana, where the filmmakers have to embellish certain details. Many of those details carry a preconception that Iowans and midwesterners in America’s heartland are bland or unworldly. Our productions are intended to show people from the heartland are diverse, intelligent, interesting and are as compelling as anybody living on the east or west coast. I am always looking for material that will not only find an audience but that I also feel totally passionate about.’

Frederick touches upon Garner, Iowa, her first film as a producer, which cast Iowa locals in key and supporting roles, as well as provided crew jobs for people living in the area. She describes the film as a ‘strong woman’s piece’ that gets its soul from the strong women she grew up around in her childhood. She remembers them as people with great resolve, especially when dealing with everyday problems and long-term survival.

Even with all the time demands of her professional life, she manages to balance it out with her philanthropic projects and athletic activities such as marathon running and surfing.

‘Project Save Our Surf,’ her non-profit promoting clean oceans and clean water initiatives, came about during an “a-ha” moment while surfing in Santa Monica. Just as she had approached Henry Jaglom a few years earlier, Frederick decided to reach out to Shaun Tomson, one of the world’s preeminent surfers, to get the influence needed to power the organization. The charity’s Los Angeles-based activities include Camp PSOS and ConSurfvation Camp, benefiting and educating kids and teens about the environment. At the international level, PSOS’s water filtration project touches communities around the world, most recently in Vietnam.

‘The idea came to me one day when I was surfing on one of the local beaches with a girlfriend, then a condom floated by, followed by a group of kids at a surf camp,’ she recalled. ‘Around that time, I had gone to my ear doctor for the umpteenth time to get antibiotic ear drops because the local waters I surfed in was giving me infections. With all of those realizations coming together, it dawned on me that kids should not have to swim or surf in this. Furthermore, when you come from a family of farmers, there’s no way you cannot be attuned to the land, shifts in nature, and the impact chemicals and pollutants will have on that fragile balance.’

She adds that the message she wants the public to receive through the Save Our Surf programmes is that nine-, ten- and eleven year-old kids are some of the best stewards of the planet anywhere. Whether the kids the group works with with live in Los Angeles or Vietnam, her goal for the group is to put the world’s future literally into the hands of the next generation, empowering them, and doing it in a way that is both responsible and effective.

‘When I was their age in Iowa, I was regularly going on camping trips and hikes, and was one-on-one with all kinds of critters and challenges along the way,’ she says. ‘I am hoping to bring that pride of place to the kids from different economic backgrounds my charity works with, giving them the same opportunities to be hands-on in their environment outside the city.’

Frederick takes pride in the fact that her Project Save Our Surf activities have brought different members of the community together, and she’s been on the receiving end of various personal accounts of how her charity work has changed lives. However, her recent journey to Vietnam enlisting the help of her Vietnam veteran father to help install 150 water filtration systems by hand brought added a deeper level of accomplishment and personal fulfilment. Though he got himself together and had a very productive life after his 18 months of service, she intuited that the experience would prompt conversation and bonding between the two.

‘When I asked my father to join us on the trip, my Polyanna-ish outlook on the world fell into place,’ she said. ‘Perhaps this would give my father a kind of “environmental therapy” … an opportunity to right a few wrongs by helping people in the communities near where he had shot and been shot at thirty years earlier. As it turned out, the outcome of that experience was profound and brought us closer. I got to know a dad I didn't previously know, just through the act of getting water filters installed.’

Maintaining an acting career, a film festival and arts’ initiative organization, numerous athletic pursuits (in competitive surfing, marathon running and tae kwon do) and an ambitious charitable endeavour cited by The Wall Street Journal and National Geographic is a balancing act. As Frederick sees it, however, making everything work and flow seamlessly is all a part of the same mindset gleaned from her Iowa upbringing: don’t complain, just go out there and make something happen.

‘Having to go to hundreds of auditions to keep my career moving forward is not that much different than going out there promoting the non-profit and asking strangers to donate money for the causes of clean water and sending underprivileged children to camp,’ she said. ‘Every small victory and defeat pushes you forward because you’re learning something. As a runner, I see all of my individual pursuits as a marathon and not a short sprint. Marathons involve a lot of pacing, patience, practice and discipline.’

She added that one thing that remains constant is that she has to keep her eyes on the on the proverbial prize to find successes even in shortfalls. In the case of the charity, she is winning that race, as more and more local kids are going to camp in California every year. Last year, enrolment in the camps increased from 500 to 2,000 in the past year.

‘Growing up in Iowa, it was instilled in me that I had to take responsibility for the Earth and the environment in some meaningful way every day,’ she said. ‘As I live in Santa Monica, and spend lots of my free time surfing, running and basing my lifestyle in Malibu, I take my responsibility of watching out for the well being for the land and coastline very seriously. While operating a non-profit organization is challenging, I never get discouraged and approach it as something that’s a part of my greater job as a citizen of this community and the world at large. It’s the right thing to do.’ • 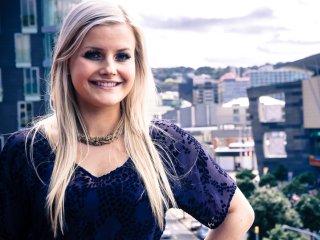 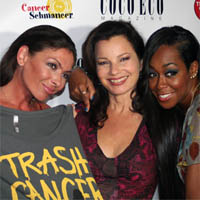 Fran Drescher, on top
The enduring actress and activist launches an ambitious extension to her popular Cancer Schmancer charity during the height of Emmys’ week, report Elyse Glickman and Cheri Fox