US west coast editor Elyse Glickman explores the environs of Kelowna, British Columbia’s foodie boomtown, the Okanagan wine country, and what’s new and noteworthy in Vancouver
photographed by the author

Beauty of the north Sushi at RawBar. Gastown: now a hip destination. Sunrise at the Cove Lakeside Resort.
The Kelowna waterfront. View at Mission Hill, the mainstay of the wineries.

I have made numerous trips to Vancouver since 2003, and have found that while this city retains a fresh, arty west coast vibe shared by Seattle and San Francisco, something new and interesting pops up with every visit. Back in 2007, when correspondent Leyla Messian and I made a winter visit, we marvelled at how seamlessly nature and technology were woven together, both in the city’s physical appearance and in its outdoorsy, multicultural way of life. Our visit to the Museum of Anthropology at University of British Columbia epitomized this.

My previous visit to the Okanagan was back in 2004, when Icewine (made from grapes frozen on the vine under strict quality conditions) was just beginning to have a high profile on the international wine market. Ten years on, the area has become more sophisticated and ethnically diverse, but still retains the welcoming, small-town qualities that make it a charming wintertime ski destination or a lovely add-on to a Vancouver or Calgary vacation.

A Paciﬁc princess
Vancouver remains one of North America’s most idyllic, cosmopolitan cities. It’s lean, green and clean, and oozing with inspirational lifestyle-driven destinations, from the cutting-edge farmers’ market ambiance of Granville Island to neighbourhoods that epitomize everything that’s right about urban renewal. These include folksy Kitsilano, the ethnic enclaves of Chinatown and Richmond, Yaletown (the sleek-and-still-chic former industrial area that’s home to the still fabulous pioneering boutique hotel Opus), and a spruced-up Robson Street that features the new Lululemon flagship store, a ballyhooed new Sephora location and a revitalized Holt Renfrew (Canada’s top-tier department store). The area around the Vancouver Art Gallery now features fantastic, creative food trucks, some from restaurants that require long waits and reservations weeks in advance.

In keeping with Vancouver’s tradition of “what’s old is what’s new”, the historic Gastown District is now a place where you will want to spend time, both day and night. While Gastown was filled mostly with casual pubs and college kids back in 2007, today the area (along with the clientèle) has come of age into a stately enclave full of trendy, unusual stores and interesting dining opportunities, many focused on innovative comfort food. Salt, for example, is an eclectic wine tasting room where excellent wines from BC (and elsewhere) are paired with local and foreign artisinal cheese, small-batch cured meats, and colourful condiments. Its constantly changing signature item is a DIY Tasting Plate you create from the selections, which change practically every day and are colourfully listed on an enormous chalkboard.

In contrast to other shopping areas, Gastown’s shopping has a European vibe with its refurbished storefronts, as well as the way many of the stores curate their collections and display their merchandise. While local institution Army & Navy is front and centre for bargains, wonderful things at all prices can be found at Athena Atelier, Artemisia, Dream (a haven for local-only brands), Ego Closet and La Differencia (a must for shoe connoisseurs). The most posh retailer in the area is Secret Location, a boutique so exclusive and elegant that it makes LA’s Fred Segal or New York’s Scoop come off like Target in comparison. Cool eyewear from Bailey Nelson and Bruce Eyewear may have you reconsidering Lasik surgery.

Though the Pacific Palisades Hotel (where Leyla and I stayed back in 2007) is now history, the normally old-school classy Fairmont Hotel family has filled its void with the Fairmont Pacific Rim. Though many of the Fairmont global luxury hallmarks can be found in the suites, rooms and lobby, it has a sophisticated, intimate boutique hotel-inspired quality thanks to impeccable service and modern touches. These include the magic hands of Grant Sceney (who innovates behind the bar and was crowned the 2014 Canadian Bartender of the Year in Canada’s biggest competition, Diageo World Class Canada), very hip nightly music performances in the Lobby Lounge and restaurants so good there may be a day when you won’t want to leave the hotel.

The hotel’s food highlights include exquisitely crafted sushi at RawBar (named the city’s first 100 per cent Ocean Wise sushi destination, for its exclusive use of sustainable seafood from the area) and Oru, its main restaurant focusing on foods from the Pacific Northwest. Its breakfast buffet, crafted from local and regional ingredients, could possibly give Granville Island a run for its money and is well worth the splurge.

Other unique amenities include free bike rentals (first come, first serve) as well as a bike path that leads you in to the famed bike trail of Stanley Park, which is intended for people of all fitness levels and should not be missed if your trip takes place in spring, summer or fall. The 11,000 ft² Willow Stream Spa is also impressive, with its nine treatment rooms and a 2,500 ft² outdoor patio with water features, as is the rooftop pool, with its hot tub, private cabanas and outdoor fire pits.

Over the mountains and through the woods
Though the agricultural region of the Okanagan Valley and principal town of Kelowna have been around for years, the wine industry that make the area the “Napa of the north” has only been going strong in earnest for a few decades. The jewel of the area’s bounty is Icewine produced by Mission Hill (the area’s preeminent winery) and other small wineries. The hand-crafted wine and its late harvest wine cousins are so coveted that much of what is exported is bought by the Chinese. Though a decent amount is imported into the US, the locals will argue that the best place to enjoy BC Icewine and their best red and white table wines are in their own back yard, paired with local foods.

Kiwis will particularly feel at home in the Okanagan, not only because the landscape and climate are similar, but several winemakers originally from New Zealand and Australia now make the region their home. Some of the white wines coming out of the area are often compared to those made in New Zealand’s Marlborough region.

Cedar Creek Winery (established in 1986, and now partnered in a business relationship with Mission Hill), is doing its part to enhance the Okanagan’s place on the wine world stage. The lead winemaker is Darryl Brooker, who brings over 12 years of experience, including a stint at Villa Maria Estate in Hawke’s Bay, New Zealand to the fore. Their ambitious ‘Block’ programme results in premium wines such as pinot noirs with their own personalities based on what part (or block) of the estate the grapes are cultivated on. For example, Pinot Noir Block 2 and Block 4 will pair with different foods, even with their being processed and aged for the same amount of time at the same time. Block 2 is new-world, California-style, while Block 4 is more Burgundian.

As wine tourism has grown internationally, so has the size and appeal of Kelowna and its surrounding towns. As the area has not become as commercialized as Napa, it remains one of the wine world’s best-kept secrets. The once-sleepy Kelowna has a hip, cosmopolitan sheen without sacrificing small-town charm, thanks in part to its unique shops. Okanagan Spirits Inc. proves grapes are not the only game in town with a tasting room, distillery and shop featuring their sublime gin, whiskey, vodka and liqueurs. Destination restaurant RauDZ manages to infuse originality and a sense of humour into their cheerful space, noted for its quirky chalkboard décor, fantastic mixology and inventive food menu. Bliss Bakery and Bistro’s baked goods and coffee provide ideal wake-up items, including a knock-out maple mocha. Other spots to watch include Bouchons Bistro and the vegetarian-friendly Lake Tai.

In lodging, Sparkling Hill currently ranks tops as the Okanagan’s ultimate luxury spa resort experience. However Grant de Montreuil, a veteran restaurant and resort chef, is making the more laid-back Cove Lakeside Resort and its Bonfire restaurant a must for œnophiles and fans of boutique fruit stands (such as Matheson Creek Farms) and produce markets with an on-premise garden that not only beautify the surrounding community but also give diners a chance to see where dinner is coming from. Sommelier Yousef Kayal is committed to deepening your BC wine experiences with the best wines you’ve never heard of.

By merging gastronomy, wine-making and fine art, leading winery Mission Hill along with Cedar Creek, Tantalus and others are ensuring their visitors get a balanced diet of wine tasting, ultra-sophisticated farm-to-table dining and visual arts, whether a winery visit is two days or a week. The executive chefs at the restaurants of Mission Hill (Chris Stewart) and Cedar Creek (Jeremy Tucker) literally use the edible and drinkable bounty from the area to add dimension to the heavenly hills and valleys.

While some of the most unforgettable cheeses in the world come from Israel, Ofri and Ofer Barmor have brought some of that magic and artistry to the Okanagan, at Carmelis Goat Cheese. Relocating to Canada to raise their daughters in 2003, the Barmors realized that there was no better “farm country” to continue their goats’ milk cheese-making. Says Ofri, ‘Nothing goes better with wine than cheese,’ and the aforementioned winery restaurants and other dining establishments heartily agree. Their facility (which will soon reopen in a new, larger location) features adorable goats, samplings and sale of their signature Goatgonzola, Chabichou and Goat Gruyere cheeses, other hard, soft-ripened and hard varieties, and artisanal gelato.

Even with all of the wonderful things to do in the Okanagan, however, Mission Hill Winery is the keystone upon which the rest of the area’s tourism and economy has been built. The collection of buildings, which sit in one of Kelowna’s most fashionable residential areas, is surrounded by lush parkland and panoramic views overlooking the rest of the valley. The principal architecture, executed by American architect Tom Kundig, resembles a college campus with its clock tower and graceful amphitheatre. The interior, meanwhile, pays homage to the majestic great wineries of Europe, with plush tasting rooms and areas, an impressive barrel room and the Terrace restaurant’s ambiance and delicious seasonal food meant for pairing, especially with their powerful red wines. • 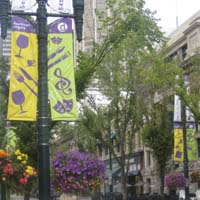 City deep, mountain high
This Canadian heartland city boasts a wealth of hip restaurants, chic boutiques, history and culture as rich as its oilﬁelds and as hearty as its cattle industry
by Elyse Glickman
photographed by the author 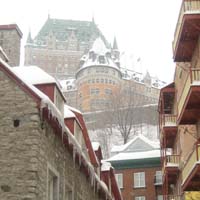 Plus ça change
This year is a great time to rediscover Québec City on its 400th anniversary and experience its move into the 21st century, writes Elyse Glickman
photographed by the author
Expanded from issue 26 of Lucire