There’s a real beauty and flow to Natascha von Hirschhausen’s designs: her asymmetric skirts have a sense of movement, as do her evening gowns and oversized dresses. An oversized sweater with bell sleeves makes the most of numerous themes—unexpected lines, beautiful draping, all leading to a stunning silhouette. Investigate each design a little more deeply and you’ll find that von Hirschhausen’s philosophy is one of zero waste, cleverly optimizing her patterns, and adopting sustainable production. She often employs certified fair organic cotton, and every component of her clothing designs is GOTS-, IVN Best- and FairForLife-certified. In other words, the value chain is independently audited annually under strict criteria for social and environmental sustainability till they arrive at the brand’s factory in Friedrichstraße in Berlin. The factory itself is transparent: people can come by and see how production is sustainably managed.

Late last year, word got out that Natascha von Hirschhausen had launched a jewellery collection with similar environmentally savvy principles, hashtagged #WasteLessFuture. Each minimalist design—whether earrings, rings, necklaces or other pieces—uses recycled silver, and is made by artisans in India, contracted through a partnership with a non-profit Fair Trade organization.

Here, 40 artisan groups in 16 states of India follow an environmentally friendly production process and use sustainable raw materials. During the pandemic, supporting the artisans became even more critical, as many lost their livelihoods as 75 million additional people were plunged below the poverty line in India.

Von Hirschhausen has had a quick rise since commencing her fashion journey as the 2010s began. She didn’t have a lifelong interest in fashion, as many designers do. ‘My first time at the sewing machine was at the age of 19,’ she explains. ‘I was still studying physics and looking for some new way to channel my creativity—for I realized in the first weeks of my study, that science is not my way to go. Sitting at the sewing machine at 19 years old I realized that I found my true calling.’

She hadn’t considered studying fashion before that. ‘Coming from a rather conservative household I didn’t dare at first to go for a creative study. But after a few weeks studying medical physics I knew this wasn’t the right path for me. To be honest the change took a lot of strength and willpower for me, for I had to go against how I was brought up.’ At that point, von Hirschhausen departed from the Martin Luther University of Halle-Wittenberg and enrolled at Media­design University of Applied Sciences, commencing her BA in fashion and apparel design.

There may have been another angle that prompted her interest in fashion. ‘People always said that fashion cannot be sustainable. But maybe therefore I always wanted to find out how sustainable fashion can be and where the boundaries are.’ Her own interest in sustainable development, she says, was ‘kind of written into my DNA.’

Her master’s topic only cemented her desire further. ‘After visiting Bangla­desh in 2014, I realized that trash and leftovers are one of the biggest problems in fashion. Since then I’m working on zero-waste designs—hopefully inspiring people to [a] waste-less future.’ That same visit also convinced her that she had to start her own brand, something that she had not hitherto weighed up. ‘Before I always doubted if it can ever be sustainable to bring a product to a market that is already overflowing. Seeing the mountains of trash and the big gap between [the] industry’s advertising and actual sustainability approach, I realized that we still need pioneers that show that sustainable fashion—or to be more precise, more sustainable fashion—is possible. So I founded my brand as a somewhat beacon project, showing that zero-waste and radically sustainable fashion is possible.’

While doing her master’s, she had co-founded Aethic.de, where research into sustainable and ecologically responsible fashion could be noted; since then, it has become a network for sustainable fashion designers. It showed a commitment on von Hirschhausen’s part. Her thesis, meanwhile, theorized a ‘very strict sustainability concept’ and she made a promise to herself that if she could stick to its standards, she would start her business after graduating.

In 2016, her eponymous label became a reality, complete with a website at nataschavonhirschhausen.com. As a self-confessed introvert, von Hirschhausen says she ‘had to learn a lot and very quickly,’ including stating her values and beliefs and standing behind her product. She is motivated by the positive change she can effect through the love she has for her collection. She says her aim continues to be one where she exceeds the benchmark for sustainable fashion design.

Von Hirschhausen’s concept might be termed ‘radically sustainable’, which she defines as: ‘Sustainability and our will for future-driven design are the core of every decision we make. We really aim to set the benchmark for sustainable design and put value over profit. For example, we are one of the few brands worldwide, who work with zero-waste design strategies and thereby reduce the waste in the production from approximately 20 per cent to less than 1 per cent for the entire collection. Plus all of our components—from the main material to the care tag—are natural, organic, fair and audited annually along the entire value chain.’

Among those values is a belief in transparency—which goes hand in hand with sustainability and integrity in branding—not just in her Berlin factory but in where her fabrics are sourced from. ‘Since the right choice of material has one of the biggest influences on the sustainability of the product I put really put a lot of work into this. Especially when I started five years ago, the choices were slim and we really had to put a lot of research and also money into finding the right fabrics, which are organic, fair, natural and audited along the entire value chain.’ The small things—yarns and care tags—were particularly hard to find: ‘sometimes we had to get creative to hold everything up to our sustainability concept, while offering an amazing product.’

Other values include being seasonless, making things to order to avoid overproduction and unnecessary transport costs, and guaranteeing free repairs to garments.

In planning zero-waste patterns, von Hirschhausen says she begins with a concept, such as, ‘I want a dress with long sleeves.’

‘I start scribbling some ideas for the zero-waste pattern and visualize it in my head. Then I start concentrating on one idea and transfer it into a first sketch and then into a digital pattern, that I put on an avatar. Once I am happy with the design I will print and optimize the digital pattern into a paper one for production.’

Adhering to her high standards saw Natascha von Hirschhausen awarded the Bundespreis Ecodesign (the Federal Eco-design Award) in 2017. ‘I was very thankful that my holistic and radical concept for sustainable fashion got recognized,’ she reflects. ‘I already knew back then, that my consistency and—let’s be honest—stubbornness regarding sustainability was quite unique, but I also know that the concept isn’t all when it comes to recognition.’

Von Hirschhausen has taken on young designers in her firm to nurture their talent and says working with a team and having a nice work environment are important.

A happy coincidence saw her connect with the India-based non-profit for her jewellery collection. ‘We got introduced by an acquaintance and then a friend of mine, by accident or chance, [who had] visited them and told me about this amazing Fair Trade production side, and all of their social programmes and the positive impact. Then we realized it was the same production that I had in mind. This talk really convinced me to go for my dream of a jewellery collection of my own.’

Jewellery, she says, completes the look of an outfit, and make it even more special, and the fact she is paying artisans in rural areas in India, who then make a concrete positive impact in their communities, is, in her words, ‘just amazing’.

She chose recycled silver, ‘because metals are one of the few things you can really recycle without losing quality. A lot of other recycling is down-cycling really, but that is a different topic.’

Her design process for jewellery is similar, in that she begins with a general idea or inspiration followed by a sketch, but then a technical drawing and 3-D model follow. Overall, the designs are more minimalist, but their subtlety complements von Hirschhausen’s clothing designs very well. She promises more jewellery collections in the near future.

When asked what’s next, von Hirschhausen says, ‘Conquer fashion with future-driven design and show that you can consistently put value over profit. Hopefully to inspire people and the industry to take responsibility and experience the joy of an inspiring, sustainable product.’ Given her strong principles in remaining authentic, we expect her to succeed. •

All the love in the world
Lauren DeCarli of Paneros Clothing has ensured that her brand stands up to scrutiny when it comes to its claims of sustainability. Jack Yan looks at the Los Angeles-based eco-fashion label
First published in Lucire issue 44 and in the November 2021 issue of Lucire KSA 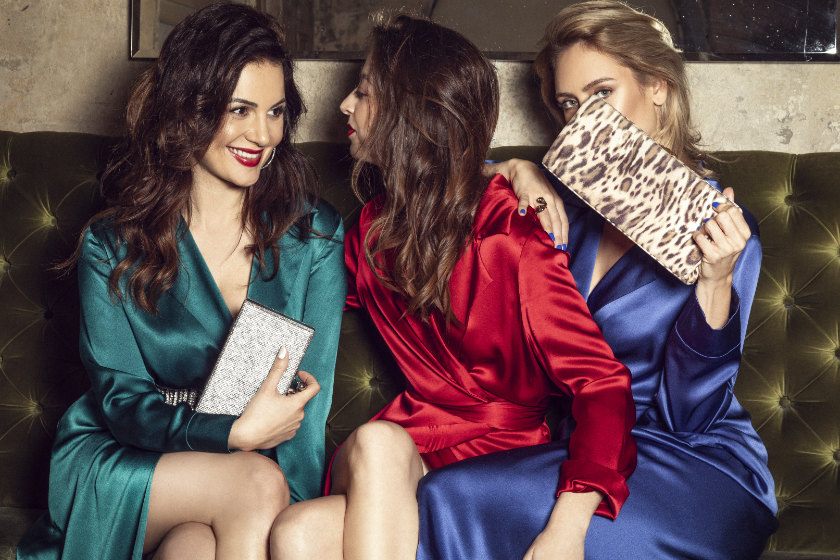