Phil Stern: from shadows to enlightenment

The renowned photographer celebrates his 95th birthday and career with the opening of a permanent exhibition at the Veterans’ Home of California. Elyse Glickman reports
photographed by the author

Some life journeys are so epic, there’s no way they could be captured in a Hollywood film, even with the best writers and directors in charge. Phil Stern, however, took matters—and a camera—into his own hands. This led to an illustrious photography career that started in Hollywood, took a sharp detour into World War II and continued in Hollywood into the early 1980s.

Stern’s career and 95th birthday were celebrated in grand style on September 6 at the Veterans’ Home of California, West Los Angeles, where he resides and continues to express his creativity through digital photography and recollections of a life so rich, not even a screenplay could capture it.

Director–producer Brett Ratner (Rush Hour 2, X-Men: the Last Stand), whom Stern first reached out to in 1998 via fax on reading about Ratner’s work in the Los Angeles Times, sized up Stern’s distinctive approach best in his keynote speech.

‘I immediately called Phil to let him know I wanted to meet with him,’ he told the packed, rapt house. ‘At Phil’s house on La Vista Court, near Paramount Pictures, he started pulling out photo after photo after photo. What was so amazing about this was that not only that every photo had one of my heroes in the movie business, but also there was a story behind every single photo. I lost count of the number … of times I went back to Stern’s house to get all the stories. But what I left with was [the sense] that Phil Stern was as much of a director as I was.’

Ratner also remarked Stern, who came to the Rush Hour 2 set, snapped five photos which he believes were the best photos ever taken of him and stars Chris Tucker and Jackie Chan, all in a moment of deep thought. ‘He made Chris Tucker look like Sammy Davis Jr, and Jackie Chan look like the Chinese Frank Sinatra,’ he mused.

While the lead characters of films like Forrest Gump and The Strange Case of Benjamin Button serendipitously happen upon key places and historic happenings, what makes Stern’s long life more compelling than fiction was that he put himself into the action.

After setting the foundation of his Hollywood career, the “action” Stern ended up taking was his military action as a member of the élite fighting unit, Darby’s Rangers, viscerally capturing some of the most brutal battles of World War II and their aftermath. Even with wounds received during the Battle of El Guettar, he stayed on and as a staff photographer for the Stars and Stripes before another wound he received in Sicilia got him sent home.

Julian Manalo, deputy administrator of the Veterans’ Home of California, West Los Angeles, points out that with so much media attention on veterans’ needs in returning from modern wars, and the consequences journalists are facing, putting themselves into danger to cover today’s global conflict, the timing of the opening of the permanent exhibition dedicated to Stern’s work couldn’t be more important.

‘I am a veteran, and I when I learned he was a member of Darby’s Rangers, that it made [my being involved in the birthday celebration and exhibition] even more of an honour,’ says Manalo. ‘What he’s still doing for the Department of Veterans’ Affairs and West Los Angeles adds to his impressive legacy. Whether you survey what he captured in Sicily and in North Africa during the war or admire what he did in Hollywood work, you don’t see this kind of nuance in photography today. Between our generation and Phil’s, it bridges a gap by presenting history in a very accessible, tangible form.’

Before and during the tribute to his life and accomplishments, Stern maintained a wise and serene presence, even as he learned (with much of the audience) that he was going to be the 278th veteran to be inducted into the Ranger Hall of Fame, literally bringing the activities of the 1st Ranger Battalion (Darby’s Rangers) home and permanently etched into the annals of history.

‘I hope the exposition of my photos will remind new generations about the battles in Sicily and North Africa during WWII,’ explained Stern before the formality and excitement of the ceremony. ‘We were fighting the Nazis way before the European invasion. Although some elements of warfare has changed, the dangers journalists face today is the same old, same old. It’s just a new enemy with different weapons.’

When asked about how he transitioned from war photography back to Hollywood documentarian, he smiled and said, ‘Well, I can say that it was much easier to take a photo of a pretty starlets on a movie set than dodging bullets.’

Actress Erin Murphy (best known as Tabitha from the 1960s series Bewitched), like Ratner, is another member of Hollywood who is a devoted follower of Stern’s work. Like Ratner, she was initially fascinated with his Hollywood images, but later developed a personal, deep-seated appreciation for his World War II images.

‘As William Asher (Bewitched’s director and producer) was also the director of the Kennedy inauguration with Marilyn Monroe, I was already familiar with some of his iconic images,’ Murphy says. ‘However, as my father fought in World War II in the Army, and my grandfather was a fighter pilot in World War I, Phil Stern’s war photography is even more meaningful to me than Hollywood images. When you consider all the historically important stuff he did during World War II, this constitutes one of the main reasons why I came today.’

Romi Dames, a co-star of the popular Disney TV series Hannah Montana, reflects the fact that Stern’s capturing of history also has the potential to reach and influence people in her generation. ‘I grew up on an army base, and my dad worked as a high school teacher for the kids of parents serving in the army,’ she said. ‘For me, it’s important that somebody went into the situation [Stern was in] to document major world events like D-Day. One of the most interesting things to consider is that our generation can go on the internet and see everything happening in the world right away because technology allows everybody to have access to everything. Back then, you had to have courage like Stern did to put yourself in those situations.’

After the war, it was “lights, camera, and action” for Stern. He was recruited by Life, Look and Colliers magazines to capture the actors (Marilyn Monroe, Sophia Loren, Elizabeth Taylor, Audrey Hepburn, Marlon Brando, James Dean, John Wayne, Frank Sinatra), musicians (Count Basie, Dizzy Gillespie, Billie Holiday, Louis Armstrong, Ray Charles, Ella Fitzgerald), politicians (John F. Kennedy) and other noted public figures who would shape popular culture in the latter half of the twentieth century. He also effectively froze time during cinema’s golden age as a still cameraman on numerous feature films including West Side Story, Judgment at Nuremburg, Guys and Dolls, and others.

Although he put down his cameras in the early ’80s (save for his visit to Brett Ratner’s Rush Hour 2 set in the late ’90s), Stern is as interested in keeping up with technology as he is with his memories and his old friends, many who came to his tribute. Alongside his 95 immortal black and white photos, there was also Shooting from the Hip, a display of his most recent images, capturing his friends at the Veterans’ Home with the same thoughtful eye for humanity and personal details.

‘I was hooked the minute I picked up that Brownie,’ Stern recalls, his voice strong and enthusiastic, even though confined to a wheelchair. ‘Living in [the Bronx], I found there was always plenty of acting going on and lot of photos to be taken,’ Stern said. ‘I love digital technology, and am still learning about it. It’s great! No more dark fingernails from the developing solution. My advice to aspiring photographers, however, remains to not trip on the strobe light cord.’ • 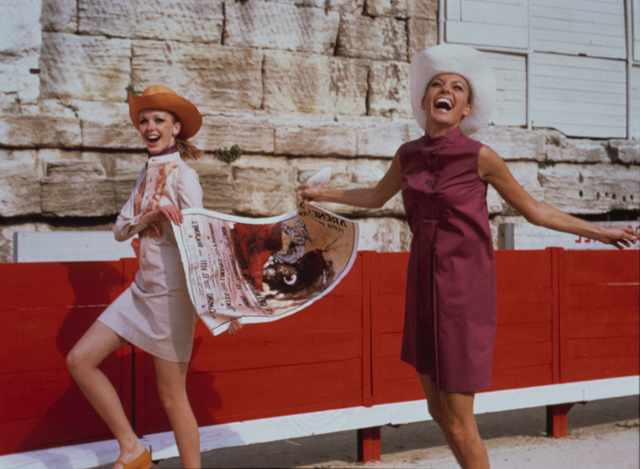