Freude am Fahren Peter Jobes discovers the BMW i3 is, indeed, a pleasure to drive

Peter Jobes is a guest contributor to Lucire.

Get quick facts on the BMW i3 at Autocade.

The revolution has arrived

Peter Jobes tests the BMW i3, unlocking its 170 hp electric motor, and finds it a pleasure to drive. The future is here
additional material by Jack Yan

There is an unwritten rule that certain inventions take a generation or more to become mainstream. The computer mouse was invented in the 1960s, but it was not till the Apple Macintosh of 1984 that people saw one for the first time—and then it took till the 1990s before many had one in their homes.

The small electric car was destined to be the answer to the problems of peak oil and the fuel crisis. Those who grew up in the 1970s—or even the 1960s, with some of the concepts emerging from the major car makers—will remember how the vision of “the future” (that’s the 1980s through to the early 21st century) was in tiny, two-seater electric cars whizzing about, solving congestion problems as well as ever-increasing fuel prices.

The tiny electric car, as presented in these visions of the future, was largely modernist and characterless, its brand indiscernible, as cars seemed to take a commodity route, whitegoods to sell alongside other practical electrical items. However, this vision was never to be: no manufacturer would be willing to give up the things that differentiated one brand from another. Cars were too important a purchase, too great an investment, to become just another domestic appliance.

Somehow, the electric car would have to convey those brand values, rethought for a new generation. And it was among the German car makers that these conversations began taking place in the 1970s and 1980s, setting the stage for what was to come.

As mentioned in Lucire issue 32, where we name the Volkswagen XL1 this year’s Car to Be Seen in, the first shot fired among automotive solutions of the future was by the Swabians, as Mercedes-Benz and Swatch teamed up on the Smart City-Coupé. Later renamed the ForTwo, the Smart was close to those early ideas from the 1970s, executed for the start of the century. It wasn’t an electric car, but it was a small commuter vehicle that could form the basis of one if needed; and it was sold as a fashion accessory more than a means of conveyance. It showed what was possible, but it could never be released with a Mercedes-Benz badge.

Volkswagen’s XL1, too, showed the world what could be done: a sleek coupé with a record-breaking drag coefficient, and to some degree, a classless design—which allows it to wear a Volkswagen badge without too many issues. It may be pricey, and its production may be very limited, but the ideas of fuel-saving and low carbon emissions are very “people’s car” (we’re talking 0·9 l of diesel per 100 km, or 314 mpg [Imperial], and 47 g/km of CO2).

But when you are BMW, and the entire brand is built on ‘The Ultimate Driving Machine’ and ‘Freude am Fahren’, then neither of these approaches could really work. Enter the i sub-brand.

In 2011, when Lucire first covered BMW’s creation of a new brand to market its Mega City Vehicle electric car, we knew the Müncheners were on to something. BMW’s i cars might not be ultimate driving machines, but they had to present something special, above what its rivals were delivering. In February of that year, i was announced as comprising models that had ‘BMW’s LifeDrive architecture, featuring an aluminium chassis housing the powertrain and a passenger cell made with lightweight carbonfibre-reinforced plastic,’ we wrote, and there would be two models: a sporting i8, previewed in concept form in Tom Cruise’s Mission: Impossible: Ghost Protocol, and the i3, the production version of the Mega City Vehicle.

Both gave off a premium feel when previewed over the last three years, enough time for the everyday punter to get used to the notion that BMW would launch models beyond its regular, X and Z ranges, and to become accustomed to the models’ future-oriented looks. But the real test was what they would be like behind the wheel.

As a young writer I am inclined to look at things through the lens of Ernest Hemingway. What would Hemingway say? The thought lurks in the back of my mind as I give the BMW i3 a once-over. One area I’m pretty sure Papa would frown heavily at is electric cars. No petrol, no gearbox, no grunt.

My own reaction had been accordingly dismissive, a fact I don't think was lost on the BMW staff who talked me through the spec; their answer to my scepticism? Throw me the keys.

I beeped into the car and dropped the key in my side pocket: there’s no need to plug it in as the proximity sensor knows they’re in the vehicle. It really is as simple as pressing the start button.

The dash lights up with a beautifully large, widescreen, centre console and a smaller screen with vital statistics sits just behind the steering wheel. Looking around the cabin I sense a revolution and have the vague feeling I may be on the wrong side of it.

There are so many things I’m cynical about: the handbrake being a button, for a start, and the lack of a gearbox, and the layout of the cabin and the ominous doubts about whether I’ll be able to take off from the lights as quick as whoever is next to me. I’m sat in the future wondering whether I belong in the past.

The first thing I notice on releasing the handbrake and moving into reverse is how beautifully responsive the car is. Power in reverse is instant and plentiful; the rear parking sensors are the most impressive I’ve experienced and within moments I’m pulling out into city traffic and moving off.

From the inside, this car runs almost silently and, judging by the pedestrians stepped who out in front of me, I suspect it’s similarly quiet outside. Thankfully the brakes offer immediate, yet smooth, response.

We nip around the city with agile ease and any fears about being slow off the mark are dismissed the moment you accelerate. It feels quick, 0–30 mph (0–48 km/h) coming faster in the i3 than in the performance M3 (0–60 mph [0–97 km/h] comes in 7·2 seconds.) A fantastic urban drive, then, but the cynic in me is unsure how it will handle a motorway.

My cynicism was dismissed as I quickly reached the speed limit and coasted easily along in traffic. For an electric motor it has a surprising amount of torque. They claim that the i3 packs 170 horses into its lithium–ion battery and from this experience I can believe it.

The interior on the model I drove was grey with tan leather and a eucalyptus trim that’s possibly the most beautiful use of wood in a car I've ever seen. This car is chic and comfortable. From the outside the grille has a surprisingly butch look, with blue accents adding a sexy twist; this car may be an electric but it’s no wimp.

You feel that this car is perfectly designed for urban driving. It’s sensitive and agile, quiet and responsive, like gliding along on a carpet of velvet.

The i3 fulfils the premium aims of the sub-brand, along with a sense of driving pleasure. It’s not that far, then, from what people have come to expect from BMW.

The revolution is here, and you may count me as a convert. • 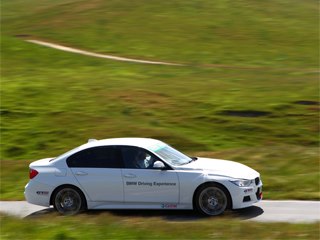 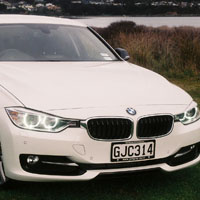