The musts The Brandenburg Gate and Charlottenburg, Berlin

Elyse Glickman has a short time in which to make the most of Berlin, and manages to get a good taste of the German capital
photographed by the author

Berlin, 25 years after its reunification, is larger than life—restaurant and shopping scenes included. A two-day stay in town barely allows one to scratch the surface of its dramatic evolution. In order to make the most of my 48 hours, I turn back to my rule of thumb that the best discoveries in town will either come in small packages or in unexpected places, and be where locals hang out on a regular basis. Suggestions from my local guides prove indispensible.

Miriam Bers (an art historian and former curator who runs the GoArt Agency, a boutique agency that prepares exclusive art and culture trips), and I spend the morning in Mitte, a former Jewish quarter. While the Kurfürstendamm is a vibrant mix of Broadway, Fifth Avenue and Rodeo Drive (and has some lovely boutiques in the mix such as Olbrish and its edgy, origami-style leather bags), Mitte is where one will find the most interesting ateliers and boutiques that Bers says defines Berlin style.

Mitte’s architecture and interior design, where the various buildings appear sewn together, makes for a very modern shopping environment even though the integrity of the original buildings is left intact. Boutiques with the most statement making-yet-wearable clothing include Lala Berlin, Nix, the Happy Shop, Baerck, Starstyling and Kaviar Gauche. Mulackstraße is often cited as the favourite street in the Mitte for souvenir shopping—those clothing pieces and accessories that will have everybody talking back home.

From top Charlottenburg. A view from near Museum Island. Typography on a building in Mitte. Boutique Shah. A T-shirt at the Kurfurstendamm. At Lala Berlin. Ice-cream at Fräulein Frost. An atelier in Mitte. Inside Nix.

As we finish our tour of Mitte at Lala (where I come close to buying a sweater, but remind myself I live in Los Angeles), Bers points out that Berlin’s identity as an art hub has given way to public spaces that blur conventional retail rules. For example, while there are salons all over the US and Canada that serve cappuccino and have boutique space next to their shampoo, Bers explains hairdresser Shan Rahimkahn has taken “the day of glamour” to great lengths with his complex in Gendarmenmarkt (a swanky neighbourhood near the ‘Museum Island’). The salon itself is an alluring presence, down to its new hair care line. Adjacent to Rahimkahn’s hair salon, one will find an artfully merchandised fashion and accessories boutique (curated by wife Claudia) and café with excellent soups, salads and desserts. While the KaDeWe department store’s—noted for its palatial, two-floor gourmet food space—is a retail standard-bearer, the Rahimkahn’s more intimate variation of the concept has proven so successful that a second location on the Kurfurstendamm (their version of New York’s Fifth Avenue) recently followed.

After bidding goodbye to Bers, I meet with Berlin Tourism’s Karin Willams at Chipps, a Mitte institution famous for making vegetables the main course, and proteins and optional side. Over carrot–coconut soup, beet strudel and serviettenknödel (German dumplings), she advises I spend the rest of the day wandering around the museum island and my second afternoon perusing the up-and-coming Neukölln area, which is where the now ultra-fashionable Mitte neighbourhood was a few years ago.

On the second day, I walk from my hotel (the Crowne Plaza) to the subway, which in turn, whisks me to the Charlottenburg Palace, the only surviving royal residence in the city. En route back, I stroll through the Savignyplatz neighbourhood, which offers posh shopping by day and sophisticated nightlife after dark. After a quick lunch at a reliable kabab take-away spot near my hotel, I head to the Daniel Libeskind-designed Jewish Museum Berlin, the second most popular tourist attraction in Berlin offering a very comprehensive look at Jewish life in Germany, not just during the Holocaust, but over the course of many centuries. In 2013, the museum even dared to explore what it means to be Jewish in Germany during the 21st century in The Whole Truth: Everything You Always Wanted to Know about Jews, a controversial exhibition spotlighting cultural biases, Jewish identity and stereotypes.

When I emerged from the subway in Neukölln, I found that although upscale retail is creeping in along the main boulevards, the multi-ethnic integrity of the area remains. While the small residential streets have many hidden treasures in the form of vintage shops and designer ateliers crafting clothing and accessories from recycled materials, there are other wonderful finds, including Bretzel Company Berlin bakery, Fräulein Frost Ice Cream and Sing Blackbird (a coffee shop-vintage store hybrid) .

Neukölln’s Türkischer Markt (open Tuesdays and Friday, and running along the south side of the Landwehrkanal from Kottbusser Damm) was originally conceived by and for the local Turkish community. However, in recent years, it has expanded to include food vendors from India and Africa, as well as artisans sampling their home-made honey, desert toppings, baked goods, spice blends and organic juice. You will also find other European swap meet staples, including socks, leather gloves, hand-made Ipad and Iphone cases and, of course, vintage clothing.

My final meal in Berlin is at Volt, across the canal from the Türkischer Markt. The décor and location (a former power plant certified as a historic landmark) epitomizes what has made Berlin an ultimate restaurant destination beyond the food. However, as one of Berlin’s breakout culinary stars, its chef and owner Matthias Gleiss is keenly aware that every detail of every dish needs to be perfect beyond its presentation.

‘As culinary trends evolved, so did my own cooking,’ says Gleiss, who points out he has two very different but equally ambitious tasting menus, one vegetarian and one with proteins that in his hands defy German culinary conventions even while paying tribute to its foundations. ‘It wasn’t just how to cook the ingredients but also how to present them in ways that would appeal to modern customers coming to my restaurant. While the ingredients are familiar to people who grew up around this kind of food local to Berlin, we’re surprising them with new approaches, textures and combinations, even though we want to keep the integrity of the recipe that inspired the dish.’

While people around the world are inspired by the progressive workings of Germany’s finance and industrial sectors, restaurants and shops running the gamut from drop-in to destination will certainly give stylish travellers something else to envy connected to her high standard of living. •

Frankfurt: bright lights, medium-sized city
Elyse Glickman heads to Frankfurt, every inch the business town, and manages to duck out for outlet shopping in Wertheim Village, in part two of our German travel series
photographed by the author and courtesy Wertheim Village 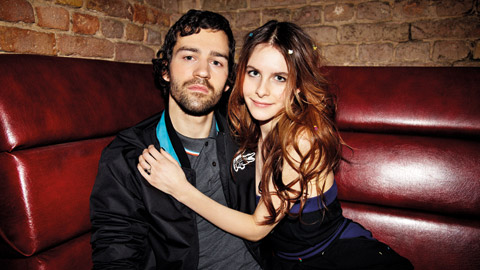 Lacoste Live takes campaign to Berlin
The Lacoste Live campaigns has shifted to another cool location for autumn–winter 2011–12: Berlin