Ingenuity, taste, intensity: it is no wonder Paris is metaphorically referred to as a stylish female figure by some. The French capital gives birth to numerous talented designers year after year while veteran designers continue to hold the torch of success. As we tour the autumn–winter 2014–15 collections, this holds true: familiar names appear alongside new ones, as we examine Romona Keveža, Swarovski, Elie Saab, Ole Yde, Léa Peckre’s phenomenal taste for Maison Lejaby, Valentin Yudashkin, Fátima Lopes’ in-vogue styles at the Lido, and Maria Francesca Pepe’s ultra-hip jewellery line at Première Classe.

During Paris fashion week, there are more than just shows: there are highly awaited presentations discreetly tucked away. Romona Keveža’s new season’s collection was presented at the Westminster Hotel located on the famous rue de la Paix, a street of luxury stretching from la Place Vendôme to the Opéra. The designer is an artist who merges the classically elegant structures of haute couture with the convenient cut of ready-to-wear, permitting a woman to wear a Keveža piece in the day or jazz it up with accessories for the evening.

Her line was launched in 2009 and continues to take red carpets by storm. Celebrities who have worn a Keveža piece include Lady Gaga, Penélope Cruz, Angelina Jolie, Nicole Kidman, Norah Jones and Eva Longoria. This season, the designer uses an intense colour palette, creating an exclusive lavishness as striking gold and enticing red dominate.

Swarovski, an Austrian-based company, focuses on dazzlingly crystals. A simple swan is its Swarovski’s main logo, a globally recognized emblem. The company was founded in 1895 and lives on as a luxury brand providing men and women with sophisticated creations or simple designs. Swarovski crystals have an inevitabilty about them in today’s fashion scene, as shimmering studs stand out on sunglasses, jewellery, writing equipment and numerous other designs.

During Paris fashion week, the Swarovski showroom, located on the rue Saint-Honoré, welcomed invitees to view their new season’s collection while also showing an array of other pieces derived from past collections. The autumn–winter 2014–15 collection is based on the notion of simplicity: single crystals provide a multifaceted image. The wearer can flaunt a simple accessory or inject more pizzazz with a matching ensemble. The multitude of façades in each crystal displays a complexity, helping it stand out on the wearer.

The ultimate intersection of haute couture style with a ready-to-wear flair can be found at Elie Saab. An immense tent overlooking la Place Concorde, located at the Éspace Éphémère at the Jardin des Tuileries, is the setting, complete with a glossy black runway within. A pantsuit matched with a windblown cape with a fur collar opens the show; Saab revives traditional looks with a sense of excellence and precision. From casual wear to evening wear, the designer has it all, from sexy ensembles, revealing a bit of skin, to more formal pieces. This collection is inspired by the works of the late Mark Rothko, an American painter, who was known for his simple geometric figures on a canvas, including rectangular or square shapes, where the obscurity of one shade emphasized the cooler tone of the other. Saab mixed the painter’s visual techniques with his own: intense red and dark black mark mystery; floral designs helped give the collection an overall diversity. Saab also explored the wild side with accessories, adorned with valued skins including mink and crocodile. 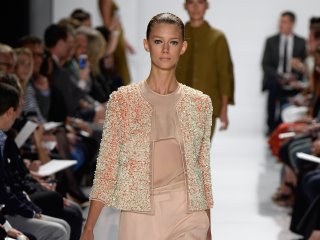 Simple and sheer for a New York spring
Lola Saab is impressed by the feminine looks during the spring shows in New York, even though her week kicked off with a more masculine event
photographed by Dan Lecca and courtesy Fashion GPS Radar