While Bangkok still reigns as one of Asia’s great shopping and cultural cities, Elyse Glickman returns to Thailand to discover there’s more to love, including a variety of cultural treasures that await in the country’s north
photographed by the author

Thai culture, food and fashion are hot, figuratively and literally. This is stating the obvious, but what’s there not to like? It seems as if everybody loves its balance of spicy, savoury and sweet flavours along with appealing textures and colours that enable all of it to bridge the gap between the exotic and the approachable. I loved it enough to go back after a first visit in 2011.

It goes without saying that Bangkok’s most important historical venues (the Grand Palace, Wat Pho, Wat Arun, Lumphini Park), like Thailand itself, merit repeat visits. Active palaces and temples you may encounter along the way are also worth visiting as they are a living form defined by the same æsthetic hallmarks. Culture blends seamlessly into fashion and home design, and nowhere is this more evident than with the Jim Thompson House, an exquisite residence-turned museum paying homage to the Jim Thompson, who was credited for transforming Thai silk into a global industry and disappeared in Myanmar in 1967.

Ayuthaya, an hour north of Bangkok is a must-do, especially if your Thailand visit only allows for time in Bangkok. The culturally rich area includes Ayutthaya Historical Park, the tree Buddha (one of the most photographed Buddhas in the world) and Bang Pa Inn, a former summer palace for Thailand’s royal family, still occasionally used for state events.

If you get to the northern reaches of Thailand, essential stops include Wat Chedi Luang, Wat U Mong, and Doi Suthep Temple in Chiang Mai City, and Wat Phra That Doi Tung temple just outside town. The nearby villa (flanked by a huge botanical garden) was home to the late Princess Mother (mother of Thailand’s present king), whose life and philanthropic activities are commemorated. In Chiang Rai province, Wat Rong Khun, a contemporary and controversial modern structure designed by Chalermchai Kositpipat in 1997, requires at least an hour to fully appreciate the internal murals and the fanciful architecture on the outside. While the ‘White Temple’ was damaged by an earthquake in May 2014, it is still visually spectacular and provocative, even in a state of repair.

Food, folks, fun and fashion
The same holds for fashion shopping, especially in Bangkok. It’s easy to get caught up in the maze of shops driving the centrally located “mall neighbourhood” of Siam Square, which is spreading as fast and as wide as the reputations of it-brands and designers like Tango, Thakoon Panichgul and Koi Suwannagate. It’s easy to spend a week at any of the larger malls like the Siam Paragon or Central World. However, Siam Centre, a diminutive mall credited with starting the whole Siam Square explosion a few decades back, is still the essential place to start a shopping spree if you want to focus exclusively on clothing and accessories from Thailand-based designers on the rise. The flagship of Tango has moved into a larger, more opulent space to showcase an expanded line of apparel as well as their now more covetable (and expensive) bags, belts and shoes.

Two of the newest shopping oases on the scene are Asiatique, the Riverfront (opened 2013) and Terminal 21 Shopping Centre (opened 2012), both bringing taste and creative spark to the ever-expanding Bangkok shopping landscape. Terminal 21 Shopping Centre is built on a premise where each floor represents a major “city”, such as Paris and Tokyo, with a mix of chain store and one-off boutiques that correspond to the public perception of that destination. Foodies will best appreciate it if they go directly to Pier 21, the Thai-centric section of the “San Francisco” floor’s expansive, clean and well organized food court. This is the perfect first stop–lunch spot for first-time visitors, as well as one of the city’s best-value, and the perfect introduction to different regional Thai and Thai-Chinese cuisines, including a few dedicated vegetarian stalls. A family of four can eat for about US$10, picking and choosing new things or familiar favourites amid the clean grid of stalls.

Chatuchak Weekend Market remains the top bargain-hunting destination, but if the miles of stalls overwhelm, or you prefer a little less digging in your treasure hunting, head to Asiatique. The 1907 warehouse and its surroundings on the Chao Phraya River have been transformed a Thai cultural theme park underwritten by Chang Brewery. While Asiatique’s sit-down restaurants could just easily exist in Atlantic City or Santa Monica, Calif., our local host brought us to an outdoor kiosk specializing in Isaan food, a pungent, hot and spicy regional style from Thailand’s northeast. Sticky rice is ordered in abundance to quench the heavy use of different chili peppers, hot basil and fermented flavours in the green papaya salad, larb (ground meat salad), grilled pork and grilled chicken.

If you’re going for the all-out luxury experience in Bangkok, the five-star Shangri-La Hotel still scores high marks, with its plush suites, million-dollar views of the river, nicely outfitted fitness centre (no shortage of elliptical machines!), Chi Spa, impeccable service and a most impressive pan-Asian breakfast and brunch buffet (which includes breakfast ice cream and yoghurt with muesli and enormous chunks of fresh fruit, as well as very respectable northern Indian breakfast fare). Though not in the physical centre of town, the Shangri-La Hotel is also walking distance from river cruises, water taxis and the famed SkyTrain, which puts the best of new and old Bangkok right at your feet.

On this trip to Bangkok, we split our stay between sibling hotels Hilton Sukhumvit Hotel and the DoubleTree by Hilton Sukhumvit Bangkok, which not only have all the requisite upscale Hilton room appointments and amenities, but also particularly nice breakfast buffets and fantastic cocktails that can be sipped on beautiful pool decks. After an Italian meal at the Hilton, we checked out the chic Banyan Tree Hotel and its Vertigo & Moon Bar before launching into a street food crawl in Bangkok’s Chinatown, alive with trilingual signage, sights and aromas and sights representing a compelling fusion of pan-Asian culture.

Though the food at Le Meridien Chiang Mai was not worth writing home about, the rooms were comfy and cocktails and the pool deck were delightful. The RatiLanna Riverside Spa, however, was sublime—almost a smaller version of Bangkok’s Shangri-La Hotel—from its palatial lobby and suites, a fruit-heavy breakfast, to a beautiful little day spa and a wonderful opportunity to participate in giving alms to Buddhist monks at sunrise (hence, food for the soul). Although Le Meridien had a great location, smack dab in the middle of one of the city’s popular night bazaars (including one section selling gorgeous hand-crafted sterling and gold jewellery made by the Karen tribe), we could have luxuriated at the RatiLanna for a week without getting bored.

With Thailand’s year-round tropical heat and a bounty of fresh fruit, coconut, herbs and spices, it’s no wonder cocktail and juice-bar culture thrives and inventiveness abounds. Bangkok’s “sky bars”, (including Sirocco, featured in The Hangover 2) are still going strong, thanks to creative cocktail menus with concoctions designed to beat the year-round heat. Back on earth, however, there are numerous street market juice stands, casually fun expatriate Mom-and-Pop pubs such as the Queen Bee, and buzzy American-style bar-restos such as the New York City-inspired Bottoms Up in Bangkok’s trendy Thonglor neighbourhood, which had some of the most sophisticated and best-crafted cocktails in the city centre.

Above Scenes from the Taling Pling restaurant, and street vendors.

It’s fun to see how popular local restaurants like Taling Pling and Thanying in Bangkok and Wanlamun in Chiang Mai get creative with hydration, with their lengthy menus of non-alcoholic combinations of tropical fruit, coconut water, green and black tea and lemongrass as well as things less familiar to the west such as pandanus fruit juice. If you desire a caffeine fix between hydration breaks, you can’t go wrong with local coffees. The Starbucks signs are everywhere, but if you seek out places like the Doi Tung Café in Thailand’s northern cities, promoting the home-grown stuff as well as the profits benefiting northern Thai communities, you will be richly rewarded, whether you prefer coffee straight or frapped into their one of their Macadamia nut signature drinks.

In Bangkok, you’ve got a selection of massage and spa options, from reliable and inexpensive storefront spots to posh spas operated by the city’s five-star resorts and hotels. However one place that brings both together beautifully is the traditional Thai massage-offered Rarinjinda, where your massage and oils are customized, the surroundings are tasteful, the pressure applied is perfect and there’s lovely hot tea and a comfy chaise waiting at the end of your session.

Above Crab, dessert and drinks at Wanlamun in Chiang Mai. Below Temple at Chiang Mai. 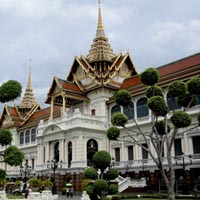 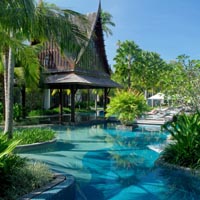 A perfect haven away from home
Janejit Sooksombatisatian rates the Twinpalms Phuket resort as one of the world’s ﬁnest, an unforgettable experience with a dose of professionalism at every turn
photographed by Tanya Sooksombatisatian and courtesy Twinpalms
from issue 28 of Lucire 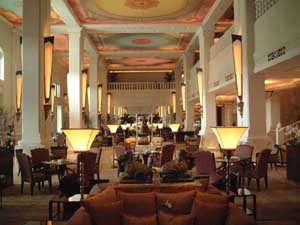 Getting to know you
Lucire at Asia’s best luxury hotel, the Regent Bangkok—a haven in the Thai heat with a concierge’s database that includes astrologers and amenities that are “the business” in the city by Jack Yan