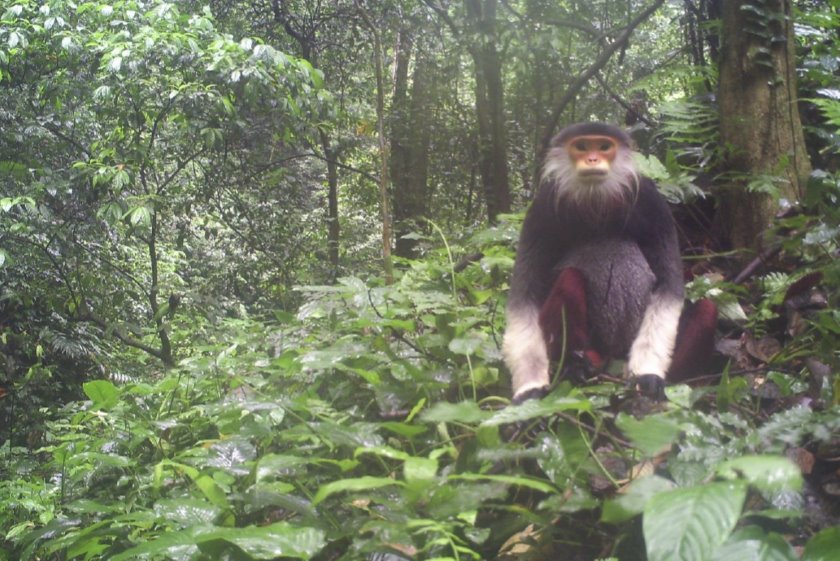 Above: The red-shanked douc, or monkey, one of the endangered species that the Body Shop’s Bio-Bridges programme will protect.

On Tuesday, the Body Shop unveiled its Bio-Bridges programme, which aims to regenerate and protect 75,000,000 m² of forest.
The programme will not only see forests protected from exploitation and unsustainable harvesting, the Body Shop wants to ensure that animals and plant species within them thrive.
The first project is the Khe Nuoc Trong forest in north-central Vietnam, home of the red-shanked douc, saola (known as the Asian unicorn and one of the rarest animals on earth), Bengal slow loris and Burmese python. All of these species are threatened by hunting and illegal logging, and the Body Shop notes that nearby habitats are still suffering from the effects of Agent Orange used during the Vietnam War. The World Land Trust and Viet Nature Conservation Centre are working with the Body Shop, patrolling the forest and setting up camera traps, while working with the local community, promoting sustainable forest use and farming.
Promoting this project to Body Shop customers is an in-store and online campaign called Help Reggie Find Love, featuring Reggie, a red-shanked douc. Each customer transaction will restore and protect 1 m² of habitat in Khe Nuoc Trong.
Christopher Davis, director of corporate responsibility and campaigns for the Body Shop, said, ‘We want to focus on actively enriching the world’s biodiversity. These areas of forest in Vietnam are biological treasure troves that are being destroyed through poaching and illegal logging. Bio-Bridges are an innovative way to create protected corridors of biodiversity that allow the wider forest to flourish and its inhabitants to breed and thrive. In Vietnam, within five to ten years we hope to be able to see endangered species multiply. We’ll be promoting Help Reggie Find Love online and in our stores in 65 countries around the world, helping raise awareness of this serious issue in a different way and allowing our customers to make a direct and positive impact with every purchase.’
The company has embarked on this latest corporate social responsibility programme as part of its new global Enrich Not Exploit commitment launched in February. It recognizes that protecting and promoting biodiversity is good not only for the planet, including combatting climate change, but for the natural ingredients it sources for its products.
The second Bio-Bridge programme begins in late 2016 in the Garo Hills in India, in partnership with World Land Trust and Wildlife Trust of India.