Our friend, Greg Murrell of Ryder Salon, for KMS California, directed the hairstyling at the Stolen Girlfriends’ Club autumn–winter 2011 show, entitled Last Night’s Party.
We’ve got our hands on the notes for the show that were issued to the media, which gives a bit more of the behind-the-scenes thinking to the collection. 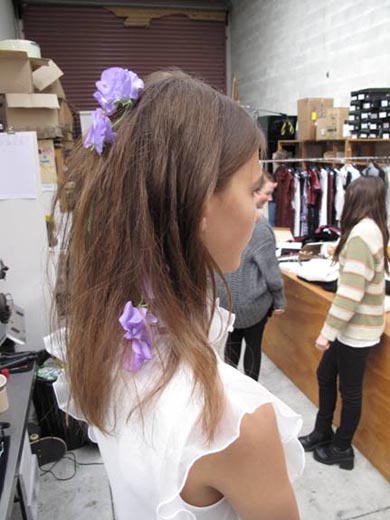 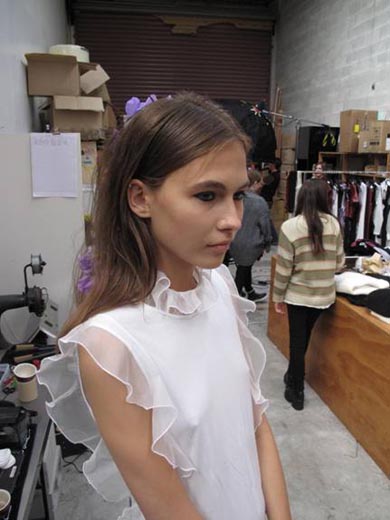 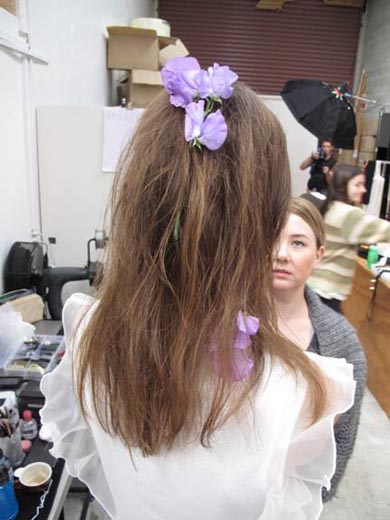 The theme for this show revolves around the aftermath of a great night out. Stolen Girlfriends’ designer Marc Moore has created a collection which features a lot of angelic, ﬂoaty, sheer layering contrasted with punky, gothic accessories such as studded chokers. This idea of contrasts follows through in the collection’s signature yardage print of cigarette butts and hydrangea ﬂowers. Low rent mixed with sweetness.
Show stylist Zara Mirkin called for hair-styling that was simple and clean looking from a frontal perspective owing to the complexity of the clothing and styling yet would also incorporate the contradictory thematical aspects evident elsewhere in the collection. It was therefore decided that the hair could have a different feel at the back of the head as though the model had slept on their party hair from the previous night. Accessories such as plastic cigarette butts and fresh ﬂowers were then to be placed randomly in the hair.
To begin the female look, the hair texture was loosely relaxed in a very natural manner with ﬂat-irons so that it did not look wavy or perfectly straight.
The hair is centre-parted and sectioned from a couple of inches back from the front hairline to behind the ears on either side of the head.
In small subsections, this hair was brushed ﬁrmly to the scalp with a bristle brush and then sprayed with KMS California Hair-Stay Medium Hold Hairspray on every section to ﬁx it close to the head and behind the ears. This frontal area was then sprayed with Silksheen Gloss Spray for extra contrast.
At the back of the head a square section about 3 in deep and the width of the head wide is taken below the crown. This area was texture set by light back-brushing and following this with ﬂat-irons in a very loose manner. This created a tizzy dissonance contrasting with the sleekness evident at the front of the look.
This was brushed out and KMS California Dry Wax was liberally sprayed into the hair and the hair was styled with the ﬁngers to simulate a pillow-rub effect.
To ﬁnish, various plastic cigarettes and fresh ﬂowers were individually attached in the hair to suit the model and to complete the look.
For the male look, any curl or wave texture was relaxed in the hair to match their female counterparts. The models with shorter length hair were styled very individually in a manner that reﬂected their own hairstyle and models with longer hair had this pulled back into a looped unﬁnished ponytail at the nape of the head with loose pieces pulled out from the top front hairline to loosen the look up. KMS California Dry Wax was sprayed on the top surface of the hair for texture to ﬁnish.

Murrell also worked on the hair at Huffer’s autumn–winter 2011 collection, Into the Unknown. 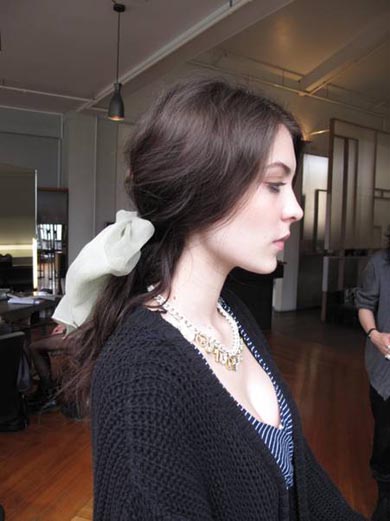 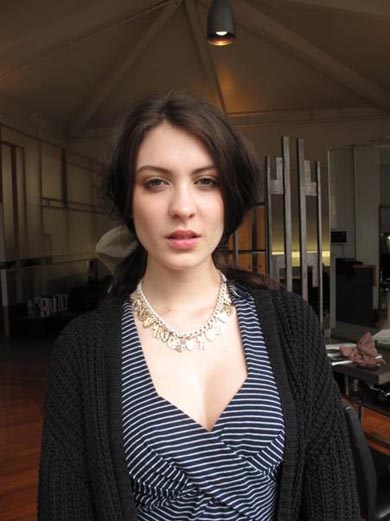 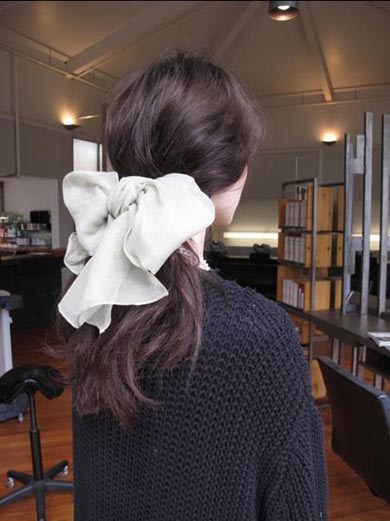 The feeling for this collection was inspired by American college fraternities and sororities. The women’s collection from Aimée MacFarlane features a colour palette of neutrals with splashes of detail such as knitted animal prints.
The brief from show stylist Rachael Churchward for the women’s hair was a simple, dishevelled look that animated the essence of the collection. A look that captured the freedom of fraternity life. The hair texture is straightened loosely but allowed to be ﬂyaway and afﬁxed at the nape with pins so as not to be as tightly controlled as a ponytail. Fabric bows are then attached at the nape to complete the look.
The men’s hair is either long, relaxed and loose or cut very short , strong and military-like. The men’s clothing features sorority-like patches to suggest that they look like a gang but there is also an element of English street culture about the clothing styling.
To begin, the hair is loosely relaxed with a ﬂat iron in such a manner that it does not take all of the movement out of the hair.
Next, pins are placed in vertically at the nape in a row of about 8 of them. This pulls the hair to the neck but doesn’t make it compress like a ponytail.
A fabric bow is pinned to the nape over the top of the previous pinning and the hair is sprayed liberally with KMS California Dry Wax for a ﬂexible, matt hold and pulled with the ends of the ﬁngers to loosen it and create a ﬂyaway texture.
KMS California Hair-Stay Medium Hold Hairspray will be used if needed for extra hold depending on weather conditions as the show is being held outdoors.
The men’s hair is styled to suit with KMS California Clay Creme for a Matt texture.

2 thoughts on “Hair at Stolen Girlfriends’ Club and Huffer: behind the scenes”