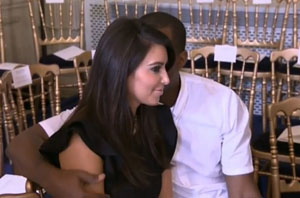 Kim Kardashian (with Kanye West in tow) and former Lucire cover girl (and, we should mention, hotel heiress) Nicky Hilton give their remarks in advance of the Valentino haute couture show at the Hôtel Salomon de Rothschild in Paris on Wednesday, in our video from ITN below.
Kardashian says this is her first Parisian fashion week, and that she is a fan of Valentino, which her mother had worn.
And unlike at the Stéphane Rolland show, ‘Kimye’ were on time.
Hilton happened to have been in London, and caught the Eurostar over to attend the event. Her mother, Kathy, joined her in the front row.
Also in the front row were actress Clémence Poésy, and Olivia Palermo with her boyfriend Johannes Huebl.
The full catwalk show is also shown below.