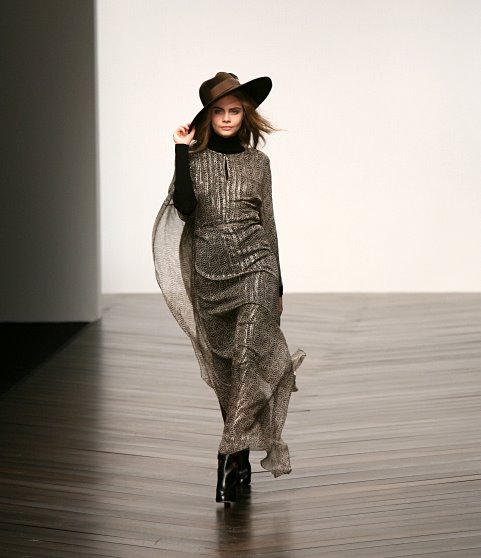 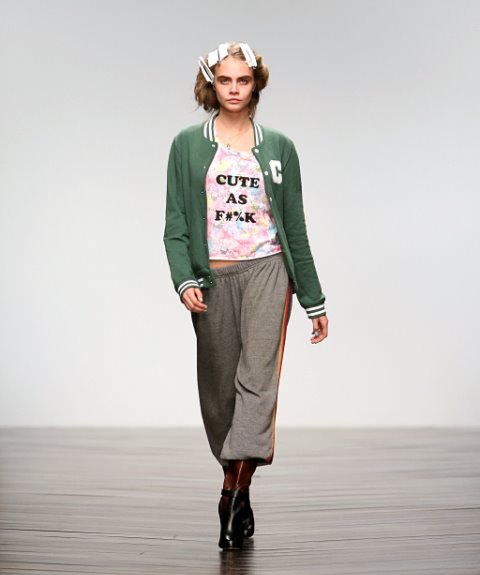 Above Issa had a Navajo theme for autumn–winter 2013–14, with Cara Delevingne opening the show.

From London Fashion Week’s autumn–winter 2013–14 catwalks in our latest update are Sass & Bide, Central St Martin’s, DAKS, Sister by Sibling, Christopher Raeburn, Clements Ribeiro, Palmer Harding, Orla Kiely, Jasper Conran, Marques Almeida, Julien Macdonald, Todd Lynn, Moschino Cheap & Chic, J. J. S. Lee, and Issa.
Completing our day one videos, Sass & Bide showed a lively collection with a monochrome base, but with metallics and yellows adding extra energy. The Central St Martin’s MA programme’s graduates were on-trend as usual, with Elish Macintosh being the name to watch from London.
DAKS advanced its traditional, well tailored look—with draping and layering used to good effect—with digital florals and metallics, all for what might be deemed a very “British” effect. Sister by Sibling, meanwhile, had Paula Yates as inspiration, with a suitably retro style, with cute berets, pencil skirts, and a fun use of wool. We also noted oversized prints and chunky knits.
Christopher Raeburn went nautical with the Maunsell Sea Forts as his inspiration, with blues and stripes signalling his theme, as well as wool coats with a vertical emphasis and bomber jackets. The collection remains environmentally friendly, which is just what Lucire likes to see.
The husband-and-wife team of Suzanne Clements and Inacio Ribeiro used florals, oversized prints and tile patterns to good effect, bringing a fresher take to winter, with dropped waistlines showing the tiles to maximum effect. Their autumn–winter 2013–14 was bold, and one we’re looking forward to.
Orla Kiely had a delicate, 1960s vibe with a presentation featuring secretaries working at their desks, with short coats, pencil skirts, cardigans, fitted dresses and minis, while cute prints, mustard, pink and red offset the black and grey base shades.
Jasper Conran, too, went back to the 1960s, with an orange catwalk, and looks inspired by Mia Farrow. Shift dresses, panelled skirts, stacked heels and leather pumps featured, while colour-wise, there was plenty of orange to match the catwalk, as well as yellow and magenta for a very bright, uplifting autumn–winter.
Marta Marques and Paulo Almeida excelled with denim once again, ripped and rough but remaining chic, while the trousers were baggy and dragged on the floor, paired with ponyskin biker jackets.
Julien Macdonald returned with a bang, with Las Vegas as his theme, and plenty of metallics, embellishments, mesh and mini-dresses for a dose of decadent impact. Macdonald’s rock chick is going to have fun this winter, showing a bit of skin while she’s at it.
Todd Lynn also looked to America for inspiration, but this was a pre-World War I source, namely the Gopher Gang, ‘a New York tribe who would jump people for their clothes then send them to a seamstress for alterations’. The result was classy despite the theme suggesting roughness: Lynn instead played with volumes (oversized sleeves), layering and deconstruction (the slashing of fabrics, but in all the right places), but kept the styles wearable.
Moschino Cheap & Chic’s punk girl stuck with black but with studs, prints featuring oversized script, fur and animal prints as contrast. J. J. S. Lee kept with her minimalist theme, with lighter shades and a sense of retrofuturism, one trend we keep forecasting as making a comeback in 2013—so we’re calling Lee particularly on-trend. High collars, asymmetric jackets and tasteful coats that go down toward the knee, with black, white, pink and powder blue keeping autumn–winter light.
Photographer Doug Rimington, shooting for Lucire’s print and tablet editions, noted on his Facebook that Cara Delevingne had just scooted by—as she went in to Issa and opened the show. The collection featured wide-brimmed fedoras, maxi-dresses and kaftans, with inspiration from the Navajo Americans. 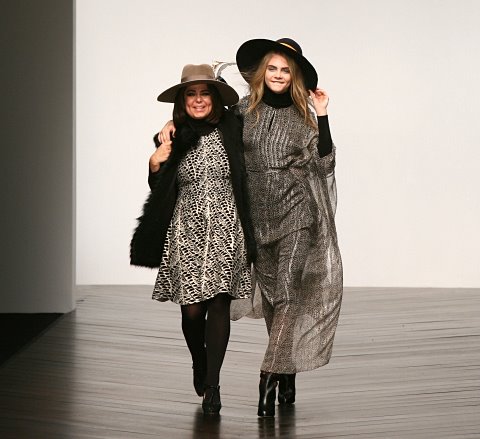