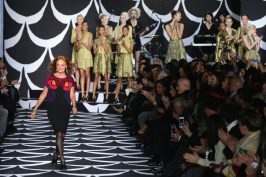 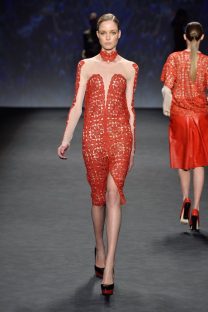 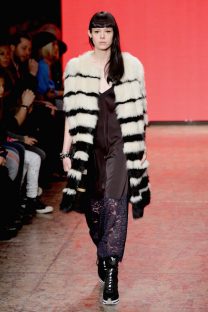 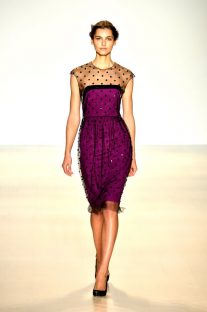 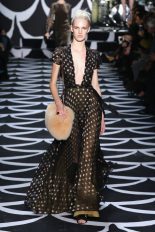 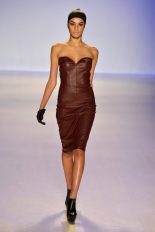 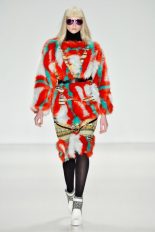 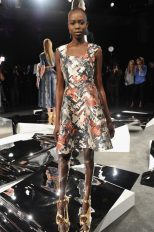 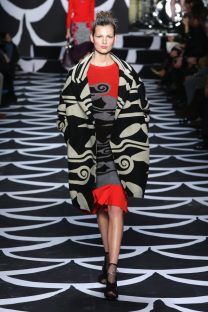 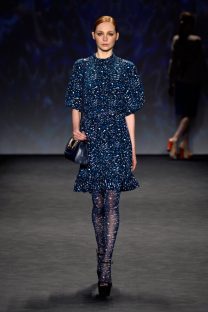 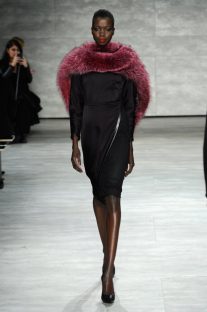 After day four at the New York Fashion Week fall–winter 2014–15 collections, we have videos from David Tlale, Katya Zol, Lela Rose, Custo Barcelona, Parkchoonmoo, Georgine, Vivienne Tam, DKNY and Meskita. Today (day five), we’ll follow Mathieu Mirano, Caroline Herrera, Noon by Noor, Angel Sanchez, Dennis Basso, Milly by Michelle Smith, Katya Leonovichii and Reem Acra, which you can catch on our live player beginning at 9 a.m. EST.
This was the day of brighter colours and more upbeat moods, if days one through three were about black and grey. Then again, this was also the day of Custo Barcelona, whose shows—ever since we began covering them for the fall 1999 season—have been happy affairs, along with Betsey Johnson’s. In Custo’s case, it has been Custo Dalmau’s willingness to inject colour and vibrancy into each collection without proceedings becoming stale, and fall 2014 is no exception. There were more furs and layering returned in a big way, which points to greater volumes coming into play for the season.
But Lela Rose and Meskita were happy to depart from black, too, with gold, magenta and silks for the former, and Alessandra Meskita went away from earthy tones for more royal blues, burgundies, pinks and icy whites. Katya Zol also made good use of icy shades, as well as some seemingly comfortable leather trousers, while her models had a single line of gold down the centre of their faces. Parkchoonmoo was all about boldness, enjoyable geometric prints and glitter—and did so in refined fashion. Prints were also the order of the day at Czar by Cesar Galindo. Georgine went for luxury, with furs and silks, along with a helping of prints; and South African-born David Tlale, too, delivered elegant, refined and flowing looks with silk and gold ornamentation lifting his designs further.
Vivienne Tam, meanwhile, derived her digital print design from inspiration from cave murals in Dunhuang, China. The prints were exquisite and detailed, and Tam managed to bring elements of her Chinese culture into the collection in a way that has cross-cultural appeal.
The colour accolade, however, falls not with Custo on day four, surprisingly, but Diane von Fürstenberg, with reds and cobalt blues lifting black and gold geometric prints as the designer also celebrated the 40th anniversary of her wrap dress. Her collection, cheekily entitled Bohemian Wrapsody, is about ‘A glamorous vagabond, she is on the run with her dreams and color.’ And that’s definitely, in the words of our Anna Deans, a wrap.