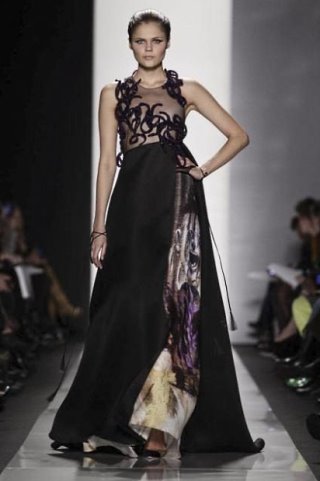 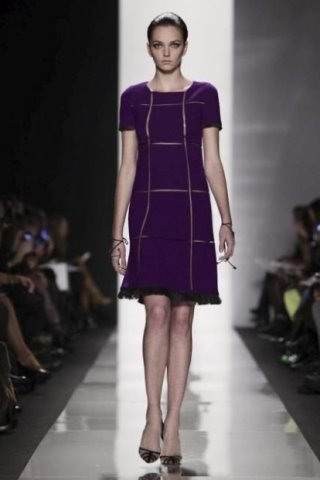 Above Sophisticated and well thought-out, this season had to be one of our favourite collections from Ralph Rucci.

If you missed them when they were streaming live, more edited videos from Mercedes-Benz Fashion Week New York’s fall 2013 collections are now in—namely the remainder of day four: Vivienne Tam, Lela Rose, Nina Skarra, David Tlale, Ralph Rucci, Diane von Fürstenberg and Emerson. Plus the first of the day five ones have been filed: ICB by Prabal Gurung is at the end of our collection of videos.
For those following our Twitter account, you would have know when Vivienne Tam was showing, with a collection celebrating the lunar New Year—a nod to Tam’s ethnic roots—but she kept enough mainstream appeal for her US buyers. There was plenty of auspicious red on the set, and on the clothes themselves, with black, white and blue as accents and contrasts. Tam played on the Mao military theme, as well as Chinese ideographs, but one of her fun prints featured President Obama, wearing sunglasses, a reference to modern pop culture. Tam insists the move was not political, and only reflected what was going on in the world.
Lela Rose, meanwhile, referenced the Brothers Grimm for her collection, one that was girly and feminine and delighting in its details. Think flowing, light organza for evening, and textured jacquard and wool for day, as you go down to the woods. Norwegian designer Nina Skarra’s autumn–winter 2013–14 woman is more flirty, and she kept within a narrow colour palette, largely of red, white and black.
David Tlale, who, like Skarra, opted for a presentation, showed a strong but elegant vision for autumn: sharp shoulders and well tailored coats contrasted with tulle and golden hues—with the odd dash of red.
Ralph Rucci gave us another sophisticated season, though with a simpler, more relaxed approach. He used colour to surprise and delight, especially with bright mink coats (purple was the colour that jumped out for us), and we were impressed with his use of leather, cashmere and silk. Overall, Rucci was happy to have a more nuanced look, with simpler silhouettes, and left us to appreciate the detailing, surfacing, and accessories—including transparent PVC boots. This was a ten out of ten from Mr Rucci, with one of our favourite collections from him to date.
Diane von Fürstenberg took us back to the 1970s—specifically Studio 54. For von Fürstenberg, who frequented the club, it is about drawing on her own first-hand memories, mixed in with her own inspiration, a trip to the Rock and Roll Hall of Fame in Cleveland, and David Bowie. Dubbed Glam Rock, with disco music accompanying the models, we saw wrap dresses, plenty of metallic (copper and gold) lamé, maxi dresses, jumpsuits, and animal prints.
Finally, to round off our day four videos, Jackie Fraser-Swan, the designer of Emerson, showed an extremely tasteful fall collection, with a good use of wool and leather, in shades of burgundy, mustard, grey and black.