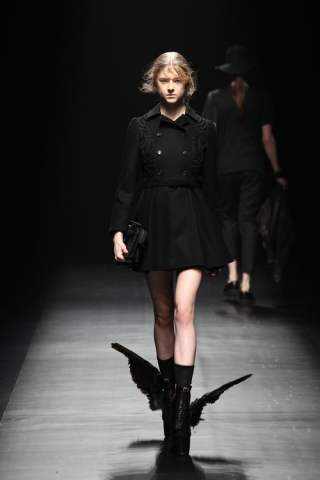 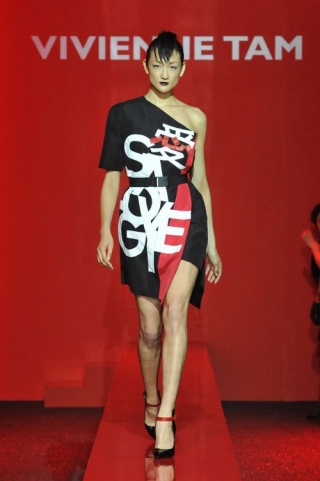 Mercedes-Benz Fashion Week Tokyo wrapped up Sunday as cherry blossoms bloom in Japan’s capital. Over the last couple of seasons, Tokyo Fashion Week kept its target on European and Japanese buyers and audiences, but this season, it has eyed the growing Asian market, especially China. It makes sense since Chinese consumers have now become the world’s leading buyers of luxury goods.
Japanese fashion brand Christian Dada was the fashion week opener for the autumn–winter 2013–14 collections. Christian Dada’s designer, Masanori Morikawa, is known as a stage costume designer for the American pop singer Lady Gaga during her Born This Way Ball 2012 tour. Morikawa has been showcasing his signature style with a rebellious yet silent dark beauty, but this season he got inspiration from a Chinese mythological bird called the fenghuang (phoenix), which is the theme of his collection. Leather jackets and pants are mainly in black and white with blue, red and gold patterns representing the fenghuang. The most memorable moment of Morikawa’s show was definitely his signature tall boots with bird wings.
Chinese-born designer Vivienne Tam held a special runway show during Tokyo Fashion Week to celebrate the 15th anniversary of her brand in Japan. Tam presented the same collection she first showed at New York Fashion Week for the lunar New Year. Chinese calligraphy added unexpected twists in her latest collection in a modern and punk-like way, which successfully engaged with the fashion-savvy Japanese audience.
Johan Ku, a Taiwanese designer, presented his signature knit collection. This season, Ku revealed the sexiness of a woman’s silhouette, with the theme of Anna, the female lead in the 1992 movie Damage. Unlike his last several collections, this season was full of pieces that showed off plenty of skin using holes, fringes, and asymmetric necklines. They all look randomly placed but are well calculated, demonstrating Ku’s skill of knit-work, boosted since his last collection.
Japanese veteran designer Hiroko Koshino was one of the highlighted designers at Tokyo Fashion Week, presenting her collection on the last day. She also eyed the growing Asian market as she presented her new “east meets west” look. In her collection, Floral Memories, it was not just flower-patterned dresses that walked down the runway. Her floral inspiration was everywhere: from texture of fabric, colour choice and make-up, to draping and rounded silhouettes on each of her looks. The natural phenomena of flowers were represented in an artistic form, rather than the romantic image which many designers use.
Since the Great East Japan Earthquake, Japan has been investing a full effort to shift its gear towards marketing its brand outside the country, especially to the growing Asian market. There are still criticisms that Tokyo Fashion Week is marketing internally, while the fashion-savvy audience in Japan is interested in street fashion, which they call ‘real clothes’, as opposed to high fashion from the runway. Tokyo Fashion Week continues to tackle those challenges, and the next several seasons will be key to turning things around, to become a new trend-setting global destination.—Yuka Murai, YM Biz & Media 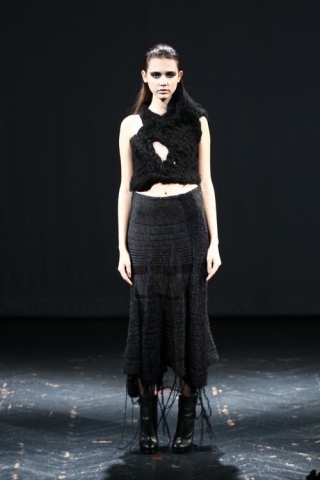 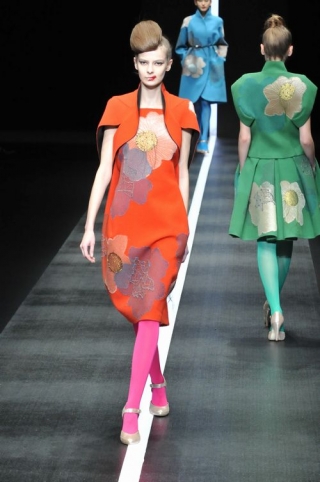 Yuka Murai of YM Biz & Media is a correspondent for Lucire.