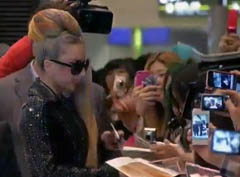 Lady Gaga has arrived at Narita Airport in Japan for her Born This Way Ball tour, delighting fans by stopping to pose with and signing autographs for them.
Gaga appeared with multi-coloured hair and a long black leather dress.
She has three performances at the Saitama Super Arena on May 10, 12 and 13, before she heads to Taipei next week.
Gaga had kicked off her tour on April 27 and has already visited Hong Kong and Korea as part of her tour. Taiwan, Indonesia, Australia, Singapore and New Zealand are still on the agenda.
Some of the crowd had waited hours to catch a glimpse of the American singer.