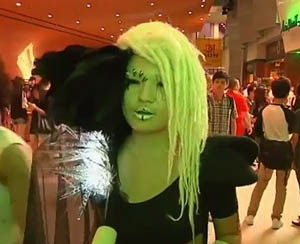 Lady Gaga, who has four shows in Hong Kong as part of her Born This Way Ball tour, was the subject of a lookalike contest in the Chinese city.
Pink Kwok, 23, a film student, made her own outfit and won the competition.
Kwok said she admired Gaga for working hard for her fans, as well has her approach to performance, make-up and fashion.
The first show was performed Wednesday night at the AsiaWorld Expo, with subsequent shows scheduled for Thursday, Saturday and Monday. Most media have reported the seats have all been sold, though the venue continues to say that there are a few from the side, and others with a restricted view, that were still available through www.hkticketing.com or on 852 31-288-288.