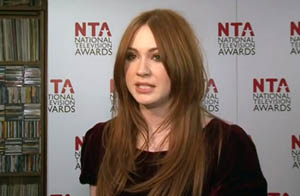 In entertainment news, Zac Efron has arrived in London to promote his new film, The Lucky One. On the red carpet, Efron talked romance, saying that ‘the one’ is still out there and he hasn’t met her yet, and gave some tips on what he considered to be romantic gestures in the dating world.
In South Korea, Lady Gaga arrived at Gimpo Airport in Seoul for her latest concert to be held on Friday at the city’s Olympic stadium. The star looked relatively understated for her latest arrival, in a low-cut white dress and a pearl-encrusted mask.
Gaga took time to sign autographs and have photos taken with fans while at the airport.
This is the beginning of her third tour, dubbed The Born This Way Ball. She will also visit Hong Kong, Japan, Taiwan, the Philippines, Thailand, Singapore, Indonesia, New Zealand and Australia, before heading to Europe.
On British television, meanwhile, Karen Gillan and Arthur Darvill have filmed their final scenes for Doctor Who in a graveyard. How their Amy Pond and Rory Williams characters depart the series is unclear, with the storyline kept secret.
Kelly Rowland has not confirmed whether she will returned to The X Factor, with the rumour mill saying that she is holding out for more money.