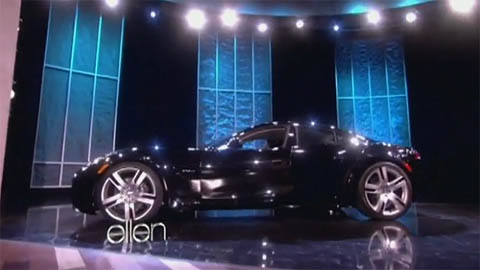 Lady Gaga is giving back with the Born This Way Foundation.
The new foundation, set up by Gaga and her mother Cynthia Germanotta, was launched at an event hosted by Oprah Winfrey at the Sanders Theater at Harvard University.
The star has put up US$1·2 million of her own money to get it going.
The Foundation’s aim is to create a safer and more accepting community for young people, so they can realize their dreams and build a better world.
After Winfrey’s interview with Gaga, a panel supporting the Foundation was introduced, consisting of David Burtka, Deepak Chopra, Prof Charles Ogletree, Alyssa Rodemeyer, Sec. Kathleen Sebelius, and Dr Susan Swearer.
Singer Justin Bieber was presented a US$100,000 Fisker Karma electric car for his 18th birthday by his manager, Scooter Braun, on the Ellen show, where he performed. The car was a gift from Braun and Bieber’s mentor, Usher.
If the rumours are true, then Tom Cruise is in talks for Top Gun 2. Paramount Studios has reportedly hired a screenwriter for the project already, on the eve of a re-release of the original ﬁlm in 3-D.
The iconic 1980s hit made Cruise a star and its lines are often quoted by fans.
Simon Pegg, meanwhile, is lending his voice to a character in an animated version of Star Wars: the Clone Wars. Pegg plays Dengar, a bounty hunter.
All four Indiana Jones movies are being released on Blu-ray, with plenty of extras and ‘a few new surprises,’ according to the report. Readers can put in an advance order through this Amazon link in the US.
Funeral home owner Carolyn Whigham, meanwhile, denies she or any of her staff leaked the photo of Whitney Houston in her cofﬁn—an image that wound up going viral.