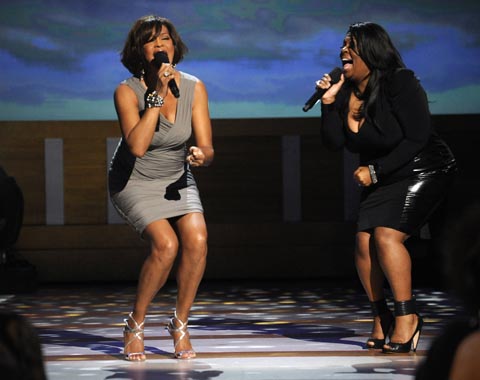 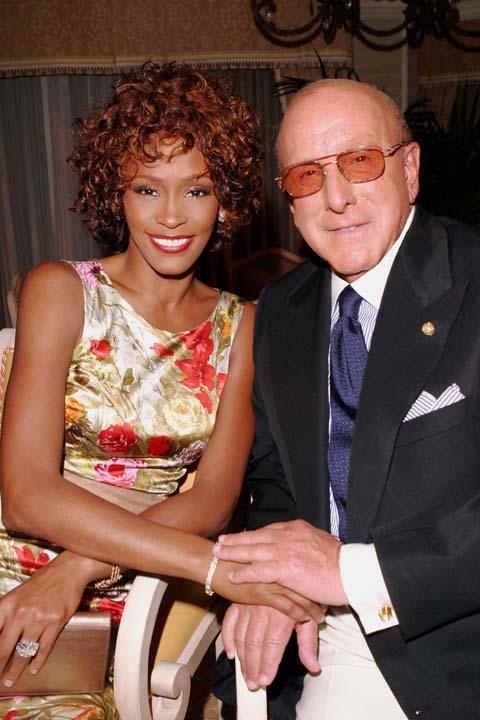 Top Whitney Houston (left) pictured with Kim Burrell, performing on the 11th Annual Celebration of Gospel in 2011. Above Whitney Houston with music mogel Clive Davis, whose party she had been expected to attend this weekend.

Reports from Whitney Houston’s publicist, Kristen Foster, are emerging, stating that the singer has died at age 48. The cause of death is presently unknown.
She was pronounced dead in her hotel room on the fourth ﬂoor of the Beverly Hilton at 3.55 p.m. PST, said Lt Mark Rosen of the Beverly Hills police. There were no signs of criminal intent, according to Rosen.
Police had received an emergency call from the hotel at 3.43 p.m. PST about Houston. Paramedics who were already on site due to an earlier party had tried unsuccessfully to revive the singer.
Houston was one of the world’s best selling singers in the 1980s, and managed to translate her fame into a movie career, with The Bodyguard, Waiting to Exhale and The Preacher’s Wife in the 1990s.
Later in life, however, she admitted to drug abuse, including the use of cocaine and pills, and had ﬁnancial problems.
Houston was already well connected from the start, being a cousin of Dionne Warwick and the goddaughter of Aretha Franklin. As a teenager, she sang back-up for Chaka Khan and Jermaine Jackson and was a fashion model.
Her ﬁrst album, Whitney Houston, in 1985, brought her to national attention, and she won her ﬁrst Grammy for ‘Saving All My Love for You’. Her 1987 album, Whitney, included the songs ‘Where Do Broken Hearts Go?’ and ‘I Wanna Dance with Somebody’.
She married soul artist Bobby Brown in 1992, and divorced him in 2007. The tumultous marriage saw a charge of domestic abuse against Brown in 1993. By the mid-1990s, Houston was regularly using drugs, a habit which she blames on Brown.
She and Brown had one daughter, Bobbi Kristina.
Her most recent appearance was at a pre-Grammy party on Friday night, where the star did not look particularly well.
She had expected to attend a pre-Grammy party hosted by her mentor, Clive Davis, this weekend. Davis said at the function, which was held Saturday night, ‘Whitney was a beautiful person and a talent beyond compare. She graced this stage with her regal presence and gave so many memorable performances here over the years. Simply put, Whitney would have wanted the music to go on and her family asked that we carry on.’
Aretha Franklin paid tribute to Houston on her Facebook page, stating, ‘I just can’t talk about it now. It’s so stunning and unbelievable. I couldn’t believe what I was reading coming across the TV screen. My heart goes out to Cissy, her daughter Bobbi Kris, her family and Bobby.’
Mariah Carey stated on Twitter, ‘Heartbroken and in tears over the shocking death of my friend, the incomparable Ms. Whitney Houston. She will never be forgotten as one of the greatest voices to ever grace the earth.’
Sir Elton John said on stage at his Las Vegas show, ‘This is a sad day today, all I want to talk about is her music. She was the most beautiful woman I think I ever saw. Thank you for giving us your talent, and one of the most beautiful voices I’ve ever heard.’
Sir Elton dedicated a performance of ‘Don’t Let the Sun Go Down on Me’ to Houston.