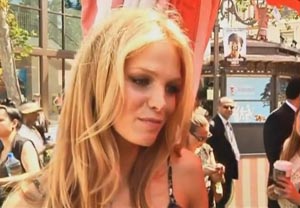 Victoria’s Secret’s Angels—Miranda Kerr, Alessandra Ambrosio, Adriana Lima, Erin Heatherton and Candace Swanepoel—unveiled their What Is Sexy? list in Los Angeles Thursday.
The quintet wore mini-dresses at the Grove shopping centre as they kicked off their Bombshell summer tour, which will see them in various cities across the US and Canada.
They voted Emma Stone their sexiest actress; Julianne Hough of Dancing with the Stars US has the sexiest legs; Beyoncé Knowles has the sexiest summer style; Dianna Agron of Glee the sexiest smile; Mila Kunis the sexiest eyes; Amanda Seyfried the sexiest lips; Soﬁa Vergara of Modern Family the sexiest curves; and Jessica Lowndes of 90210 has the ‘sexiest sun-kissed glow’.
The others on the sixth annual list are:

Facebook fans chose Jennifer Lawrence as their sexiest up-and-coming bombshell, and Ashley Greene was named as the sexiest Tweeter.