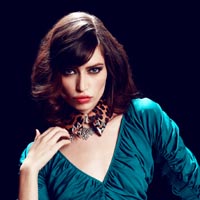 Now that the Festival de Cannes is ﬁnished for another year, there is a small backlog of features that we’d like to share. Today, on the main part of the Lucire website, Lola Saab interviews Christine Rhee and Linh Thi Do, who have created their new accessories’ label, Eleven Objects. Eleven Objects makes very fashionable collars, starting off small—but with dreams to get bigger.
In earlier articles that RSS readers might have missed: Stanley Moss visits the Hôtel Marais Bastille in Paris, while guest contributor Anita Talbert heads to Toscana and samples the Borgo Santo Pietro.
Lola also has stories on Oscar de la Renta and jewellery designer Lorenz Bäumer, as part of the New York Alliance Française’s Fashion Talks series. We’re thrilled to write about the return of Sarah Riley. And as part of her South African tour, Elyse Glickman gives our fashion section a very international feel covering Design Indaba.
Fashion editor Sopheak Seng has his picks for winter 2011 dresses in New Zealand, and for men’s winter beauty.
Social network Elysiants had its big party in Santiago, and our former photographer Benoît Poirier d’Ambreville connects us to the scene, in an article written by Vicki Matias. And Lola was at Carnegie Hall as it celebrated its 125th anniversary.
Elyse Glickman looks at the sexism in crying: ‘When a woman cries in public, even against her best intentions to remain cool under pressure, it unleashes negative stereotypes—even in 2011. However, when powerful men such as House Speaker John Boehner, Glenn Beck and championship-winning athletes unleash the waterworks, it makes news.’
Of course, you needn’t miss any more articles should you join up on our Facebook page, or our Facebook group—we notify readers on both services about our latest. (Sometimes, Google News will miss them accidentally.) Just to tempt you to the former a bit more, we are giving away a BlackBerry Bold 9700 if you “like” the page today and be around when we make the draw later in the year.* Even if you don’t join, we’ll continue to keep you updated—but we expect a NZ$1,199 BlackBerry to be a tempting prize.
Finally, just to mark what’s in the Zeitgeist: it appears the underground in Bruxelles, government-owned, is playing Lady Gaga through its sound system. And not every passenger likes it, it appears. However, 2011 is the year Gaga has truly mainstreamed.

* Open to Australian and New Zealand residents only. We have another draw for international readers.

One thought on “Lucire updates: emerging talent, a new social network, and Lady Gaga on the Bruxelles subway”