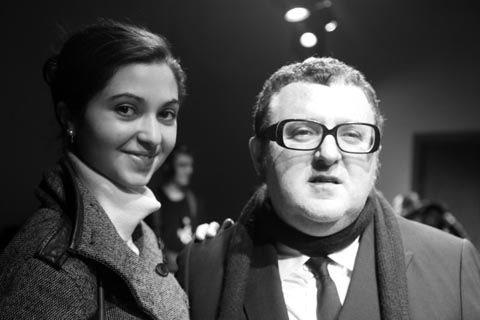 If you’ve surfed through to our home page, you’ll have noticed that Lola Saab has interviewed Alber Elbaz, getting him to reveal his thinking behind Lanvin’s menswear collection for autumn–winter 2011–12.
It’s not the only new article that we want to alert our RSS readers to.
In recent weeks, Lola has attended a series of fashion talks at the Alliance Française in New York City while she visits Stateside. Our coverage began with an interview with curator Pamela Golbin of the Musée de la Mode et du Textile at the Louvre, with American designer Tory Burch as our next subject.
Fashion editor Sopheak Seng has made his picks for autumn–winter 2011 menswear Down Under, and skin care products for the winter while wearing his beauty hat. (And if you want more advice, Dr Paul Friedman’s Beautiful Skin Revealed is up for grabs for our US readers, just by becoming a Lucire Facebook fan.)
Leyla Messian checks out the 2011 Oscar suites in Hollywood, at which there were numerous A-list celebrities. But that doesn’t faze her, as you’ll read.
Online today is our report from US west coast editor Elyse Glickman on her journey to South Africa, where she took in not only some of the wildlife, but gained a greater appreciation of the nation’s struggles, and checked out the lively food and fashion scenes.
And, don’t forget that you can be in the audience for Miss Universe New Zealand 2011 at the Amora Hotel Wellington—with proceeds from the charity auction going to the New Zealand Red Cross (it’s been approved by the Red Cross) to help with the aftermath of the Christchurch earthquake. Tickets can be ordered through this website.
As we’ve had no responses to our earlier query about whether we should change our feeds to a summary format, we will likely go ahead with it early next week. We trust readers will understand the reasons behind restricting the content in the feed.