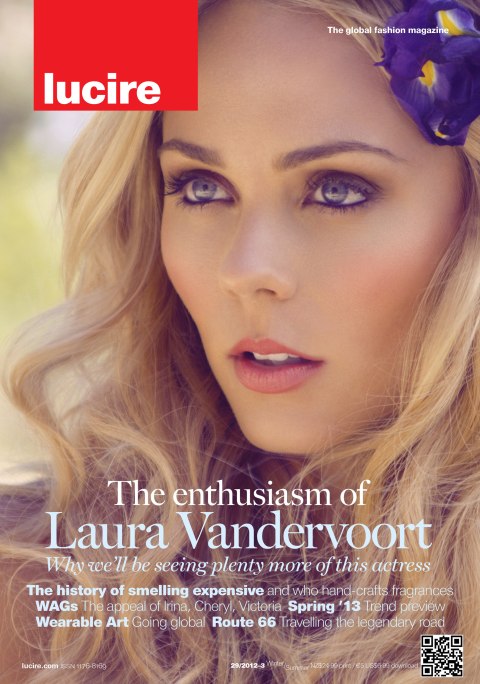 It was uncharacteristically quiet in the news pages in Lucire on Monday, for a very good reason: the release of issue 29 in print and PDF.
The latest issue features Laura Vandervoort (Smallville, V, Ted) on the cover, photographed by Courtney Dailey, styled by Lei Phillips, with make-up by Jamie Dorman and hair by Shaina Schow. And if you’re following us on Twitter, you will have seen the buzz this cover decision has generated, with Vandervoort herself telling her fans about it.
Other stories in this issue include Sarah MacKenzie’s examination on the power of WAGs (everyone from Irina Shayk to Cheryl Cole) in the fashion world, Jack Yan’s report on the Brancott Estate World of Wearable Art’s 2012 show, the history of perfumes as Geneviève Hole visits the International Fragrance Museum in Grasse—plus the most exclusive, trendy scents on offer. David Machowski travels Route 66, Tiffany Fernando looks at the spring–summer 2013 trends, and Sopheak Seng interviews the ladies from Surface Too Deep. Plus there are outstanding shoots from John Sayer-White, Amanda Bruns, Dirk Bader, Dorit Thies, Louise Hatton, and TJ Manou. You can have a look at the full table of contents, as well as some preview spreads, here.
The print edition is available now on demand from Vertia, which you can order via our site here. Scopalto has also put the PDF on sale, via its website. Our Ipad and Android apps will be out later this week via Magzter—we’re waiting for Apple to approve the Ipad one as a routine matter. Watch this space, or join up to our Facebook page to find out when it’s ready.