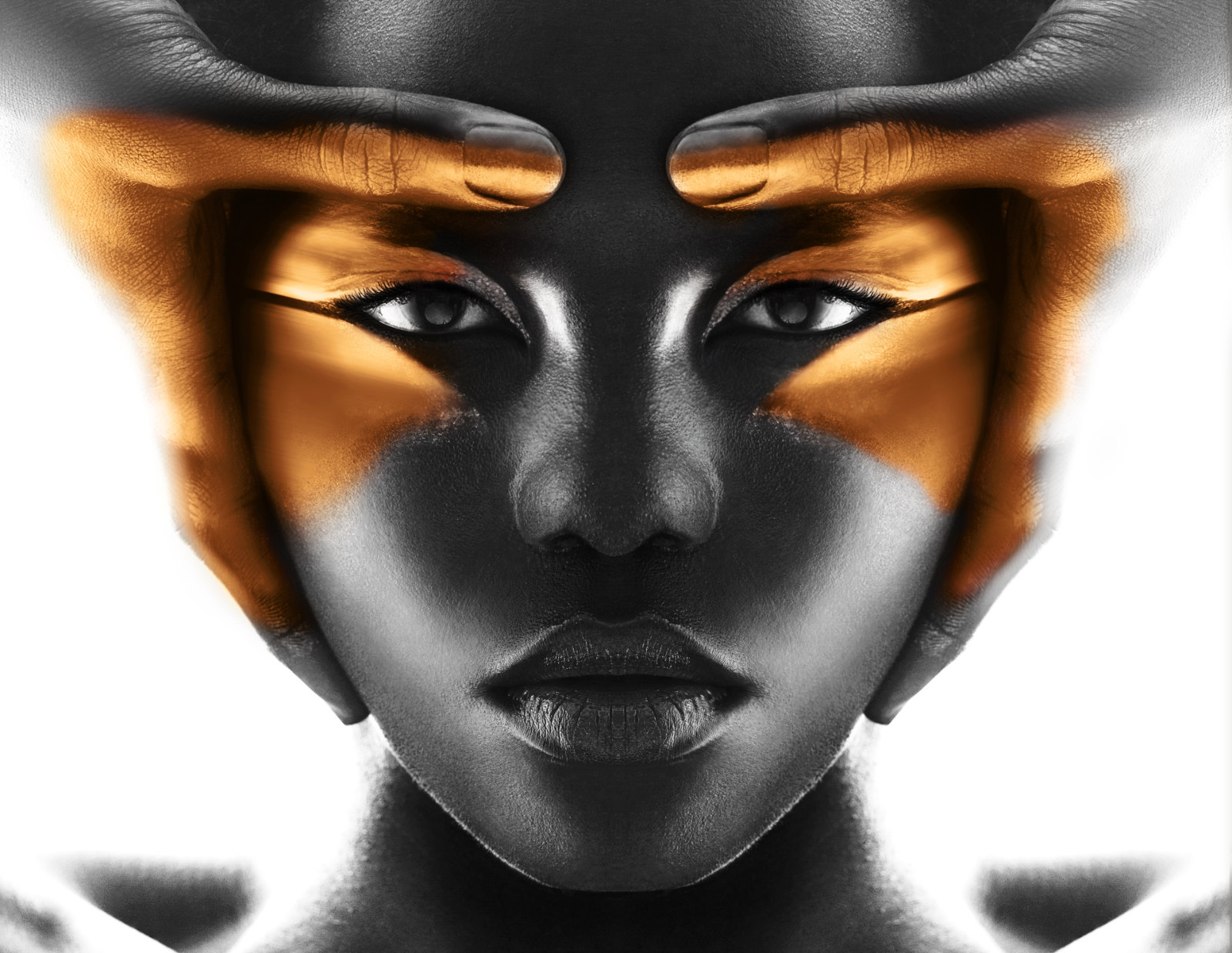 With our 25th anniversary, I’ve been wanting to look back through some of our shoots. Originally I had the idea of looking back at our favourite photographers, but that proved impossible, as there are so many styles and approaches that we can’t fairly rank one above another. In the overwhelming majority of cases, we’ve loved working with them all.

A safer bet is to look at some favourite covers from Lucire’s print editions. So much has to come together on these: great photography, but also great design and art direction, as well as having a cover that represents a strong issue within. Then at least some of the responsibility falls back on us here.

We begin this look back with the October 2006 issue in New Zealand, with former Miss World New Zealand and then-MTV host Amber Peebles. John F. Cooper was behind the lens, Daniela Shappee did the make-up, and Riad Azar the hair. 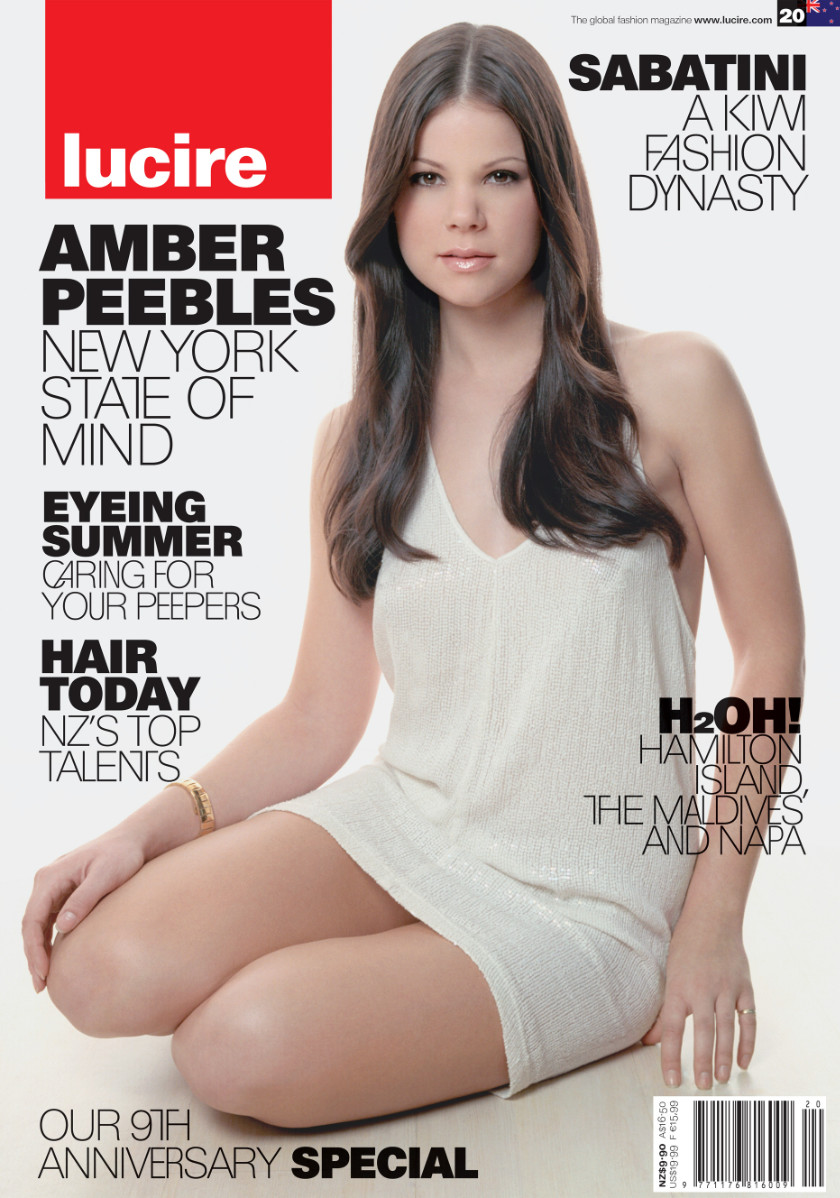 This was the first issue we did after we facelifted the design template. It didn’t go down well with people initially, and I’ve a feeling we were slightly ahead of our time. However, looking at it now, the high contrast between light and heavy type date this look as a product of its era.

Nevertheless, I’m proud of how this came together and John organized a heck of a lot behind the scenes. There was a real feeling of optimism with this issue.

When Amber and I first met in the early 2000s I said I could see her in New York City; but I never thought that on that first trip she would wind up being one of our cover models! 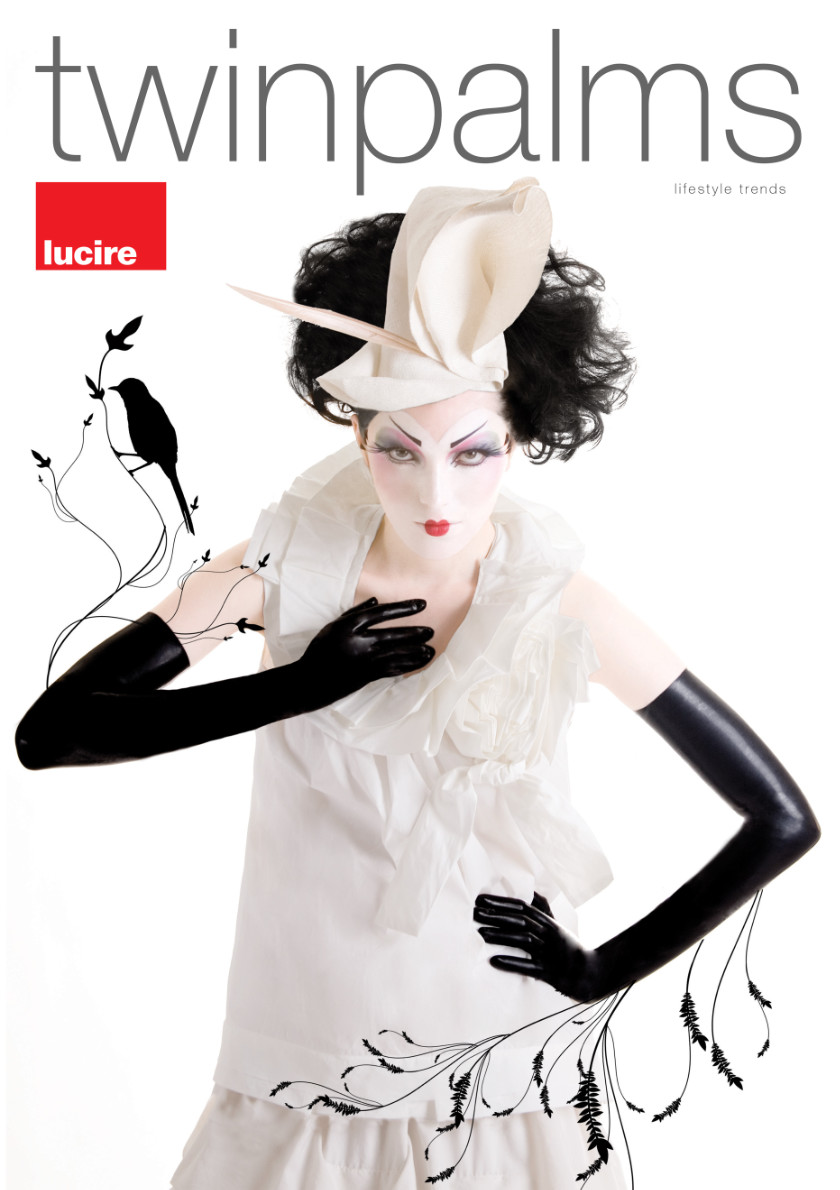 January 2008 and it’s the first issue of Twinpalms Lucire in Thailand, art-directed by Miguel Kirjon. Richard Reinsdorf’s cover photo was the perfect image to kick off our collaboration in Phuket. A series of very strong covers followed, and Miguel deserves full credit for them. This one is special because, if I recall correctly, I was the one who put forth Richard’s shoot as a potential cover. Happily, Miguel agreed with my choice. The shoot itself had hitherto appeared in the April 2007 issue of Lucire.

Raphael Mendonca styled this shoot, with hair by Riad Azar, make-up by Sylwia Rakowska, illustrations by Fabio Costa, and modelled by Tanya Pilyukova. 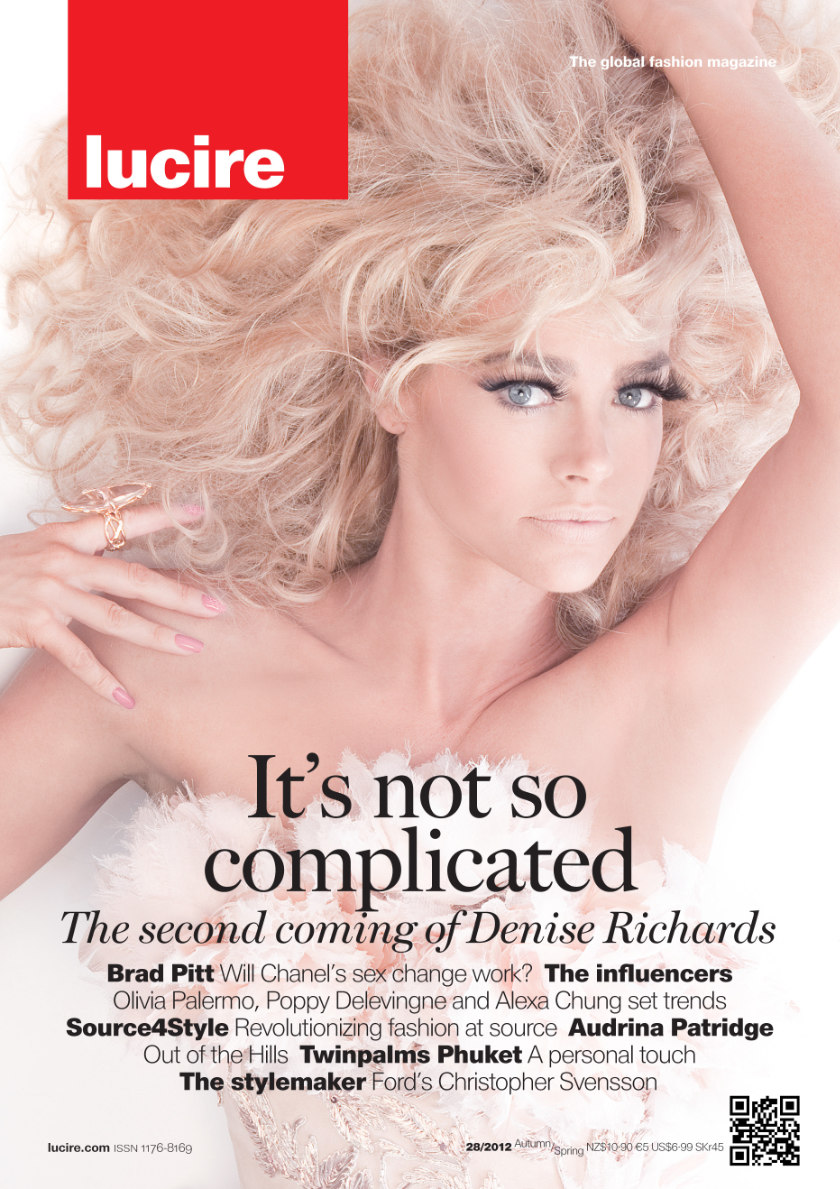 In August 2012, issue 28 marked the first print issue that fashion and beauty editor Sopheak Seng and I worked on, and it was thanks to Vertia that we returned in a more reasonable A4 format instead of the oversized 235 by 335 mm size. (We had originally envisaged an A4 back in the early 2000s.) We revamped everything about the magazine and made it more contemporary. We also followed some of the ideas that Miguel had over at Twinpalms Lucire by having more of a features’ focus. 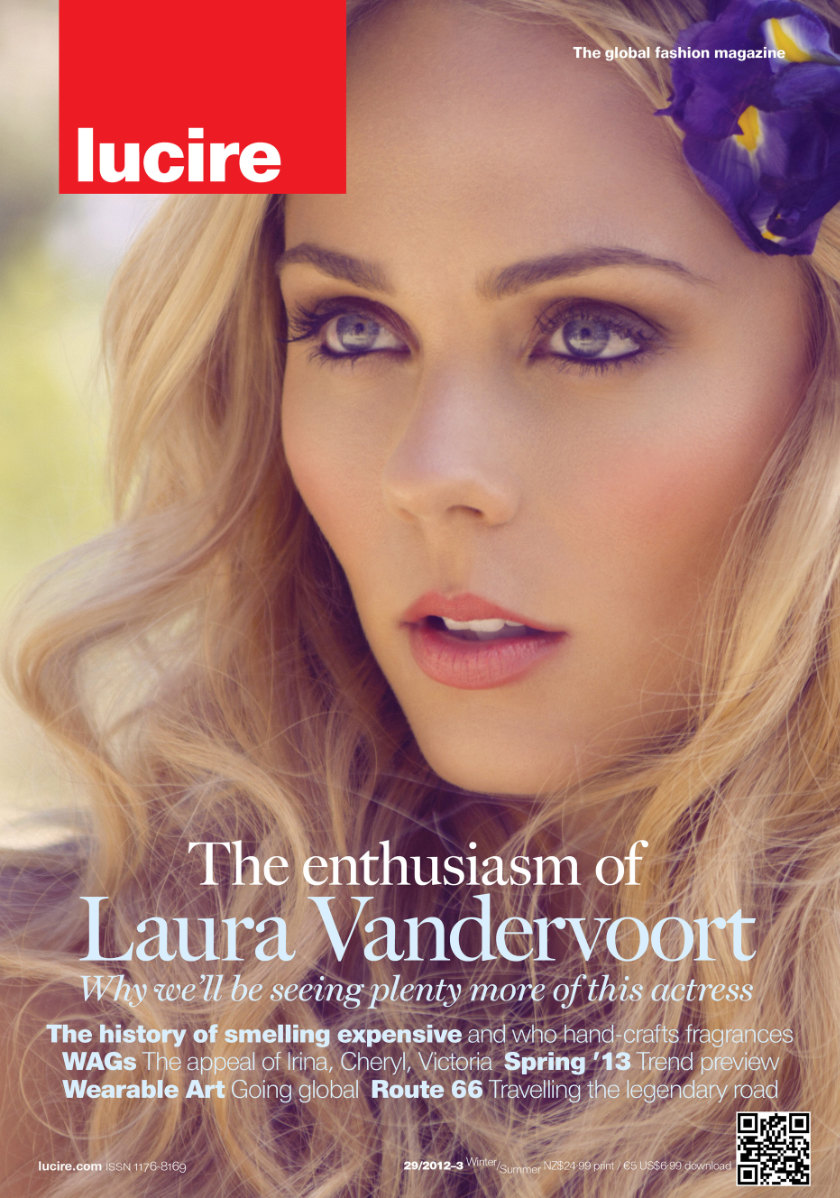 The following issue a few months later featured Laura Vandervoort on the cover, and I’ll always remember this one. Photographer Courtney Dailey shot a number of potential covers but the real gem was in a landscape shot. I thought she captured Laura perfectly, and luckily for us, she shot it at such a high resolution that we could crop a part of it to get this cover. I don’t think she expected us to use the image this way, but it remains one of my favourites in this format.

Jamie Dorman did the make-up, Shaina Schow the hair, and Lei Phillips the styling.

This issue won a Pride in Print award in 2012 in New Zealand. 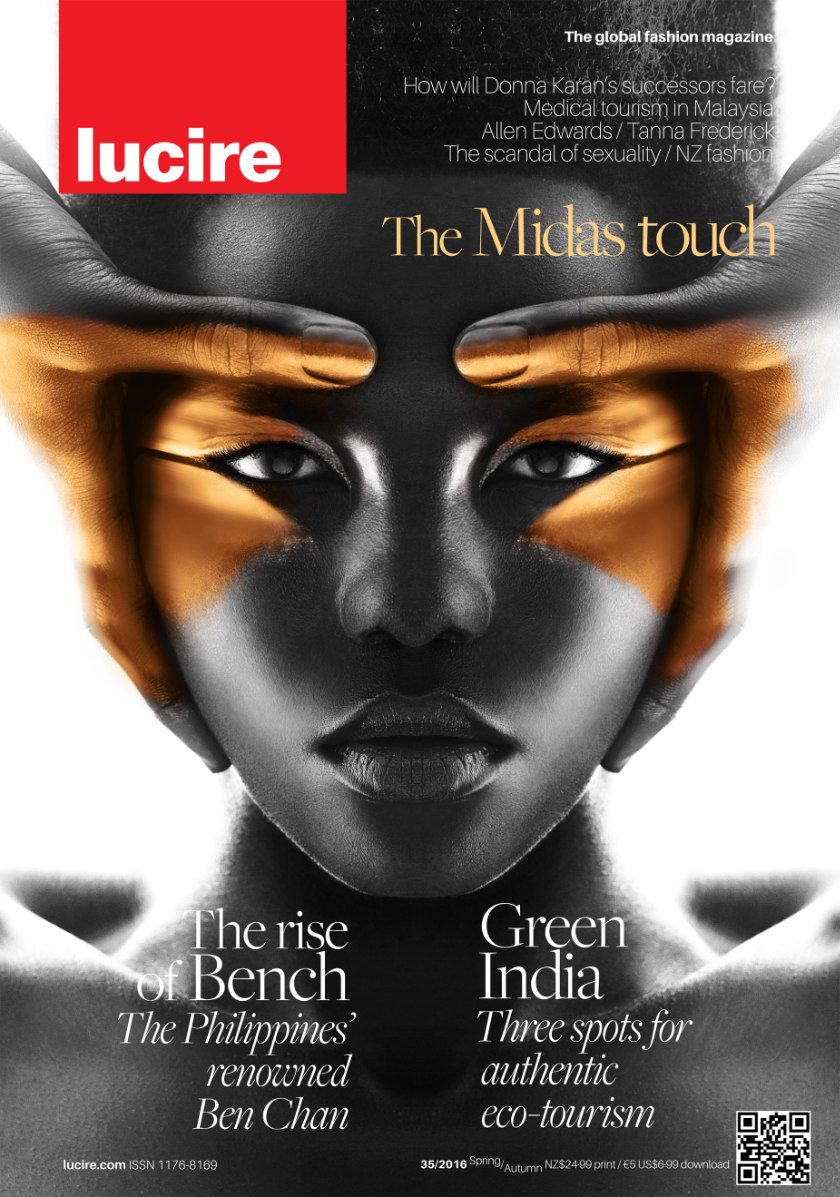 In February 2016, Sopheak and I oversaw another revamp. We decided on a more minimalist cover, and the order inside the magazine changed substantially. I was definitely influenced by Porter at this time, and picked up a bunch of magazines on a trip to London in 2015.

The cover image was perfect to go with this new look. Joanne Gair did the make-up and she was responsible for putting the shoot our way. Jennifer Massaux photographed, Eloise Cheung did the hair, and Margarida was the model.

I believe we made the right choice with this style as we have held on to it (with tweaks) in 2022 and looking back at this issue, it still looks reasonably current. 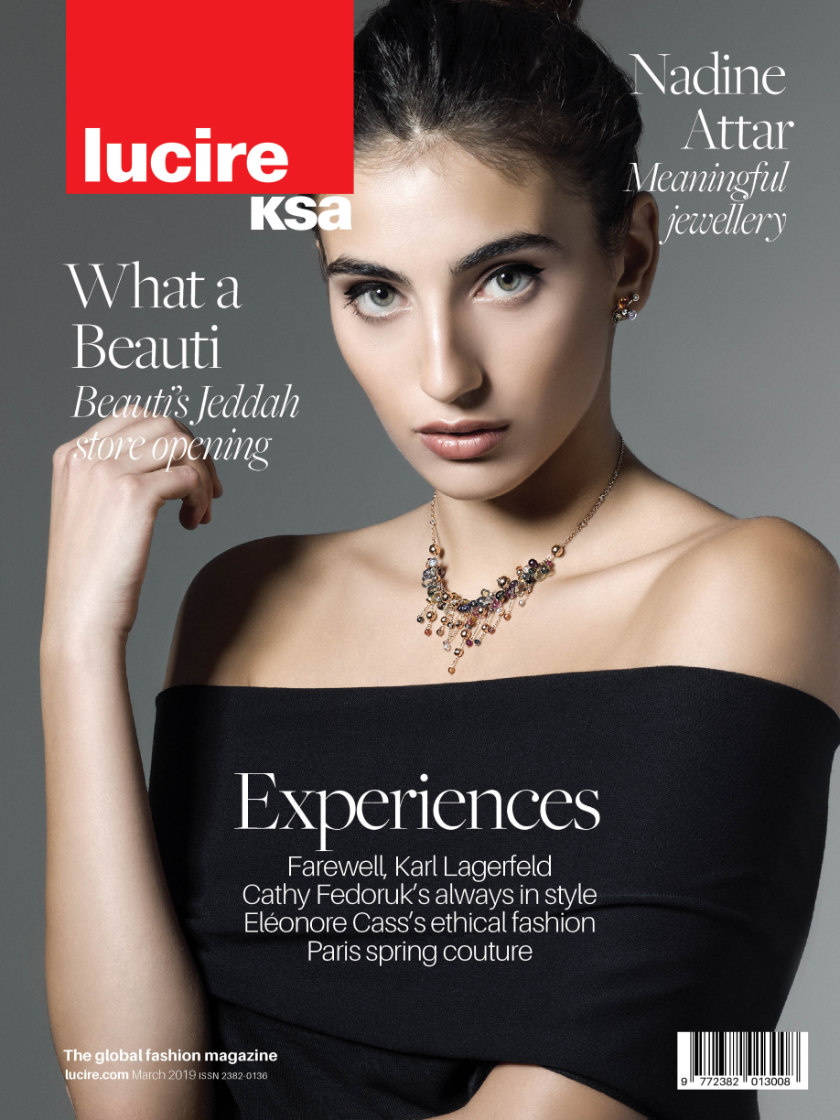 March 2019’s Lucire KSA came together beautifully and we chose to use an image from Nadine Attar’s collection—which seemed appropriate given that she was the main feature story, and we hadn’t shot anything ourselves. We don’t often adopt marketing images, but the quality here matched the level that we expect in Lucire, and it made absolute sense that the KSA audience had a local designer’s work appear on the cover. 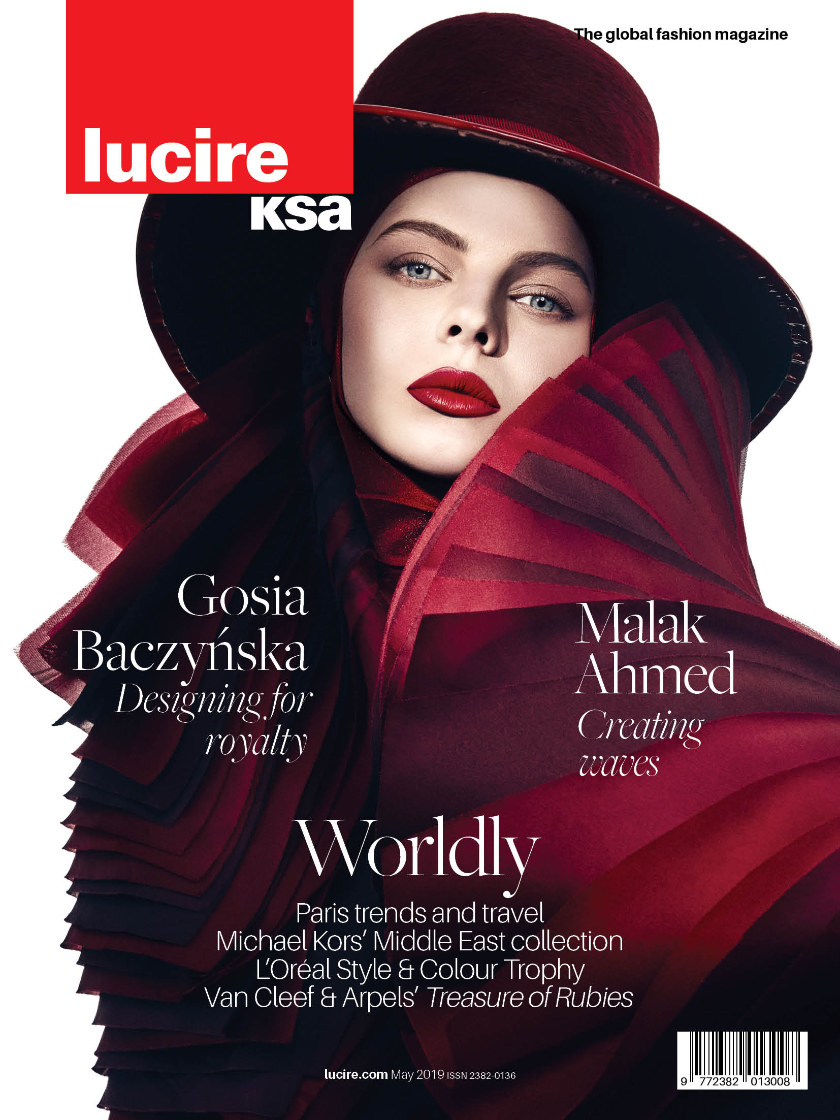 Just two months later, Lucire KSA’s May 2019 number had this stunner from Lindsay Adler, in a shoot we called ‘Far above Rubies’. You can see we’re going toward a more minimalist appearance despite needing all these cover lines, and Lindsay’s composition allowed us to do that. Cannon oversaw creative direction and styling, Joanne Gair did the make-up, and Linh Nguyen styled the hair. Julia Riethof was our cover model here. 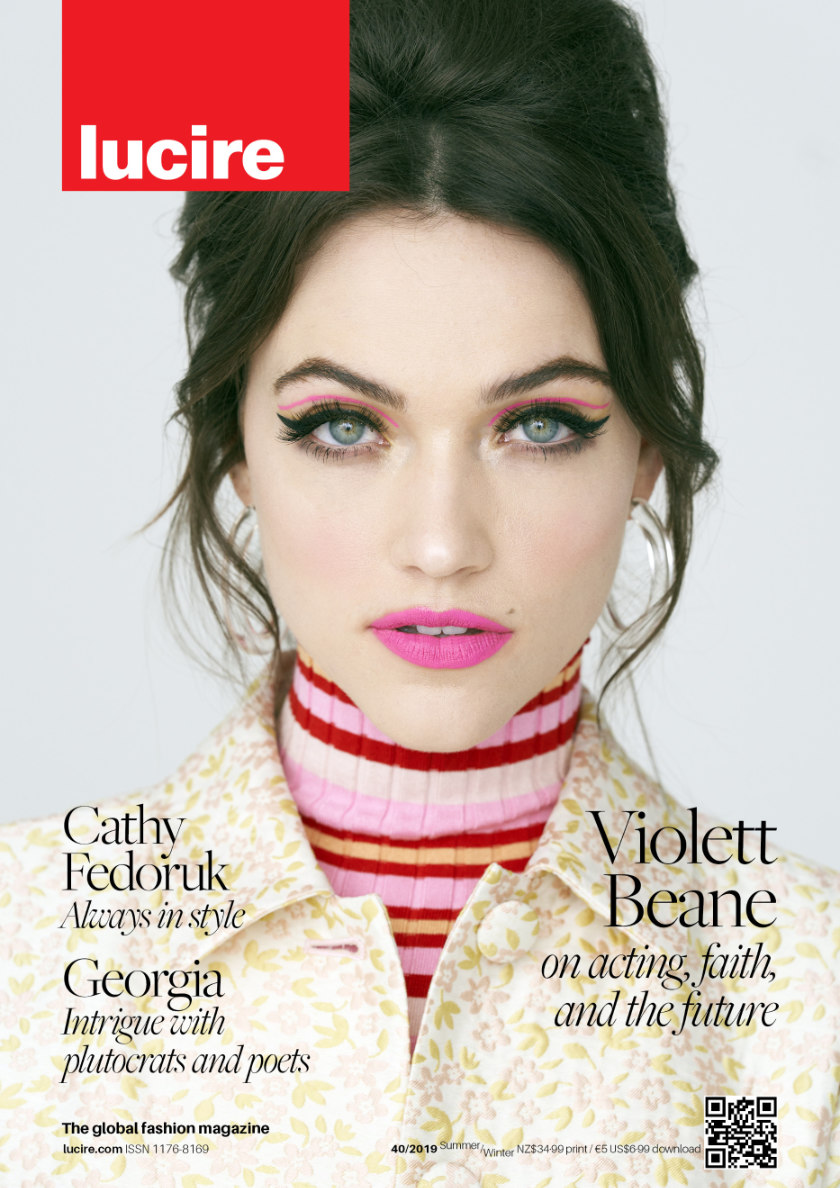 I was very proud of July 2019’s cover, especially as it was used by both Lucire and Lucire KSA simultaneously. We hadn’t managed to line up two editions’ cover stories débuts quite so well before. Jon Moe photographed actress Violett Beane, straight from her TV series God Friended Me, with Jamie Dorman doing the make-up, Brittany Lovoi the styling, and Lino Martínez the hair. 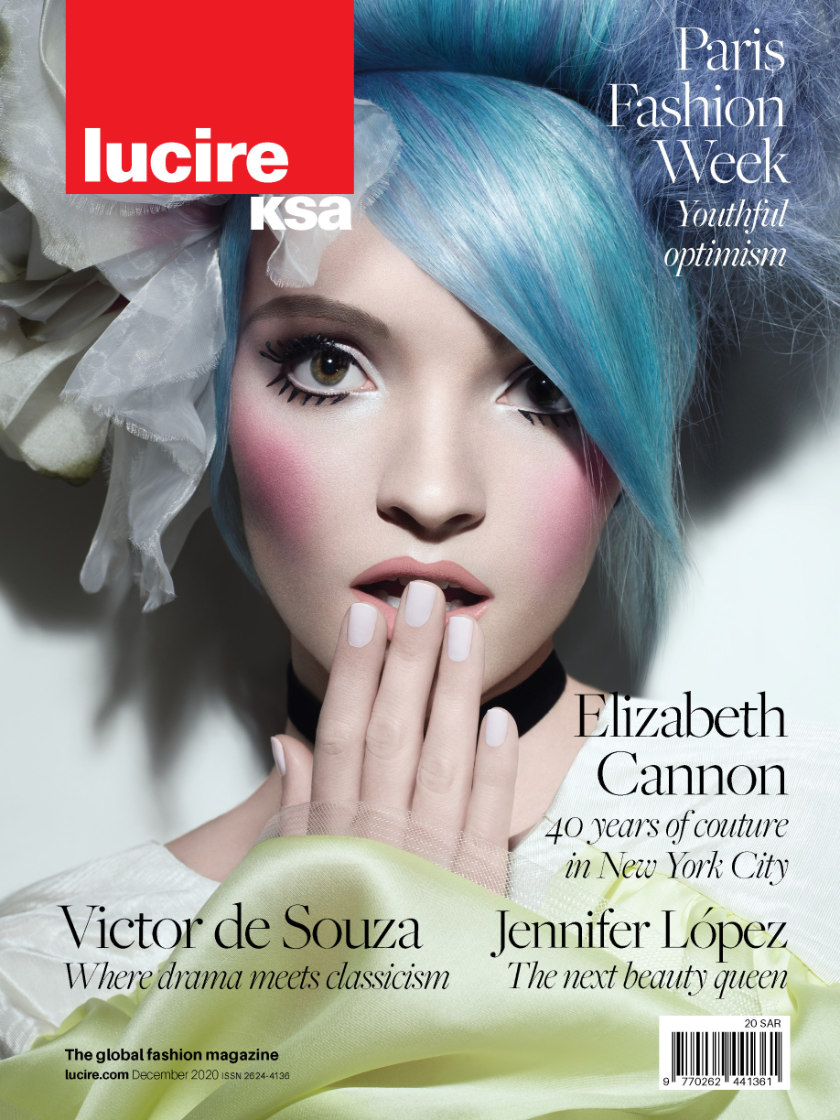 Lucire KSA’s December 2020 number marked the end of a very tricky year navigating the COVID-19 pandemic, affecting production slightly. But thank goodness for the crew there who took all the precautions you expect during such tricky times. Damien Carney photographed, Nikko Kefalas took care of the creative direction and styling, Joanne Gair did the make-up, and Kirsten Brooke Anderson the hair. Elena Sartison modelled, holding the record for the number of Lucire covers. 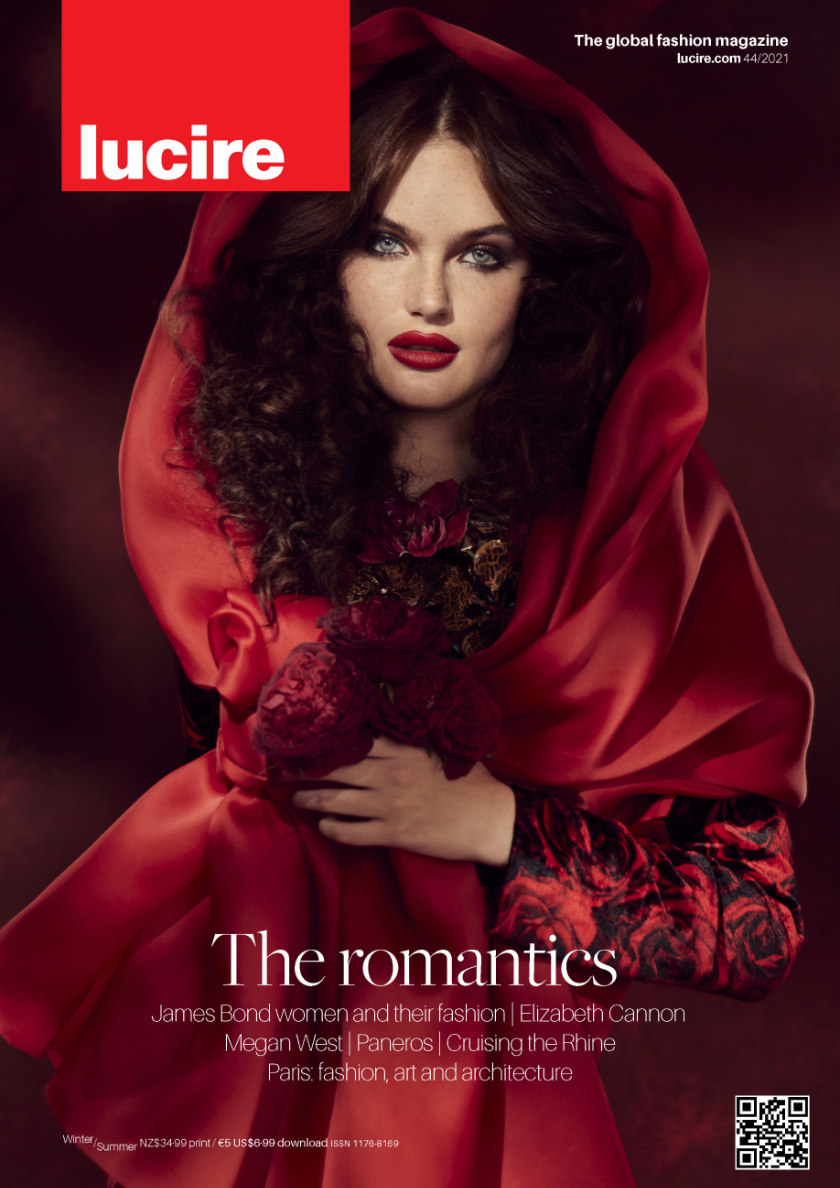 One year later, Lucire issue 44 has one of the most beautiful covers we’ve ever published. I felt we had introduced too much type since the 2016 revamp: it steadily crept back on to the covers. As detailed online, I was influenced by some magazine covers from the early 1970s. And how could you resist giving Lindsay Adler’s stunning photograph pride of place?

Our wonderful Joanne Gair once again did the make-up, Cannon of the Cannon Media Group did the styling, Linh Nguyen did the hair, and Morgan Fletcher modelled. 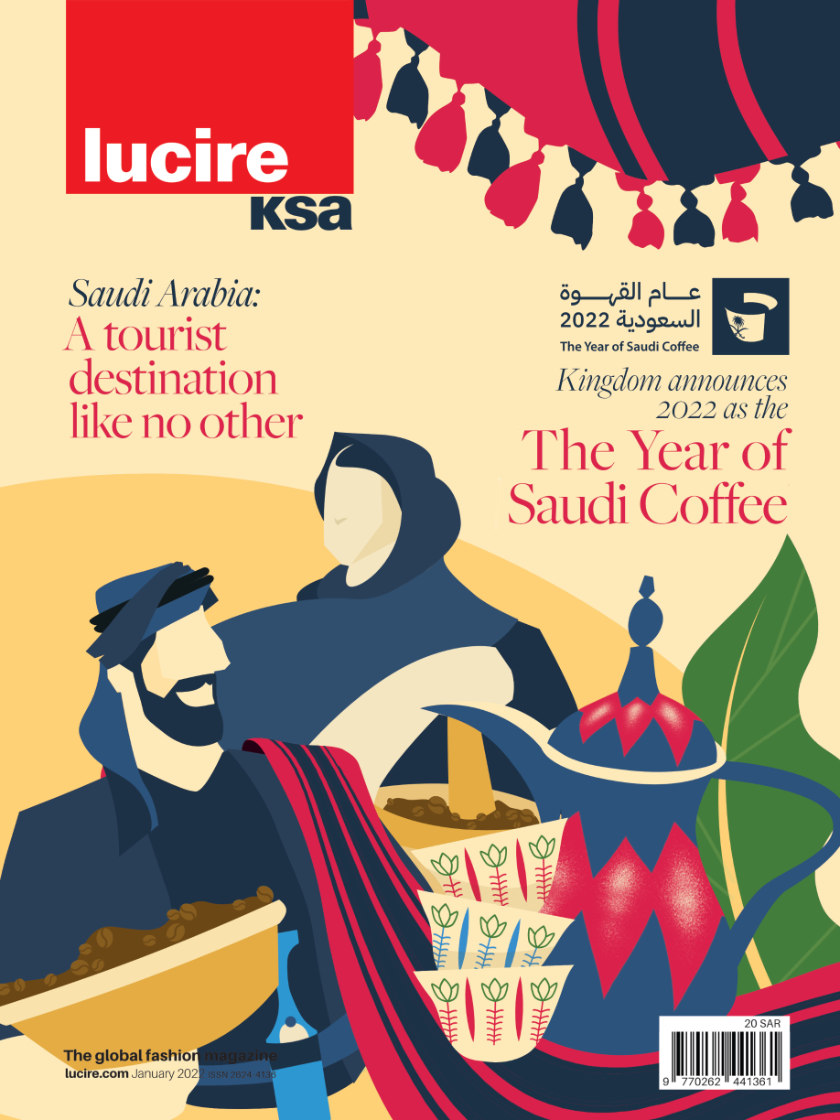 Lucire KSA has a different approach to the original Lucire, and since 2021 it has focused on local cultural stories, to suit its audience. While the first Twinpalms Lucire had illustrations complementing the photography, Lucire KSA’s January 2022 cover is the first to be fully illustrated. Marwa Hussien created the layout for this cover promoting Saudi coffee, and I really like it. Many fashion magazines have had illustrated covers during their history and this one brings brightness and cheer, something we’re happy to see.

Jack Yan is publisher and founder of Lucire.