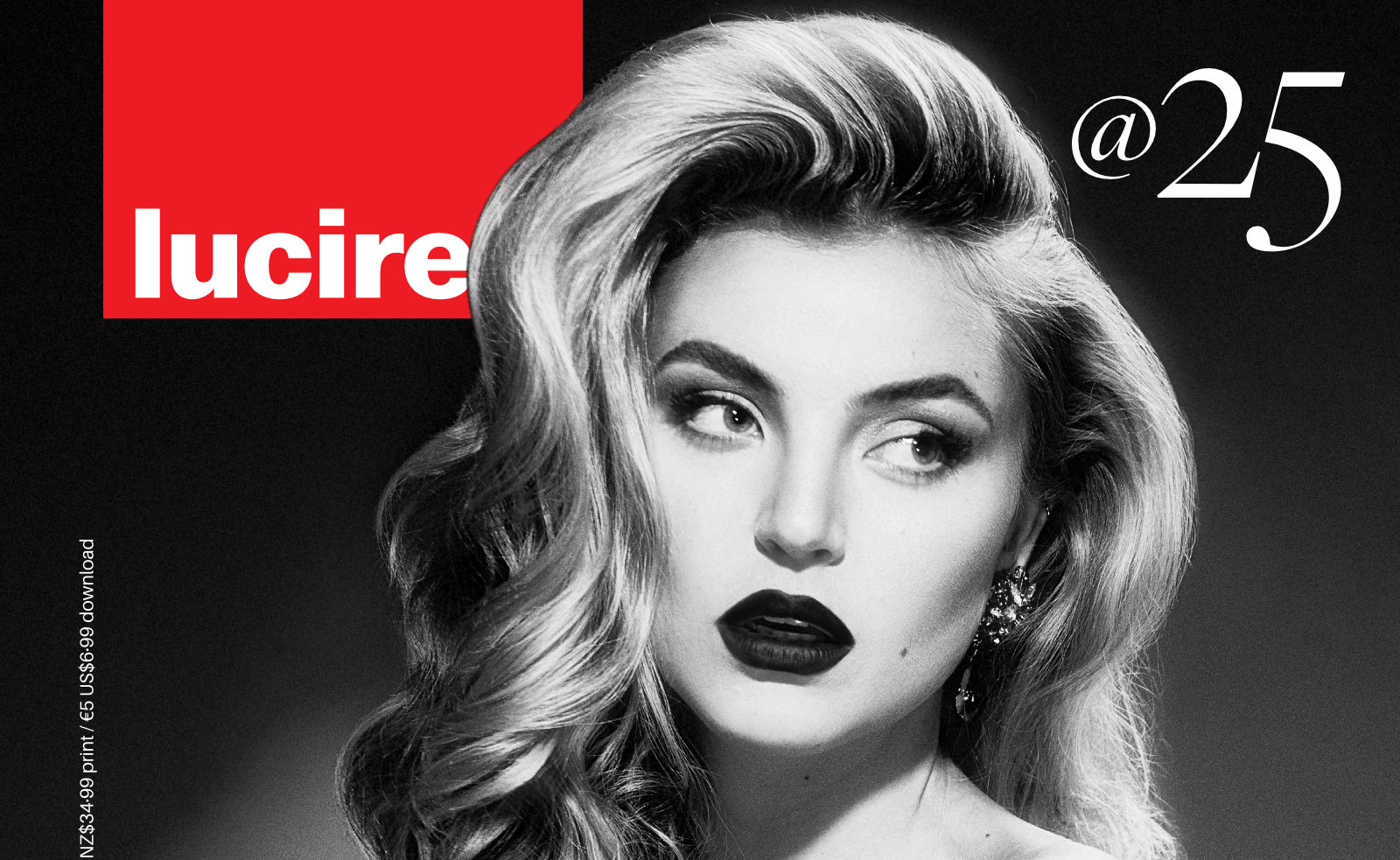 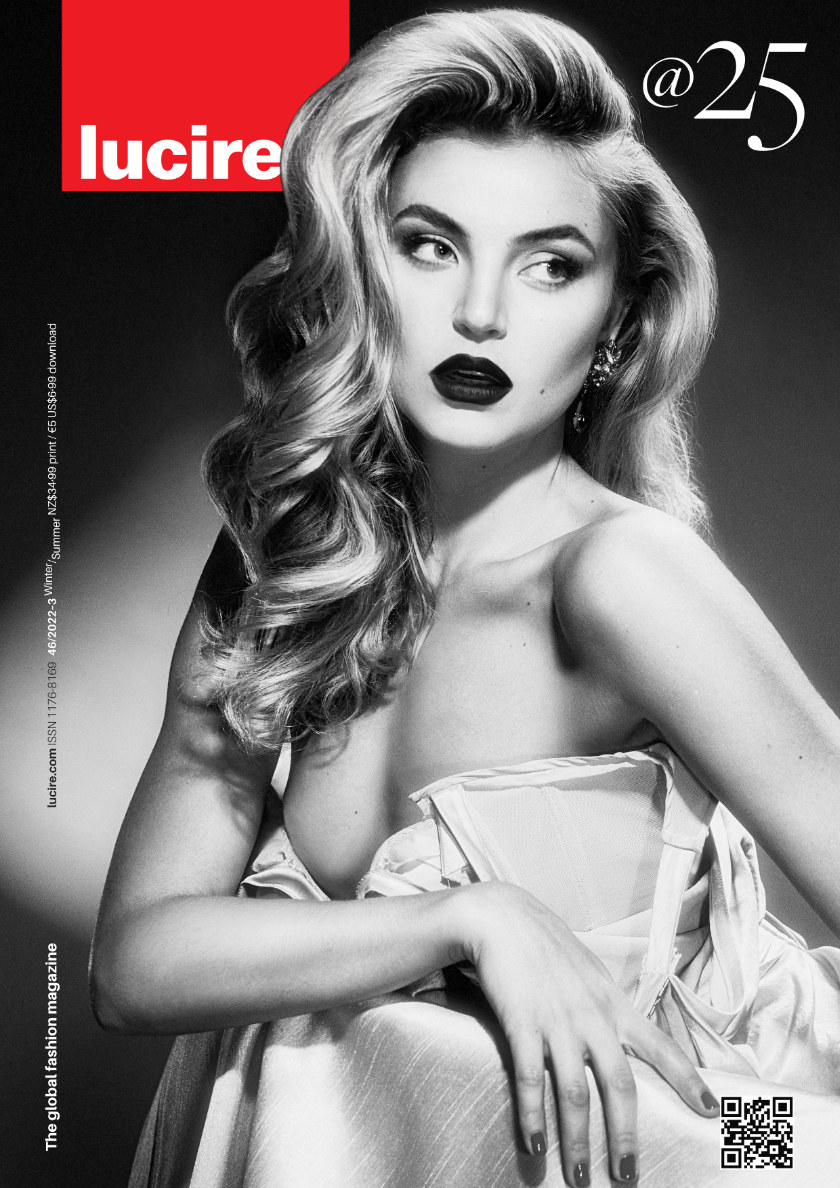 We are, finally, putting the 25th anniversary issue of Lucire on digital retail, and you can order your own copy now, too.

It’s an issue that took longer in production than normal, but we’re happy to be able to show it off, with Lindsay Adler’s cover photograph with styling by Cannon, make-up by Joanne Gair, hair by Linh Nguyen, and modelled by Rachel Hilbert. She’s wearing a gown by the Danes and earrings by Erickson Beamon from Showroom Seven.

It’s a shoot in the style of old Hollywood and we fell in love with all of Lindsay’s images when we first saw them.

Sometimes you just know when you’re looking at a shoot from where the cover will come.

We agonized over getting it right, however, and two versions along the way are shown here. There must have been over a dozen in total. Fashion and beauty editor Sopheak Seng’s version with the gold script is still a favourite and it would have made the issue stand out amongst all of our back issues, too. 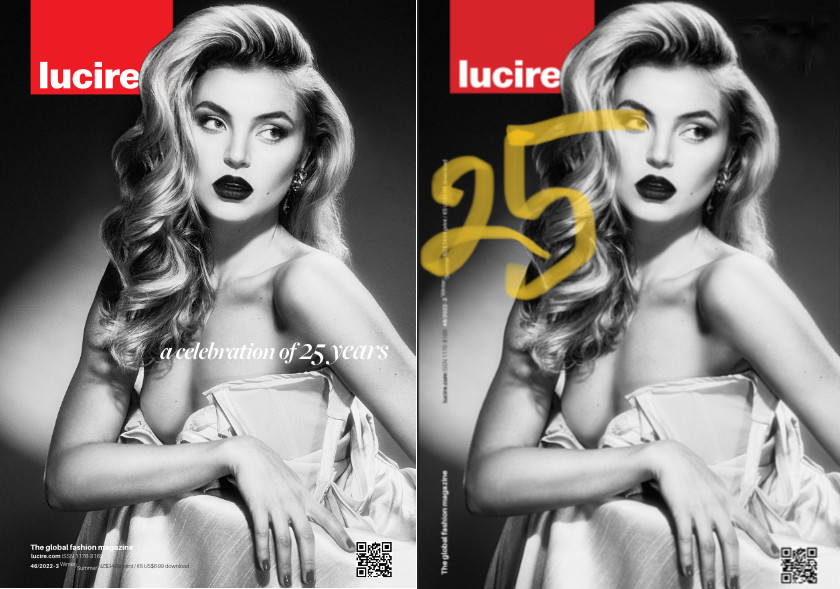 In the end I made the call to go with minimal type rather than hand-done gold brush script, because of timing and a desire to leave Rachel unadorned with type. The photograph had been through an extra round of retouching especially for the cover, and designer Tanya Sooksombatisatian had done the photo editing to put the model’s head in front of the masthead. I didn’t want to hide those efforts.

Who knows? By next week I will have thought Sopheak was right after all and there have been many times when his decisions stood and we wound up with a winner.

The cover photo isn’t just a throwback to old Hollywood. It takes me back to the 1990s when I remembered seeing beautiful imagery like this, with a stunning (super)model, great make-up and hair, and creative styling. Where did all that go? We wanted to bring the glamour back. ’Nineties’ nostalgia? If it was, then it’s fitting for celebrating our founding that decade.

Minimalist type was a must for me given the strength of the photo, though the @ in front of the 25 was something else we did lots of experiments with and spent an unbelievable amount of time on. It’s not something you’d expect! The danger was that some people might have felt it was issue 25 when it’s in fact closer to 50 domestically. So even with less type on the cover, we were still spending plenty of time getting it right. Making this magazine is like a craft for us.

Lindsay’s old Hollywood shoot has so many references to that grand era, reminding me of the period’s photography and greats such as Horst P. Horst. As an anniversary issue, I was thinking something that harked back to the past would suit the flavour; at the same time I wanted something contemporary to show that while we were celebrating our quarter-century, we aren’t standing still. There is, therefore, a wonderful mixture of shoots reflecting this approach. The same philosophy was at play when interviewing Reem Acra (who started her label the same year we started this magazine—it was the reason behind the choice, as well as Reem being a famous name) and Arūnė Jurevičiūtė (who graduated in 2020). Beth Dover and Mandeep Dhillon’s celebrity shoot appearances aren’t to do with the two eras, though we did toy with having an actress whose first feature film appearance was in the same year as Lucire’s début. However, scheduling didn’t work out. One of these days I might be allowed to say who it was.

With this issue, we are making changes to the ordering process, too. With high inflation, we were updating the postage prices across the board for back issues: the way we have it all set up, we have to do each change manually for each issue. (In fact, we lost money on some of these between price rises and inflation rate fluctuations—the profit disappeared into the postage. These are the margins we independents work with.) Few of you ever purchased printed back issues from us in the last couple of years, so from now you can only order the current one here; if you want an earlier one, you can still get it in PDF form from Scopalto for a mere €2·50, and save yourself a lot of money.

If you’d like the facility to order back print issues, please let us know and we can rethink how we do it, maybe with pull-down boxes for issue numbers so we’re not adjusting prices individually.

Other “almost” covers included the below for issue 45, where Meg Donnelly could have made the cut, photographed by Lucas Passmore for Lucire. I went back and forth on this: even after we had gone to press I was wondering if there was a chance of doing a split run. Lucas’s photo provided a greater colour contrast to issue 44’s cover; and Meg is very marketable and has tons of fans. In fact, we did supply a licensee with a Meg Donnelly cover but they chose, as is their contractual right, to replace it.

If I remember correctly, Sopheak made the final call and with hindsight, it was the right one, as much as I love both. He liked its beauty and lavishness, and I liked the pin-sharp focus Greg Alexander used in the shot. It was a different style to Meg’s shoot, which was more documentary. On another day, with differences in the Zeitgeist, we could have gone the other way. 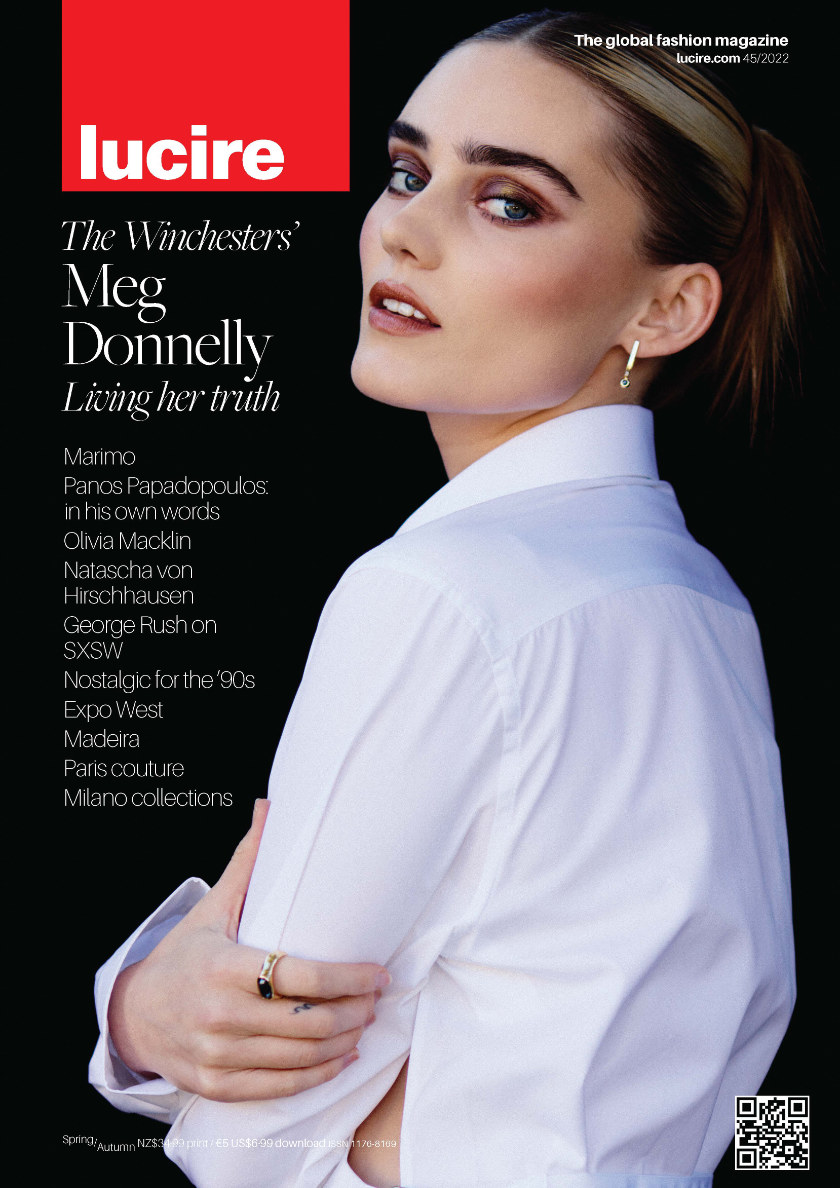 Finally, if there’s any style of fashion photography I’d like to see vanish, it’s one where the models simply look too young. I’m not in publishing to give nonces their jollies. Lately, there have been more disturbing stories (both in quantity and severity) about underage models, something we in the industry should guard against.

One of my first good friends in the modelling business was Paolo Zampolli, and he and I felt very strongly about this. Lucire had been going for a couple of years by this point. Paolo had an agency in New York called ID Models, and he was very adept at courting the media.

It was 1999, when Donal MacIntyre’s exposé on the modelling industry was aired, where it was claimed that male model agency heads sexually exploited young girls. Repercussions were still felt in 2021 when one of the undercover reporters, who posed as a model, alleged that Gerald Marie, then European head of Élite Models, sexually assaulted her. This was 20 years after the BBC capitulated to Élite after it refuted the claims in the documentary and took the broadcaster to court. The documentary has not been repeated since.

There have been other rape and sexual assault allegations against Marie, including from Carré Otis. Marie denies the accusations but from the reports I read, he is under investigation.

Marie wasn’t alone: MacIntyre was also critical of Élite founder John Casablancas; it is a matter of record that he was having an affair with Stephanie Seymour when she was still a child.

Ironically, John went after Paolo on some news item. I thought it was a bit rich coming from a guy who molested a 14-year-old, and I duly defended Paolo in Lucire. I knew how privately, Paolo was scathing about model industry predators. Some years later, he made the connection between a woman called Melania Knauss and some chap called Donald Trump. I knew of Melania well before that and might even have had her ID comp card. But that’s another story.

The fact we haven’t made any real progress on this front shows the toxicity, predatory behaviours and exploitation that continue. Allegations against Pavement magazine here in New Zealand came out in The Spinoff. One woman posted on her Facebook wall about a local fashion blogger who she claimed groomed her at age 11. That chap used to get a lot of interviews in New Zealand media—though some of us could see past his charade.

The modelling industry has heard plenty of allegations but not a seminal #MeToo movement. Is it because Gerald Marie doesn’t have the profile of Harvey Weinstein? It shouldn’t matter: it’s high time that it happened in the industry. I won’t wait another 25 years for it. •