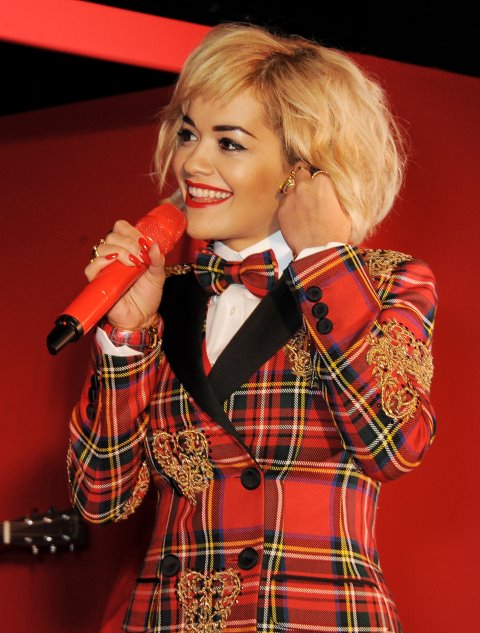 Above Rita Ora at the Rimmel 180th anniversary party in London.

Rita Ora might be already working with Rimmel, as shown in our earlier article on Rimmel’s 180th anniversary party in London, as well as DKNY, but there’s a chance she could be designing for Adidas.
In our video, there has been a rumour that Ora has signed a $2·4 million contract with a sportswear brand, and since the star favours Adidas anyway, it’s likely the German sportswear giant is her new collaborator.
Raf Simons and Stella McCartney have both collaborated with the brand in the past.
As we catch up on coverage now that our publisher’s returned after his election campaign, several features have appeared in the main part of our site.
US West Coast editor Elyse Glickman attended the Emmy suites in Hollywood, while Paris editor Lola Saab hit the GBK suite in New York. Anna Deans reviews Vic Matié’s spring–summer 2014 shoe collection and finds it hard to choose a favourite; and travel editor Stanley Moss takes the back streets of Verona.
As we’ve put many updates via Facebook now, RSS subscribers may have missed earlier stories from the Paris haute couture collections, travel to Toscana and Amsterdam, our features on beauty entrepreneur Michael Hogg, Jade Muirhead and Tessa Metcalfe, an irreverent look at the Biennale di Venezia, and road tests of the Renault Koleos and BMW 320i Edition 30. There’s more in the fashion, ‘Living’ and ‘Volante’ sections as you click through.