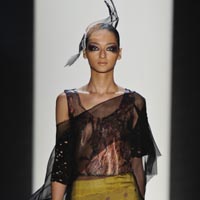 The main part of the Lucire website has had some international fashion round-ups. Not only have fashion editor Sopheak Seng and Paris editor Lola Saab made their picks from the New York fall collections (with more to come), but Joanna Mroczkowska has ﬁled her report from Fashion Philosophy Fashion Week in Poland, and, importantly, Yuka Murai writes about three designers who have deﬁed the odds of the earthquake and tsunami in Japan to release collections.
This last story shows that even though Japan Fashion Week was cancelled after March 11, there are designers who have the bottle to carry on. With help from the organizers of Japan Fashion Week, they persisted: Yasutoshi Ezumi, Fernanda Yamamoto and Van Hongo all showed autumn–winter 2011–12 designs, leading the way and inspiring the industry.
As Yuka writes:

Japanese culture shows that if one part of the nation suffers, the rest is supposed suffer and feel pain by not consuming any extras and luxury goods. This activity is called jishuku in Japanese …
However, there are still many citizens in Japan who try to help the devastated area by not following jishuku, instead contributing positively to economic activity or setting up various support systems for new or suffering businesses. Japan Fashion Week is one of the organizations …

Elyse Glickman meets author and activist, Yangzom Brauen, who discusses her new memoir on Tibet; while publisher Jack Yan tests two very different BMW 5-series models, the 550i and 535d.
Meanwhile, in celebrity news from our colleagues at ITN: screen siren Jessica Alba frankly talks motherhood, with baby no. 2 on the way. And Eliza Doolittle says her legs are not insured for £5 million: it was intended as a joke that was taken literally, and reported.
Doing the rounds on the internet is a story that a hacker has allegedly found his way into Blake Lively’s Iphone, and has leaked nude photographs of the actress. Lively’s reps have said that while the photographs are genuine, they are not of the actress. Not really the sort of thing we cover, but it appears to be in the Zeitgeist and isn’t going away just yet.