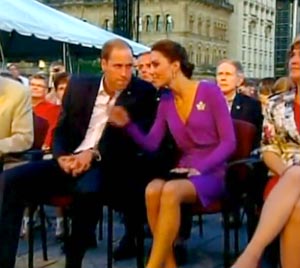 ITN has a summary of a lot of the outﬁts the Duchess of Cambridge has worn on her visit to Canada, including labels such as Catherine Walker, Issa, Reiss and Alexander McQueen, and maple leaf-themed accessories in honour of her hosts.
The Canadian, and for that matter, the British, media have been complimentary about the Duchess of Cambridge’s fashion efforts, agreeing they have done credit to both nations.
There’s also some footage from Prince William’s efforts at street hockey, which we reported on yesterday.
The Duchess, meanwhile, only dropped the ball to recommence the game, and did not participate in playing.
For those of you following Lucire via RSS, there have been a few features on the main part of the site. Jane Sooksombatisatian, sister of our head designer Tanya, has written up her review of Twinpalms resort in Phuket, Thailand, which we feature in our ‘Volante’ section.
Josephine Leong and Ashleigh Berry go through their favourites from Sydney, at its recent fashion week; while Paris editor Lola Saab interviews one of the curators of the Madame Grès exhibition at the Musée Bourdelle. Lola also talks to Hana Al Banna-Chidiac, who worked with Christian Lacroix in putting together the L’Orient des femmes vu exhibition, also in Paris.
As part of the scene in Los Angeles, Elyse Glickman and Leyla Messian have more from celebrity dos, while publisher Jack Yan samples the latest BMW 5-series cars.

2 thoughts on “Kate in Canada fashion round-up, and other features”