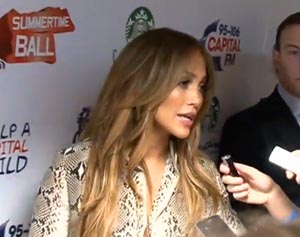 Singer and actress Selena Gomez, 18, has kicked off her tour, performing in Los Angeles to promote her new music and new ﬁlm, Monte Carlo, which Gomez says is a turning point in her career.
The ﬁlm is a romantic comedy which may bridge the gap between Gomez’s Disney image and older roles.
David Beckham has managed to stay in the headlines as one of the highest-proﬁle football players in the world, and, as one of the ambassadors for next year’s London Olympics, he has stated that he is keen to take his sons, and hopefully his future daughter, to the events.
Meanwhile, Jennifer López was able to create plenty of buzz at FM’s Summertime Ball at Wembley Stadium, rocking alongside JLS, Jessie J. and Nicole Scherzinger.
Lopez was unsure what label she was wearing, but her main concern was that it all matched.
And for your fashion ﬁx today, pop over to the main part of the site as Paris editor Lola Saab talks to curator Hana Al Banna-Chidiac about Christian Lacroix’s involvement in L’Orient des femmes vu at the Musée du Quai Branly.