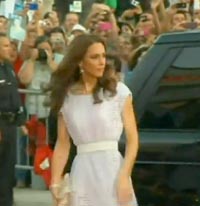 We virtually had a blow-by-blow of the Duke and Duchess of Cambridge’s arrival in Beverly Hills last week, thanks to a friend of the magazine updating her Facebook. And now that Prince William and Princess Catherine have settled in as part of their American tour, they’ve begun promoting British ﬁlm in Hollywood—not to mention Brand Britain itself.
Princess Catherine arrived for the Saturday evening event, BAFTA Brits to Watch, at the Belasco Theater, wearing an Alexander McQueen lilac dress. She had also worn the label during her Canadian engagements.
Prince William is president of BAFTA, having succeeded Lord Attenborough last year.
To promote young talent, 42 British creatives were also invited, rubbing shoulders not only with the royal couple, but Nicole Kidman, Jennifer López, Jennifer Garner, Anna Kournikova, Jason Bateman, Barbra Streisand and James Brolin, Blake Lively, Tom Hanks and Rita Wilson, Harvey Weinstein and Nigel Lythgoe.
The Prince alluded to The King’s Speech at the event. ‘Before I start, I’d just like to thank Colin Firth for my opening line: I have a voice,’ he joked.
He also stated, ‘Please give them the opportunities you have always extended to some of the brightest and best that Britain has to offer. When American and British creative talent gets together, magic happens.’

Meanwhile, of course, we updated the web edition of Lucire yesterday, though not the news section. Anita Talbert checks out Babalú in Miami, Fla., with one of the funkiest and most fashionable product ranges we’ve seen in a single store in quite some time. Lola Saab, meanwhile, interviews Zoran Bosanac at Cerruti and looks at the label’s spring–summer 2012 menswear range.