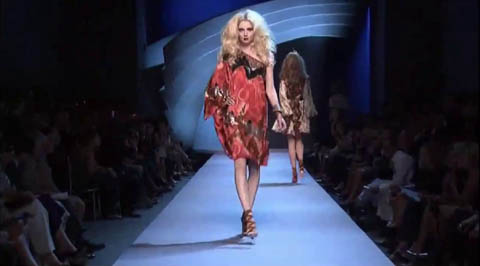 Christian Dior’s autumn–winter 2011–12 haute couture show lends a bit of playful relief, following the house’s recent ﬁasco regarding the sacking of its former creative director John Galliano. Bill Gaytten, accompanied by his assistant Susanna Venegas, has stepped up to the challenge to be considered as the new creative director and on July 4, presented his ﬁrst couture collection.
Although each piece is beautiful in its own right, at times it is like looking at three, sometimes even four, separate collections. As if Gaytten’s ideas ran away with him and got lost in translation. With no apparent theme or stable reference points, the show lacks ﬂuidity, which would be achievable through a greater attempt at editing. It all results in a sense that everything which had been dreamed up over the past 23 years while under Galliano’s reign has now been let loose.
The ﬁrst few outﬁts consist of voluminous skirts and layered, folded and unﬁnished silk organza and taffeta pieces, resembling pastel coloured taffy, while paying respect to Dior’s signature Bar jacket silhouette. After that, each outﬁt gradually morphs into an eccentric mix of shape, colour and bold animal and mosaic inspired prints, channeling the 1980s furniture and product design Memphis movement. From there on the collection continues to descend into a confusing kaleidoscope of ’70s style geometric patterns and random clusters of feathers. The show draws to an end with ball gowns draped in tinsel or splashed with crystals, ﬁnally ended with Karlie Kloss themed as a Pierrot, in a sumptuous gown sprinkled sparsely with large round sequins.—Vicki Matias