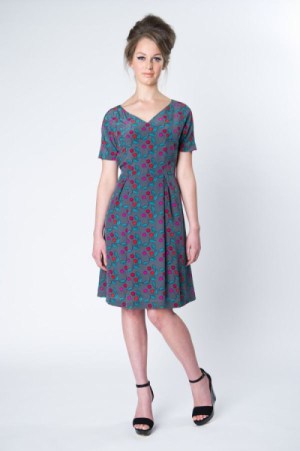 Above The last image posted on Ashley Fogel’s Facebook page, on October 30, before the bad news was released. Hair and make-up by Lea Hoare of Hil Cook; photography by Louise Hatton; modelled by Elizabeth of Kirsty Bunny Management.

Citing health and the poor economic climate, Ashley Fogel has announced the closure of his label and, with it, his Miramar, Wellington factory ,after 40 years of designing and manufacturing women’s clothing.
Fogel, who had suffered a heart attack in April and underwent double bypass surgery, said that he had to prioritize his health.
A release from the company also noted that the tougher economic climate and the disappearance of mid-tier owner-operated boutiques made distribution more difficult.
‘Over the last years we have adapted, in every possible way, to the new trading conditions, with initiatives such as making offshore to be more competitive, and opening our online store earlier this year. However, the slow pace of forward sales and strong New Zealand dollar [are] meaning people are increasingly buying offshore,’ he said in the release.
Ashley Fogel’s well respected and long-lived brand follows the closure of the acclaimed Alexandra Owen label earlier this year.

One thought on “Ashley Fogel closes its doors after 40 years”