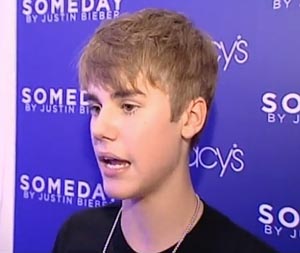 Musician and teen heart-throb Justin Bieber has launched his new fragrance, Someday, at Macy’s Herald Square.
The ﬂowery, fruity fragrance is targeted at women. Bieber says he had the opportunity to choose the scent, and had input in the packaging design, which is a ﬂower made of hearts.
The name is meant to be aspirational, according to Bieber. ‘Someday I will be an astronaut, someday I will buy a Mercedes … I wanted that because it’s like their dream.’
Étoile Nation Beauty is behind the fragrance, rather than one of the traditional houses.
While one star rises, another descends. Veteran actor Peter Falk passed away peacefully at his Beverly Hills home this week, aged 83.
He was best known for Lt Columbo, the third actor to take the role, portraying the deﬁnitive version of the character on and off between 1968 and 2003 on TV. A successive stage version of Prescription: Murder (which had also run prior to the TV series) saw John Guerrasio modelling the looks of his Columbo after Falk.
The cause of death was not stated, but Falk had been suffering from Alzheimer’s disease and dementia.