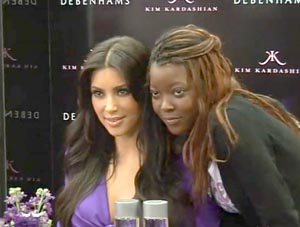 One is a reality TV star turned entrepreneur. The other is an entrepreneur turned reality TV star.
Kim Kardashian was in London for the Glamour awards, at which she received the Entrepreneur of the Year Award.
And in that spirit, she went to Debenhams on Oxford Street to launch her new eponymous fragrance, to the delight of her fans.
While we can see some appeal to Kardashian’s fame, one that she has been able to capitalize wisely on, another programme that the TV Guide Network sent us today, also shown below, has us puzzled.
It’s called Nail Files, starring Katie Cazorla, the ﬁancée of a composer and producer we admire, Walter Afanasieff.
The fact that we’ve embedded the YouTube video rather than use the version we were sent says something: we made a call that it wasn’t worth the extra effort of an upload.
Based on these 60 seconds, everything has been edited to make it seem more dramatic than it really is—and, while Cazorla is probably quite a level-headed businesswoman to get to where she is, the clips make her look over-dramatic and even nasty. Some of her staff don’t look too bright.
We’ve always known this, as most reality TV-watchers do, conﬁrmed by many friends over the years who realize that producers decide on an angle and it’s all edited to suit.
Here’s what they’re going for:

The series takes a look at the driven yet colorful Katie as she aspires to take the Painted Nail to the next level. With the support of Walter and her ever-present best friend Amy, Katie hosts gifting suites at the Sundance Film Festival and the Oscars, walks the red carpet at the Grammy Awards, launches her spring line of polishes, and handles her celebrity clients all while placating her trouble-making staff. Katie’s life may seem glamorous, but keeping all the balls in the air without stumbling is a daily challenge.

We admit that the 60 seconds are all we have seen. And we are giving a thumbs-down based solely on the trailer. Nail Files won’t be on our must-see list: the day-to-day dramas of a celebrity nail salon owner don’t sound like our cup of tea.
It all makes us wonder again: when will this reality TV fad end? The smart money says: not for a long time, not while this stuff is cheap to produce and gets viewers. And, judging by past performances, this will get fans, but not too many of them will be coming from this title’s audience.