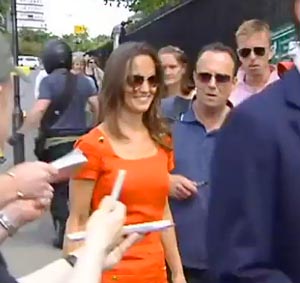 ITN has footage below of Pippa Middleton—P-Middy, as the press has dubbed her—at Wimbledon, looking cheerful in a persimmon dress as she arrives at the All England Club with boyfriend Alex Loudon.
Since the Royal Wedding, the sister-in-law of Prince William has received plenty of paparazzi attention, and the appearance of her with Loudon should end recent media speculation that the couple have split.
While there’s Transformers 3 buzz around the world, star Shia LaBœuf has admitted to having had a ﬂing with his lead actress, Megan Fox, during the ﬁlming of the ﬁrst outing.
Finally, singer–songwriter Alicia Keys has met her Doppelgänger at Madame Tussaud’s New York. Keys unveiled her waxwork likeness while there’s a lot of buzz around her: she celebrates 10 years since her début, and she will produce a Broadway revival of Stick Fly, opening in November.