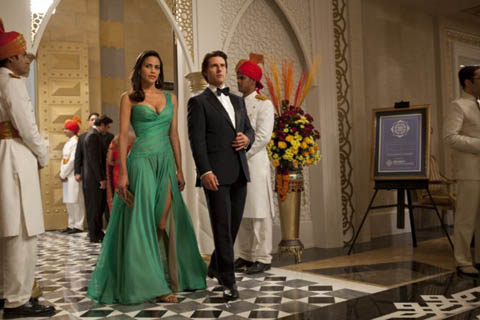 Top Paula Patton and Tom Cruise in Mission Impossible: Ghost Protocol. Above Part of the new ﬁlm is set at the Burj Khalifa in Dubai, UAE.

The trailer for the fourth modern-era Mission: Impossible ﬁlm, subtitled Ghost Protocol, has been shown, starring Tom Cruise and Jeremy Renner. The ﬁlm has been produced by Cruise, J. J. Abrams and others, ending the production relationship Cruise had with Paula Wagner, who had worked on the ﬁrst three.
The trailer looks spectacular with more locations (Bangalore, Mumbai, Dubai, Prague and Vancouver) and stunts, and Brad Bird (The Simpsons, The Incredibles) directs.
Simon Pegg (but not Ving Rhames) returns from the last outing, while Léa Seydoux (Midnight in Paris) increases her Hollywood acting résumé with the new ﬁlm. Paula Patton (Déjà Vu, Swing Vote) is the female lead.
BMW is behind some of the product placement in the movie, which sees both 6-series and i8 models appear.
Fans of the late Peter Graves and the original series might want to look elsewhere for stories deemed canon (after all, the colon between the original title name has disappeared in the trailer), but it appears Cruise will, as before, pack in plenty of action into what may be his last Mission.
In other entertainment news, we have declined to report on Cheryl Cole’s changing hair colour. However, ITN has compiled a “the rise of Cheryl Cole” report below for all those who had no idea who she was, showing where the former Miss Tweedy got her start, her brief marriage to Ashley Cole, the recent media interest in the US version of The X Factor, and a potential Girls Aloud tour in ’12. Cole turns 28 on July 1.