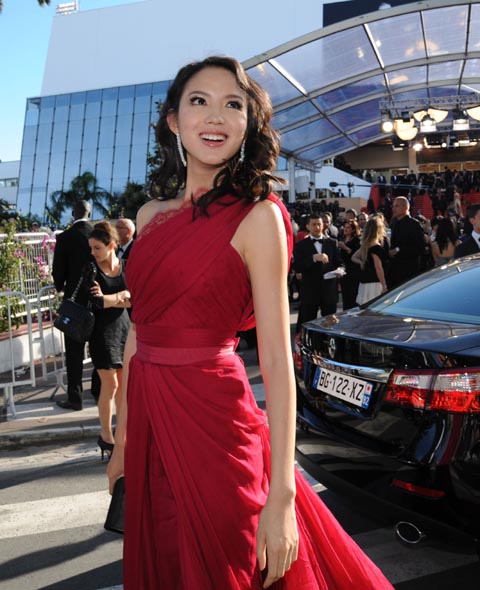 China’s biggest model at present, former Miss World (2007) Zhang Zi Lin, one of L’Oréal Paris’s many faces, talks about her early aspirations, her career in modelling, and her Elie Saab (‘one of my favourite designers’) dress that she wore to the première of Tree of Life at the Festival de Cannes.
We’ve a bit more from Naomi Campbell’s Fashion for Relief function, including the red carpet arrivals, and a lot more from the catwalk show at the marché Forville in Cannes.
The entertainment world outside Cannes has continued. Oprah Winfrey ﬁlmed her ﬁnal eponymous shows in Chicago, Illinois, in front of 13,000 fans and A-list celebrities. Tom Hanks, Tom Cruise, Will Smith and Jada Pinkett-Smith, and Michael Jordan were among the celebrities paying tribute to Winfrey after 25 years with her highly successful talk show.
Winfrey is expected to put more work into her cable TV network.
And while our last little item from ITN is meant to be a US X Factor gossip piece, they show more of Cheryl Cole’s appearance wearing her Stéphane Rolland dress at the Cannes Film Festival last week. We’ve had photographs—now we have some video.