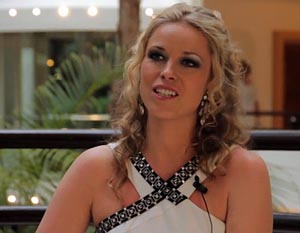 The AmFAR Cinema Against Aids function held on Thursday was the social highlight this week.
Celebrities at the event, hosted at the Hôtel du Cap-Eden-Roc in Antibes, included supermodel Naomi Campbell, Janet Jackson, Kiera Chaplin, Gwen Stefani, Goldie Hawn, Michelle Yeoh, Milla Jovovich, Patrick Dempsey, Harvey Weinstein, Jane Fonda, Donatella Versace, Brooke Shields, Freida Pinto, Michelle Rodriguez, and Courtney Love, and red carpet coverage is shown below. Sarah Ferguson, the Duchess of York, might have been snubbed at the Royal Wedding, but she was welcome in Cannes, and, alongside Campbell, Jackson, Fonda, Weinstein and others, offers a few words about the event.
This year’s AmFAR event pays tribute to its founder, the late Dame Elizabeth Taylor.
Prior to the event, actress and model Chaplin, great-granddaughter of Charlie, dressed in Versace, talks about looking forward to the AmFAR auction and the Festival de Cannes ﬁlms.
Meanwhile, Lebanese actress–director Nadine Labaki discusses her new ﬁlm, Where do We Go Now?, which premièred during the Cannes Film Festival. We also have coverage of the Pater press conference with director Alain Cavalier and star Vincent Lindon, and a separate interview with Lindon (in French with English subtitles).