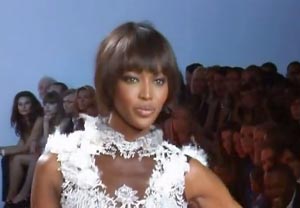 We now have footage from the catwalk at Naomi Campbell’s Fashion for Relief show, beneﬁting the victims of the Japanese earthquake and tsunami.
Supermodel Campbell herself led the catwalk, while Jane Fonda and Wilnelia Merced-Forsyth—with a comic turn from her husband Bruce Forsyth (below right)—considerably outshone many of the younger models at 73 and 51 respectively. And quite a number of models fell at the catwalk at the marché Forville.
Fashion for Relief has, to date, raised £4·5 million for charity. 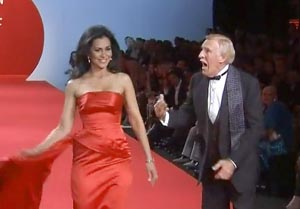 Further footage from the red carpet at the Tree of Life première has also been released by our colleagues at Cinémoi and ITN.
Below are also: a video interview of Michael Sheen, who appears in Woody Allen’s Midnight in Paris; a preview of Valerie Donzelli’s very personal and moving ﬁlm, Declaration of War, along with an interviews with Donzelli and Jérémie Eklaim (in French with English subtitles); interviews with The Artist director Michel Hazanavicius and actors Jean Dujardin and Berenice Bejo; Jean Pierre and Luc Dardenne, directors of The Kid with a Bike, which is in contention at the Cannes Film Festival; and a run-down of Finnish director Aki Kurismaki’s ﬁlm, as presented by Jonathan Ross.

Fashion for Relief at Cannes 2011

The Kid with a Bike

3 thoughts on “Cannes updates: Tree of Life, Fashion for Relief, and exclusive interviews”