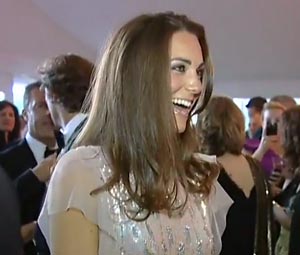 Princess Catherine is on her way to becoming the most photographed woman in the world, as she was spotted Thursday at a charity event wearing a Swarovski crystal-studded Jenny Packham dress, matched with a pair of £175 L. K. Bennett shoes.
She and Prince William were guests of honour at a 900-strong event for the ARK charity gala in their ﬁrst ofﬁcial engagement as a married couple.
The £10,000-a-head event saw entertainment from DJ Mark Ronson and Kings of Leon.
ARK is supported by a foundation run by the Duke and Duchess of Cambridge and Prince Harry, to continue the charity work done by the Princes’ mother, Diana, Princess of Wales.
Meanwhile, their former aunt, Sarah Ferguson, the Duchess of York, will début her show, Finding Sarah, on the Oprah Winfrey Network, this Sunday. The series sees the Duchess battle her demons and rediscovers herself. In the brief clip below, she thanks Winfrey for helping her get back on her feet.
In related news with a royal mention, entertainer Bruce Forsyth appears in the Queen’s birthday honours’ list. The 83-year-old host of Strictly Come Dancing is to be knighted. Forsyth already has a CBE, which was awarded to him in 2005. He was last seen on our pages at the Festival de Cannes, where his wife Wilnelia appeared on the catwalk for Naomi Campbell’s Fashion for Relief show.

Nice to see you, knight